You could be eating killer courgettes

When the pandemic left millions stuck at home, bored Britons took to their gardens to grow their own vegetables.

Seed suppliers sold out within weeks of lockdown, and the Royal Horticultural Society reported a five-fold rise the number of calls and emails from people seeking advice. After all, what could be healthier than being out in the fresh air cultivating delicious home-grown veg – just like Tom and Barbara in the 1970s classic TV comedy series The Good Life.

Not only does it bolster our mental health, it also reduces our weekly shopping bills at a time of economic uncertainty.

But according to some worrying reports, growing your own veg can seriously damage your health, rather than improve it.

According to some worrying reports, growing your own veg can seriously damage your health, rather than improve it. Dozens – possibly hundreds – of gardeners are thought to have been poisoned in recent months by eating home-grown courgettes laden with harmful toxins (stock)

Dozens – possibly even hundreds – of gardeners are thought to have been poisoned in recent months by eating home-grown courgettes laden with harmful toxins. Symptoms range from crippling stomach cramps, violent vomiting and diarrhoea to, in some cases, severe trembling, fever and terrifying hallucinogenic dreams.

‘I was desperately ill, shaking and sweating and having mad, hallucinogenic dreams,’ he said.

‘It knocked me out. It’s the worst illness that I’ve ever had and I lost 10 lb in just four days.

‘The courgette looked great, you would never have imagined there was anything wrong with it. But after that experience I don’t think I will eat another ever again.’

Mike is far from alone. On an online forum run by the Brighton And Hove Allotment Federation, for example, about 30 people – from different parts of the country – have reported being violently ill in the past few months from eating home-grown courgettes.

One sufferer said: ‘I was up all night. I cannot remember ever feeling so wretched from food – the stomach cramps were appalling.’ 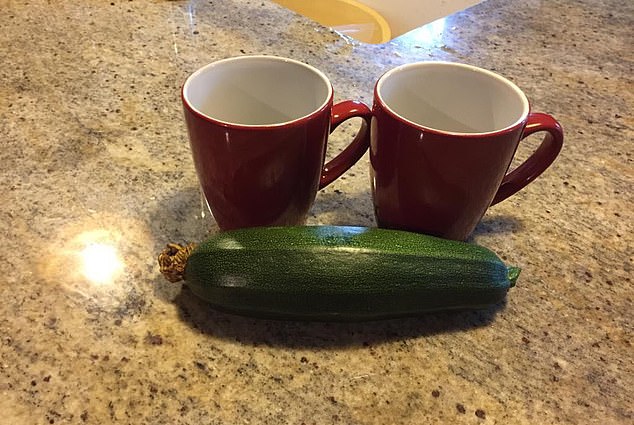 Mike Andrews, 64, joined dozens in the UK who have fallen victim this summer to a rogue batch of poisonous homegrown courgettes (pictured: the courgette that led to the poisoning)

Another wrote: ‘I had to call an ambulance at 4am as my wife collapsed four times and was very ill.’

And for the elderly and frail, the effects are potentially very serious. Another keen gardener told the forum: ‘This happened to my 87-year-old mother and she was violently ill. I had to call 999 in the middle of the night and a week later she’s still not back to normal.’ Others even tell of accidentally poisoning dinner party guests by feeding them courgettes from the garden.

UK data on courgette-related poisonings is sparse. However, a 2018 investigation in France uncovered more than 350 cases linked to toxic vegetables over a four-year period, according to a report in the Journal of Clinical Toxicology. A quarter were linked with home-grown veg.

In very rare cases, it can even be fatal. In 2014, a pensioner from Hildesheim in Germany died after eating a stew made with courgettes given to him by a neighbour from their allotment. So how can lovingly tendered, chemical-free, home-produced veg be so bad for us?

First, it’s not just courgettes that are the problem, they just happen to be a more popular grow-your-own option in the UK. Cucumbers, squash and pumpkins can all have the same effect – in fact, the condition has been dubbed Toxic Squash Syndrome.

WHAT’S THE DIFFERENCE… between serum and plasma?

Plasma and serum are both terms to describe the liquid part of the blood rather than the blood cells.

Plasma carries proteins, nutrients and chemicals around the blood as well as transporting waste products to the kidneys.

Serum is the term used for plasma once certain components have been removed, namely the clotting compounds, in order to carry out a blood test.

This process, which involves mixing the taken blood with chemicals in a test tube, allows testing for things like cholesterol levels, as well as certain diseases and conditions.

They all come from a family of plants that naturally contain high levels of chemicals called cucurbitacins, which protect them against insects and disease but which are toxic to humans – even when boiled, roasted or fried. Commercial vegetable growers use seeds genetically engineered to be free of these chemicals, which also removes their bitter flavour, so that the end product is palatable. That’s why cases of poisoning from eating supermarket vegetables are unheard of.

But, occasionally, rogue batches of seeds for domestic use seem to slip through the net.

In July, one of Britain’s top plant seed suppliers – Suffolk-based Mr Fothergill’s – issued a product recall after it emerged it had inadvertently released a consignment of courgette seeds with very high levels of cucurbitacins. The company acted after receiving ‘a handful’ of complaints from customers that their home-grown harvest made them violently ill.

It said it was the first time in 40 years such a slip-up had occurred. But buying contaminated seeds is only part of the problem.

Some experts warn that heat stress – such as the hot, dry conditions much of Britain experienced in April and May – can drive up toxin levels in the veg.

However, many gardeners collect seeds from their vegetables at the end of the season and save them to grow new plants the following year. Normally this is not a problem, unless the plant – whether it’s a courgette, cucumber, squash or pumpkin – has been accidentally cross-pollinated. This is when it has come into contact with pollen from another plant of the same family that still has high levels of toxic cucurbitacins.

‘Many gardeners like to grow what we call ornamental gourds,’ says Guy Barter, chief horticulturist at the Royal Horticulture Society. ‘These are non-edible types of squash, pumpkins or courgettes that are very bright and colourful and are grown as a form of decoration around the garden.’

With their bright yellow, green or orange skins, gourds are often used to perk up dull flowerbeds, or even add colour inside the home. But unlike their edible cousins, they retain high levels of toxins.

‘Problems arise when the same bees pollinate both the ornamental gourds and the edible vegetables,’ says Barter.

‘The insects have a flying range of roughly two miles, so if anyone is growing ornamental gourds within a two-mile radius of your garden, there’s a chance your vegetables could be cross-pollinated.’

This does not affect the current crop but means any seeds saved to plant on the following year could be poisonous.

But how can gardeners tell if their vegetables are toxic?

‘It’s only by taste,’ says Barter. ‘If you are worried, I’d recommend cutting off a tiny slither to taste – raw or cooked – and if there is the slightest hint of bitterness, discard the fruit immediately and remove the plant in question from your garden.

‘I once had a courgette plant that I grew from cross-pollinated saved seeds, and after one mouthful I spat it out as it tasted so disgusting. Luckily, I didn’t get ill.’

The RHS says cases of poisoning are still rare but the risks can be reduced by not saving seeds from one year to the next and only buying brands that carry the RHS Award of Garden Merit.

Will the U.S. Open Show Big Events Can Return to New York?