After months of speculation and discussion, Pakistani Prime Minister Shahbaz Sharif has appointed Lt. Gen. Syed Asim Munir as Army Chief of Staff and Lt. Gen. Sahir Shamshad Mirza as the new President. of the Joint Chiefs of Staff Committee.

The news was announced by Information Minister Marriyum Aurangzeb through a Twitter announcement, saying the Prime Minister had made his choice in the exercise of his constitutional authority.

Lieutenant General Munir, also promoted to four-star general, will succeed General Qamar Javed Bajwa, whose term is due to end on November 29.

While the Pakistani army has a new leader, here’s what we know about him.

Lieutenant General Munir is an exceptional officer. He began his career in the services after leaving the Officers Training School (OTS) program at Mangla and was appointed to the Frontier Force Regiment, which was integral to the 1971 war, the conflict in Siachen and the Kargil War.

In September 2018, he was promoted to the rank of two-star general and was later appointed as the new Director General of Inter-Services Intelligence (ISI). 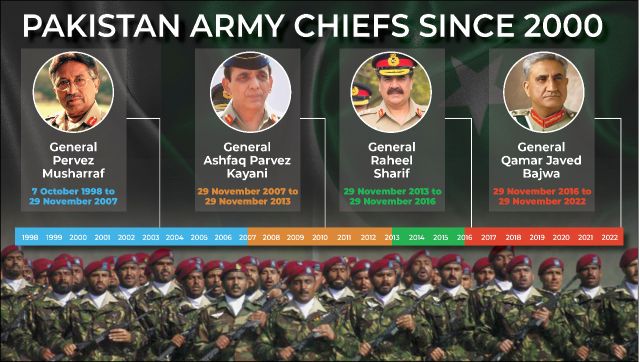 His stint with the Pakistani spy agency was short-lived, however, the shortest ever for Pakistan. He was replaced by Lieutenant General Faiz Hamid within eight months at the insistence of then Prime Minister Imran Khan.

However, it was during his tenure as ISI chief that the 2019 Pulwama attack took place, which saw tensions peak between India and Pakistan. He is also considered to have considerable expertise in handling India-related issues following his tenures as Director General of Military Operations from 2015 to 2018 and Chief of the General Staff from 2019 to 2021.

Also read: Pakistan will have a new army chief; it may not end the political uncertainty

It was reported that Munir, who is known for his anti-corruption approach, angered Khan as he reported to the Prime Minister that the family of Khan’s wife, Bushra Bibi, was involved in corrupt practices .

Lt. Gen. Munir was also the 2018 recipient of the Hilal-i-Imtiaz, which is Pakistan’s second highest civilian honor awarded to both civilians and military officers for “the highest degree of service to the state and for services to international diplomacy. ”

Lt. Gen. Munir’s rise to the position of leader of Pak’s army is in accordance with the principle of the oldest.

He will succeed current army chief General Qamar Javed Bajwa, who will complete his six-year term (which included a single three-year extension) on November 29.

Lieutenant General Munir is said to be close to Bajwa. As a brigadier, he was a commander in the Force Command Northern Areas (FCNA), at a time when Bajwa was commander of X Corps. The FCNA falls under the command of X Corps.

As head of the Pakistani army, Lieutenant General Munir will lead the six largest forces in the world.

Additionally, the military holds undue influence in Pakistan and has staged three coups since independence in 1947.

Even during periods of civilian rule, the head of the army has long been considered the true kingmaker and his appointment is charged with enormous political significance.

The army chief also faces multiple threats to internal security as well as the balance of power with rival India, against which Pakistan has fought three wars.

India is closely watching the appointment of the Pakistani army chief because of the influence it exerts on the country’s relations with other countries.

The new commander will have an impact on the most controversial issue of the two countries, Kashmir, according to a report by CNBC-TV18 Explain.

General Bajwa, as head of the Pakistani army, had authorized the reinstatement of the ceasefire agreement with India on the Line of Control issue in 2021. It remains to be seen whether Lt. -General Munir will abide by Bajwa’s dictate or will he move Pakistan to China or the United States which makes it more dangerous for India.

Red Sox sign Japanese star outfielder who is on base machine: report