Washington gas stations are rescheduling pumps to prepare for fuel at $10 a gallon as the average price climbs to $4.57 a gallon — nearly double the $2.41 in Trump’s last month in office

By Alex Oliveira for Dailymail.Com

A national chain of gas stations is reprogramming its pumps in Washington state to accommodate $10-a-gallon fuel as the nation’s average gasoline price climbs to $4.57 a gallon, nearly double from the average of $2.41 in Trump’s last month in office.

Other gas stations across the state have started to run out of gas as supplies become scarce, with reports that at least 10 stations have gone dry.

Meanwhile, some states — like California — are reporting a price spike of up to $5.98 this week.

Russia’s war in Ukraine is having a dramatic impact on the cost of crude oil – which sits at $114.20 a barrel.

U.S. gasoline prices hit a record high at $4.48 per gallon on national average on Monday 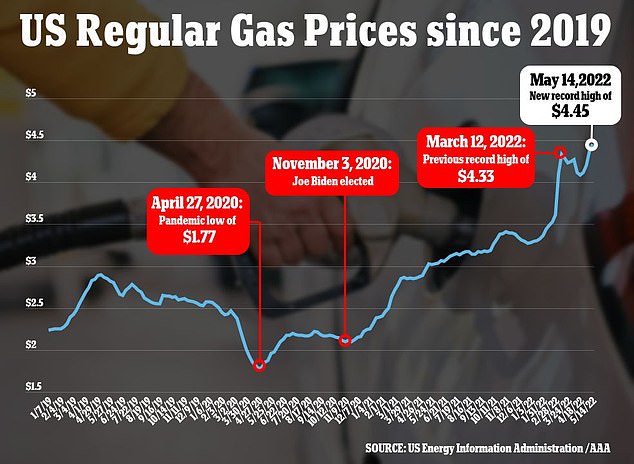 Gas prices have also risen. A spike in the price of crude oil is what led to the last period of stagflation in the United States in the 1970s

A spokesperson for ’76’ gas stations confirmed that the national chain had begun reconfiguring its pumps, telling Newsmax they were modifying their pumps to “make room” for the possibility of double-digit prices.

The war coupled with rising inflation of 8.3% are the main culprits behind why drivers are spending more than $100 to fill up with regular unleaded gasoline in almost a third of the country.

Gas prices are up 27% from the day before Russia’s brutal invasion of Ukraine earlier this year.

“Everything points to even higher prices. We’re on track toward $5,’ Andy Lipow, president of Lipow Oil Associates, told CNN, prices will almost certainly rise by Memorial Day, possibly to $4.75 a gallon.

AAA averages over $5 a gallon in California, Washington, Nevada and Hawaii, with Oregon not far behind.

A year ago, the average gas price was $3.04 per gallon. Prices were recovering from the pandemic when stay-at-home orders and business closures reduced demand for gasoline.

latest news Skelton: Suspending gas tax would have been great for Democrats