This is the incredible moment a Good Samaritan rescued a 98-year-old woman and her family who were trapped inside their home amid “devastating and deadly” flooding in Kentucky that left 28 people dead.

Missy Crovetti, of Green Oaks, Illinois, said her grandmother Mae Amburgey, her uncle Larry Amburgey and her brother Gregory Amburgey were in the Whitesburg, Kentucky home when it was completely flooded, with photos showing Mae , 98, sitting on her almost submerged bed.

While driving to get gas on Thursday morning, local man Randy Polly encountered floodwaters that left him stranded on a patch of dry land not far from Mae’s house.

He captured the moment he saw a “hero” save Mae and her family from the rising waters. Filming from a short distance around 9 a.m., the man swam home and began knocking on the door and window before entering the house and helping to get members of the property family.

“Devastating and deadly” flooding in Kentucky has so far claimed 28 lives. Pictured are Kentucky National Guard soldiers and airmen in a boat driving through a severely flooded area 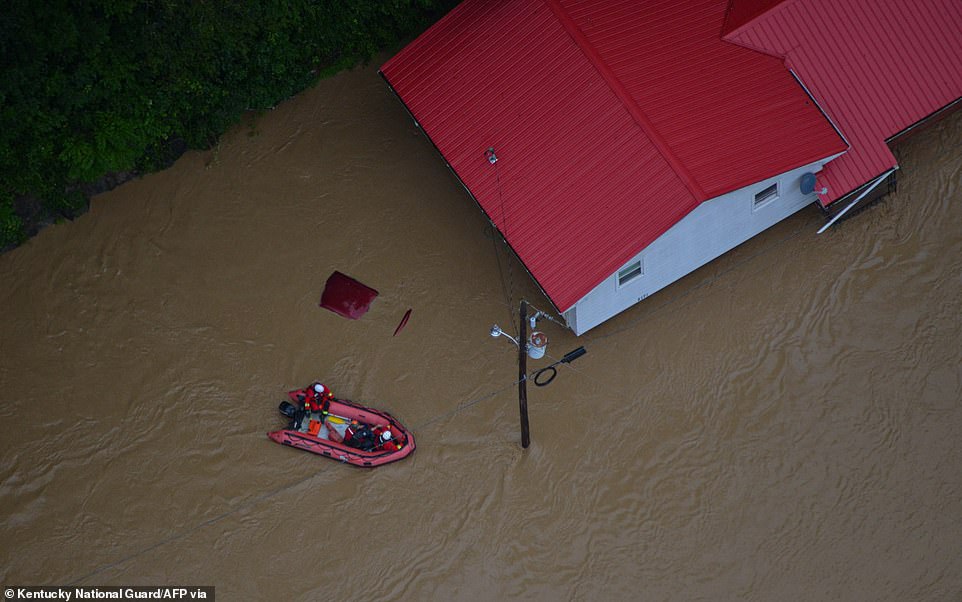 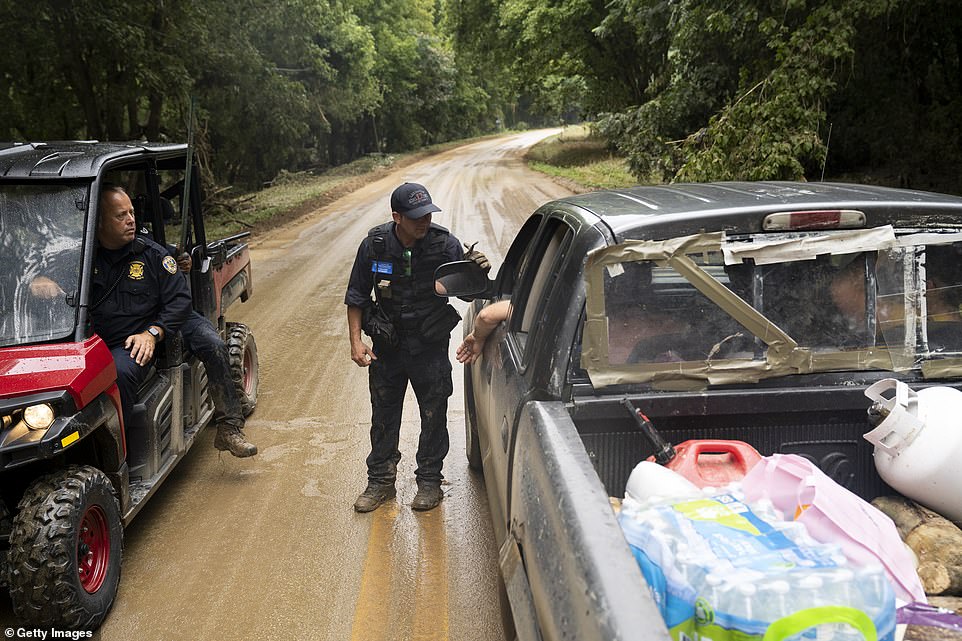 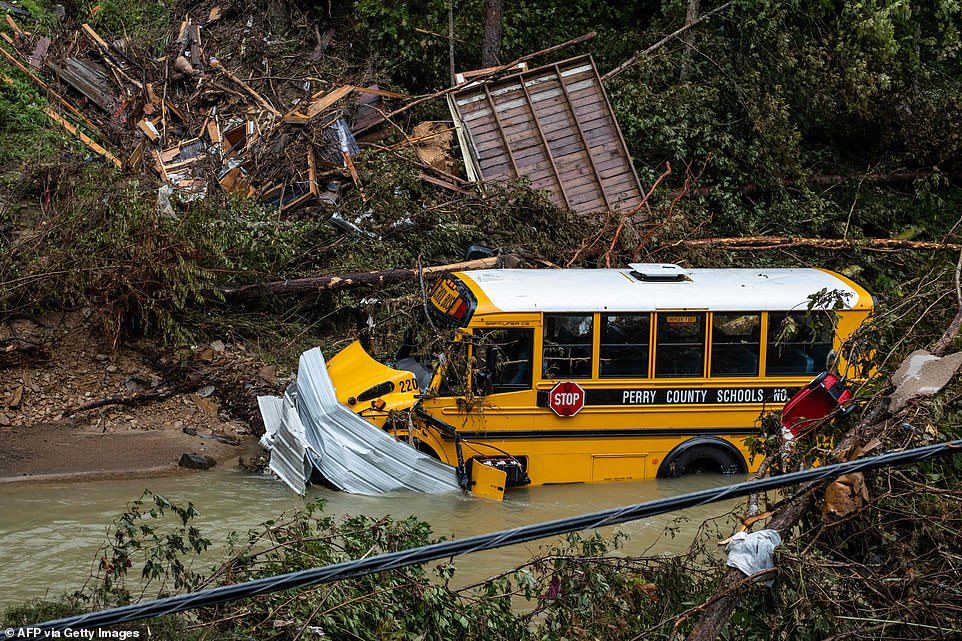 A Perry County school bus and other debris are seen in a creek near Jackson, Ky., on Sunday. The death toll is now 28, with more expected in the coming days

The rescue of the unnamed man took about 30 minutes – and all three loved ones are believed to be safe and doing well, Missy Crovetti told CNN.

Mr Polly told the outlet that as he watched this scene unfold, he could hear people shouting, “Help me, get help”, and that 911 calls were worthless because the emergency services were “overwhelmed” and “not responding to his calls”. .

Kentucky Gov. Andy Beshear predicted bodies will continue to be found ‘for weeks’ as the death toll from devastating flooding rose to 28 on Sunday as rescuers continue a long and grueling effort to locate the victims.

Parts of the mountainous region are still inaccessible following flooding in the east of the state that turned roads into rivers, washed away bridges and swept away homes. Intermittent rain and poor cell phone service also complicate rescue efforts.

Kentucky rescuers conduct door-to-door searches in deteriorating weather as they prepare for a long and grueling effort to locate victims of flooding that devastated the eastern part of the state.

“This is one of the most devastating and deadly floods we’ve seen in our history…And just as we’re trying to dig in, it’s raining,” Gov. Andy Beshear told NBC’s Meet the Press.

“We are going to work to go door to door, work to find, again, as many people as possible. We will even work in the rain. But the weather complicates things. 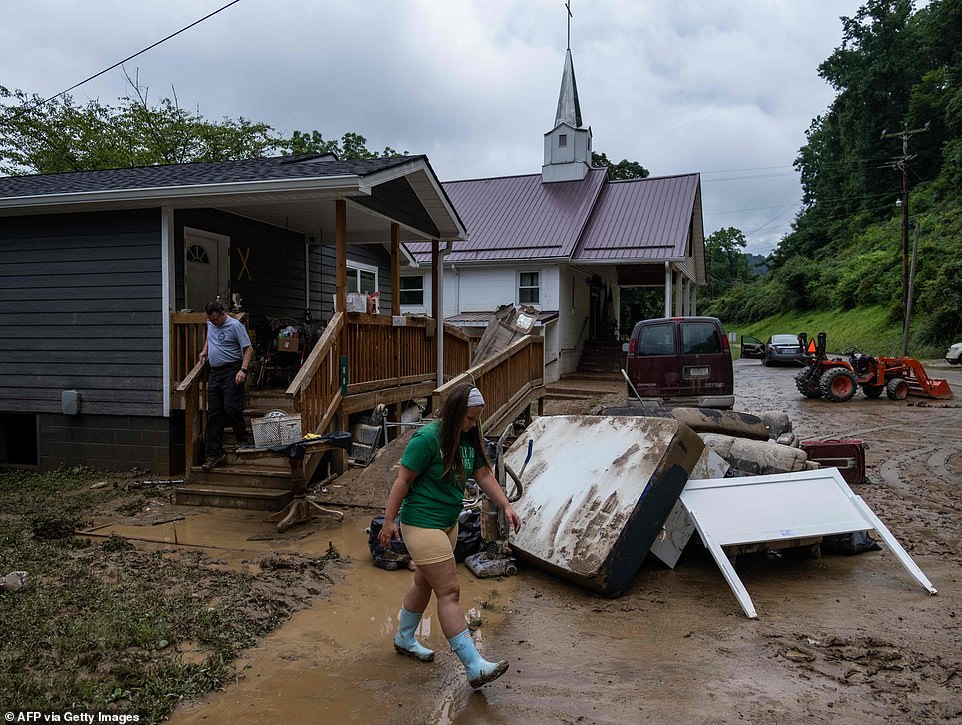 Parts of the mountainous region are still inaccessible following flooding in the east of the state that turned roads into rivers, washed away bridges and swept away homes. Intermittent rain and poor cell phone service also complicate rescue efforts 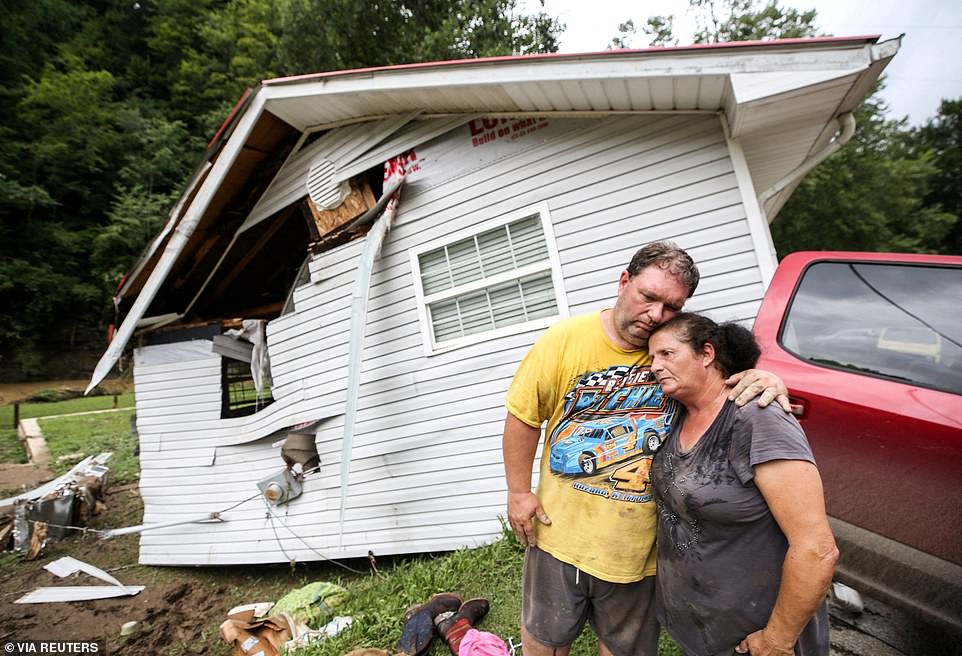 Reggie Ritchie comforts his wife Della as they pause to clean up their prefab home destroyed by Troublesome Creek flooding behind them in Fisty, Kentucky 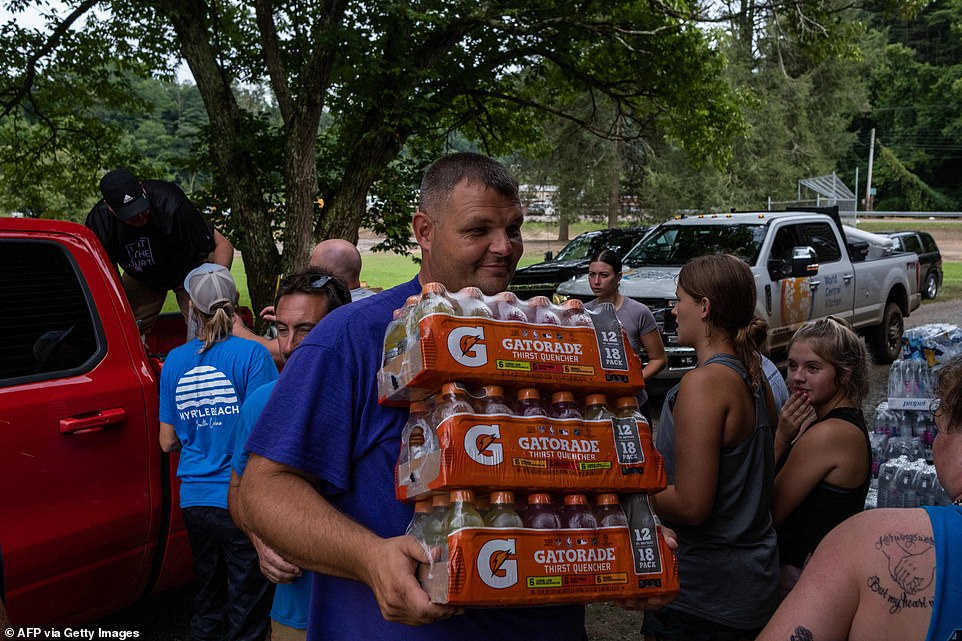 Local volunteers unload donated goods for the community of Buckhorn, Ky., after devastating flooding left many without homes or belongings 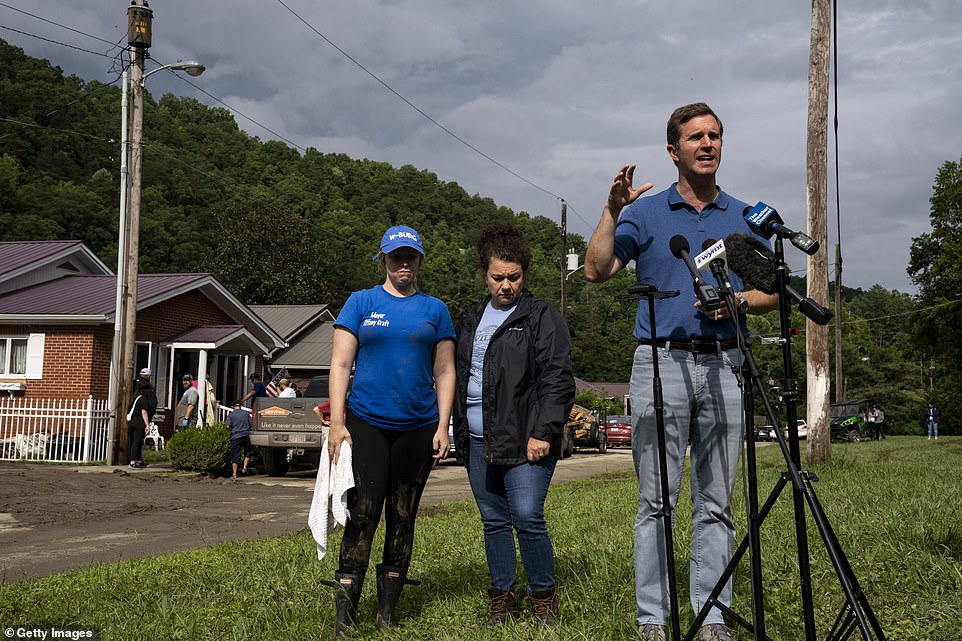 “This is one of the most devastating and deadly floods we’ve seen in our history…And just as we’re trying to dig in, it’s raining,” Gov. Andy Beshear told NBC’s Meet the Press.

The death toll in the floods, caused by torrential rains that began on Wednesday, is expected to rise further.

“We’re going to be finding bodies for weeks, many of them sweeping hundreds of yards, maybe over a quarter of a mile from where they were lost,” Beshear added.

The governor toured the flooded areas and made stops in three counties on Sunday. In sodden parts of the state, more than 350 people are temporarily living in shelters, he said.

Receding floodwaters had left a thick layer of dust on the streets as dark clouds hinted at more rain to come.

Some 35 miles (55 kilometers) south of the small community of Buckhorn, volunteers at a distribution center numbered between 700 and 800 people who came on Sunday alone to collect supplies ranging from food to paper towels and household items. toilet. 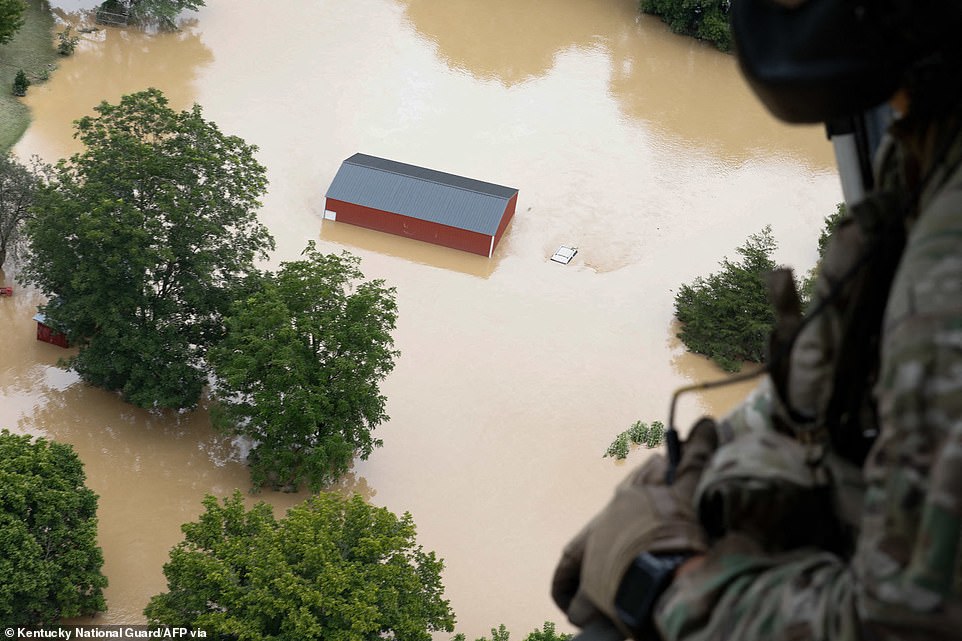 Kentucky rescuers conduct door-to-door searches in deteriorating weather as they prepare for a long and grueling effort to locate victims of flooding that devastated the eastern part of the state. 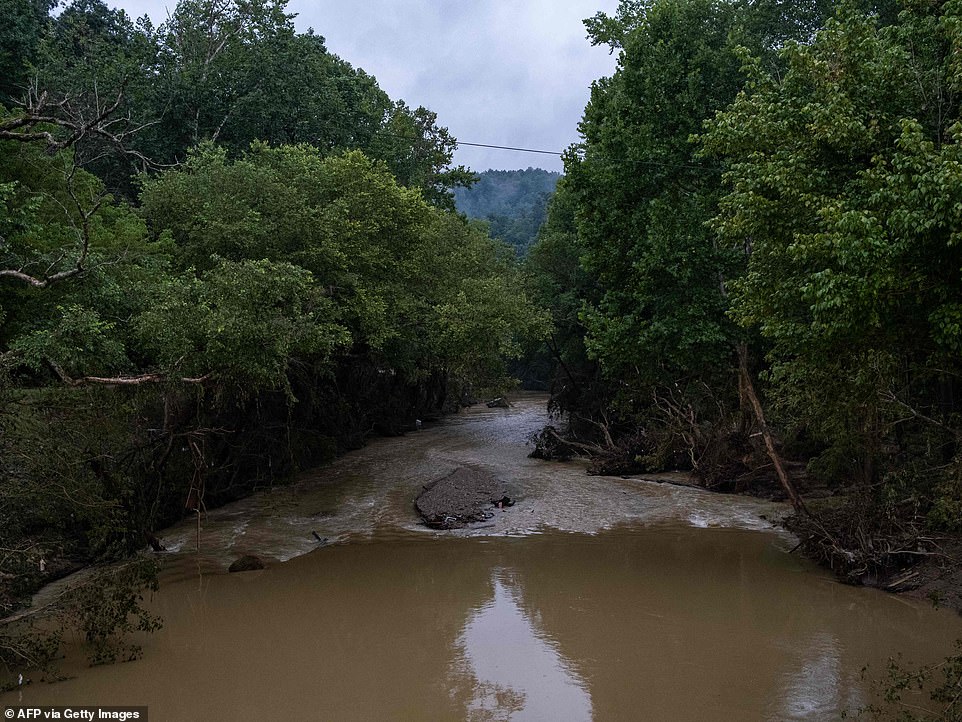 The North Fork Kentucky River, which flooded due to heavy rain in parts of eastern Kentucky, in Jackson County, Kentucky 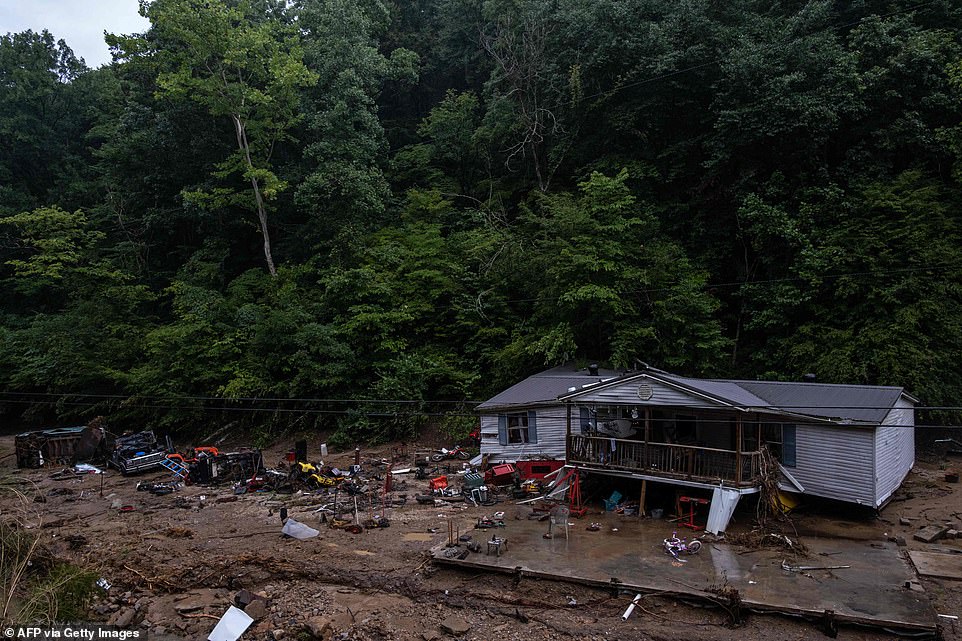 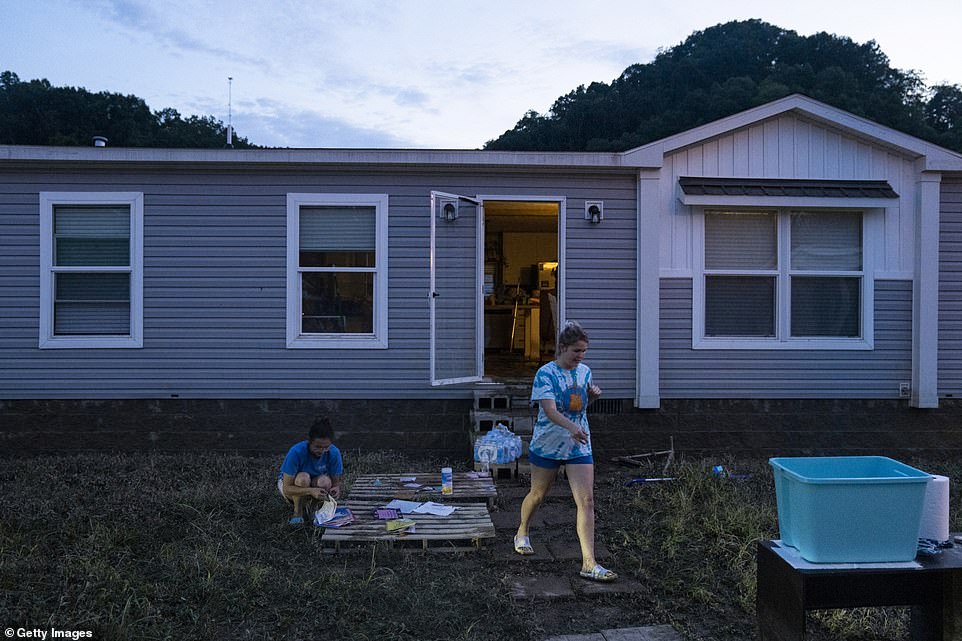 Corissa Creek (left) and Haley Gayheart help clean the home of a friend who is eight months pregnant and unable to clean in Jackson, Kentucky

The floods hit an area of ​​Kentucky that already suffered from crushing poverty, driven by the decline of the coal industry that was central to its economy, taking everything from the people who could least afford it.

“It wiped out areas where people didn’t have much to start with,” Beshear added.

Parts of eastern Kentucky reported receiving more than 8 inches of rain in 24 hours.

The water level at the North Fork of the Kentucky River at Whitesburg rose to a staggering 20 feet (6.09 m) within hours, well above its previous record high of 14.7 feet (4.4 m).

The National Weather Service’s Weather Prediction Center said: “The threat of flash flooding will continue through the afternoon and early evening from downpours and thunderstorms with very heavy precipitation rates. “

The eastern Kentucky flood is the latest in a series of extreme weather events that scientists say are a sure sign of climate change.

Nearly 60 people were killed in western Kentucky by a tornado in December 2021 — a disaster that Beshear said offered lessons for current efforts across the state.

“We learned a lot of lessons in Western Kentucky about these devastating tornadoes about seven months ago, so we’re providing as much support as we can and moving quickly from across the state to help,” he said. he told CNN on Saturday.