Oleksandr Usyk has acquired a mystique as boxing’s unbeatable ogre – and even the man named as his last conqueror refuses to take credit for a freakish result.

The Ukrainian is hunting for heavyweight titles, having conquered all at cruiserweight, and Derek Chisora becomes the latest opponent to seek out a sign of vulnerability from Usyk in Saturday’s fight, live on Sky Sports Box Office.

But Usyk has been beaten before, 16 times by amateur rivals, and his most recent listed defeat would have instilled fresh hope in challengers such as Chisora.

Nine years ago at the Nikolay Manger Memorial Tournament in the Ukraine, The International Boxing Association [AIBA] record shows that Usyk reached the final, only to suffer a shock knockout defeat to Siarhei Karneyeu in the first round.

No footage could be found of Karneyeu’s victory in the competition, and the only televised evidence of his fights with Usyk are two points defeats at the European and World Championships.

The Belarusian has not turned professional, opting instead for a coaching career, and initial messages to his social media account were met with brief replies about his fights with Usyk.

Yes, he had fought Usyk, but Karneyeu would only give a bizarre explanation for his victory in May 2011.

Either false translation or false modesty was masking the cold, hard stat of Usyk’s defeat, and Karneyeu would agree to an interview at his gym in Minsk, an opportunity to explain the finest victory on his record which he had been so quick to deny.

But just minutes into the interview, Karneyeu would offer the same outlandish reason for his triumph.

“How many times did you manage to beat Usyk?” the interviewer asked.

“One time,” he replied. “I managed to beat Usyk only once. But it was a different Oleksandr Usyk – the champion’s namesake.”

“When you beat Usyk, what did you feel?” the confused interviewer continued.

“I felt the usual thing,” said Karneyeu. “I became the winner, but it was a different Oleksandr. That’s it.”

A squad of Team GB fighters had also headed to the same tournament with Europe’s top talent, which included Ukraine’s other star performer, Vasiliy Lomachenko, who has remained Usyk’s closest friend in the sport.

Sunderland’s Warren Baister had joined Karneyeu in the same weight class, but it was the revered Usyk, who had been studied closely by the travelling party of Brits.

Oleksandr @Usykaa is one of a kind 🥊

“It was a high-quality tournament, there were some big names in it,” said Baister.

“Put it this way, on the GB squad, he [Usyk] was one of the people that all of the lads would watch on YouTube. Him and Lomachenko.

Baister had enquired about his most respected rival after progressing from his preliminary bout.

“Once I boxed, Usyk was the fight after me, but I was out the back getting sorted and I was away,” he said.

“I never seen him, and I was asking the lads, ‘Has anyone seen Usyk?’, because obviously we were fully aware of him then.”

Karneyeu would end Baister’s involvement in the quarter-finals with a points decision after a ‘tear-up’.

But what about the elusive Usyk?

“There were so many fights on, [but] there was no sign of him,” said Baister. “It was quite strange. Lomachenko was there.

“Obviously I was on the other side of the draw to Usyk, but there was speculation that it was another Oleksandr Usyk. It wasn’t actually him.”

Karneyeu had been twice denied gold medals by defeats to Usyk, settling for silver and bronze at the European and World Amateur Championships, but was it completely inconceivable that he gained revenge with a brutally swift victory?

“I can’t see anyone stopping Usyk, unless it would have been through injury or something like that,” said Baister. “At the time, he was on fire, he was dealing with everyone really.

“I’ll be honest, I never saw Usyk once, so I think it’s probably true, it was just a massive coincidence on the name front.

“I just can’t see it being the Oleksandr Usyk, because I don’t think Siarhei Karneyeu would have done that to him. No way.”

A fellow Ukrainian with the same famous surname, Artem Usyk, fought in the same weight division and competed regularly in the same city of Kherson that staged the event, but there is no evidence that he instead faced Karneyeu.

Oleksandr Usyk has never publicly spoken of this freakish result, although Karneyeu revealed how the Olympic gold medallist had messaged him privately. 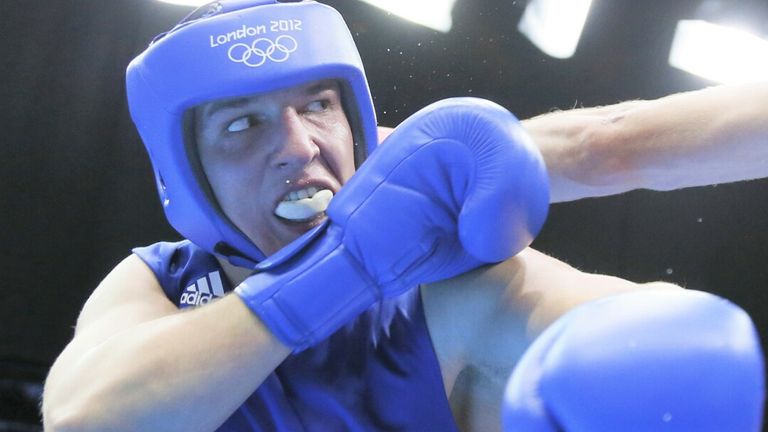 I beat the wrong Oleksandr.

“Yes, he wrote to me saying that people were writing and ringing him, expressing their regret that he had lost to me,” said Karneyeu. “And that wasn’t him actually, but his namesake who lost the fight.

“I beat the wrong Oleksandr.

“I just don’t want any confusion. I don’t want it all to be twisted and people to think that I beat Sasha [short for Oleksandr].”

Usyk has readily embraced his reputation as a mystifying force in the ring, recently declaring: “I am water, wind and fire all together.”

Even if boxing stats still show it, Karneyeu fiercely disputes that he ever delivered a fight-ending blow on the real Oleksandr Usyk.

But Chisora will try to achieve this feat at the weekend, and if he does land a hammer-fisted hook, then Karneyeu will gladly be forgotten as the last man to knock out Usyk.

Watch Usyk vs Chisora on Saturday, live on Sky Sports Box Office, from 6pm. Book it via your Sky remote or book it online here. Even if you aren’t a Sky TV subscriber you can book and watch it here.

Paul Gascoigne on I’m a Celebrity Italy: Full details & how to watch