A 26-year-old Chinese graduate student at the University of Utah with a history of violent behavior has been arrested for allegedly killing his 19-year-old girlfriend by injecting her with a lethal dose of heroin as part of a ” botched suicide pact. ‘, according to Salt Lake City police.

Haoyu Wang emailed a school staff member explaining that he and his girlfriend, Zhifan Dong, ordered heroin and fentanyl from the ‘dark web’ and planned to kill themselves by taking a drug overdose, reads an affidavit of arrest obtained by the Washington Post.

Wang reportedly told the staff member that he had previously injected Dong with a lethal amount of heroin to “relieve his suffering”.

Police said in a news release that they contacted Dong’s cell phone and tracked the couple to a Quality Inn about a 10-minute drive west of the Salt Lake City campus.

Officers and university authorities conducted a wellness check at a room Wang had rented, where paramedics found Dong’s lifeless body, police said. Meanwhile, Wang was alive and did not need medical treatment.

Haoyu Wang, 26, a Chinese graduate student at the University of Utah, allegedly injected his girlfriend Zhifan Dong, 19, with a lethal dose of heroin at a Quality Inn in Salt Lake City on Friday 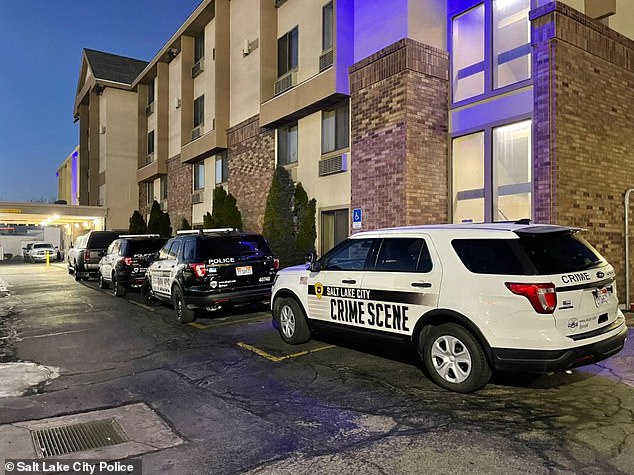 Wang told police the couple had made a “suicide pact” and planned to overdose on drugs together. Police found the two at an off-campus motel, where Dong was pronounced dead and Wang was arrested.

He was arrested at the scene and charged with “knowingly and intentionally” murder. Because the two were a couple, the case is being investigated as a “domestic violence-related homicide,” police noted.

Wang told officers that he and Dong, who was a college undergraduate, snorted heroin at the motel with the intention of dying together, the affidavit states.

Dong started vomiting, stopped reacting, and started breathing heavily. In response, the affidavit continues, Wang injected her with a lethal dose of drugs to “relieve her suffering” and watched her die.

He then injected heroin and stayed in the room until police showed up at the motel, he said. It is unclear how much heroin Wang would have taken or if it was the same dose he gave his girlfriend.

Wang, who is a Chinese citizen, does not have a lawyer listed in public court records. Police said Wang was living with Dong, identified by the university as an international undergraduate student from Anyang, in China’s Henan province.

Wang has committed an act of violence against his girlfriend at least once before, state court records show. Last month he was charged with assault for hitting Dong during an argument at another hotel and leaving her with a paramedics welt described as a ‘goose egg’, an affidavit read. of probable cause seen by the Washington Post. 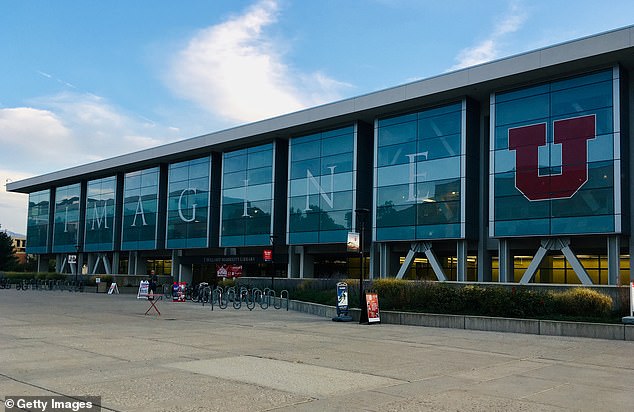 Wang was charged with “knowing and intentional” murder. Because the two were a couple, the case is being investigated as a “domestic violence-related homicide,” police noted. Both Wang and Dong were international students at the University of Utah 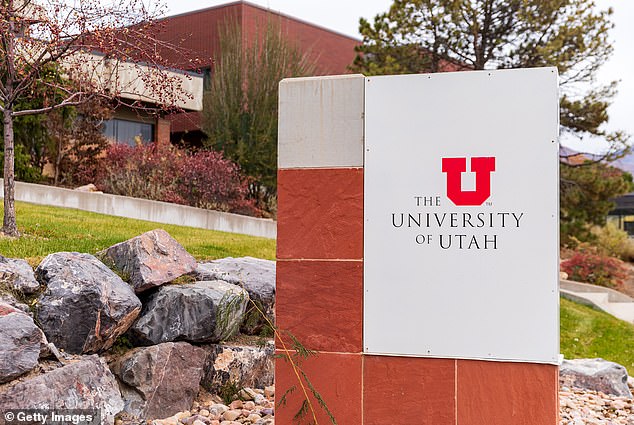 Wang was charged last month with assault for allegedly hitting Dong during an argument and leaving her with a welt that paramedics described as a “goose egg”. 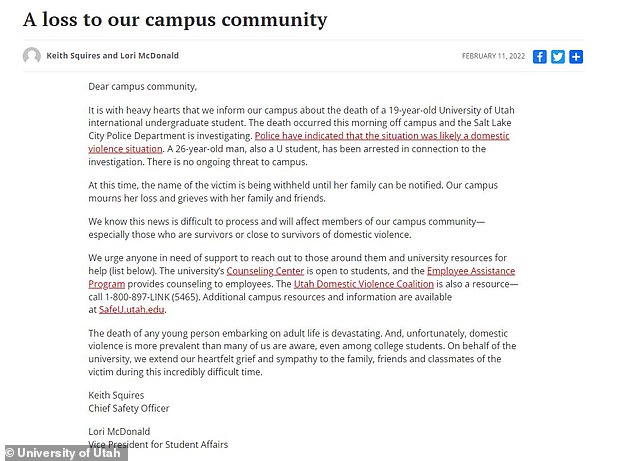 Wang was released from prison and deemed “at low risk of committing a violent crime,” with his next court appearance scheduled for Wednesday, according to state court records.

University of Utah officials alerted students to the alleged murder on Friday, issuing a statement that it involved an “international undergraduate student” but there was “no continuing threat to the campus. “.

“We know this news is difficult to process and will affect members of our campus community, especially those who are survivors or relatives of survivors of domestic violence,” the statement read before offering resources for students. , including the School Counseling Center and Utah Domestic Violence. Coalition at 1-800-897-LINK (5465). Additional campus resources and information are available at SafeU.utah.edu, the university said.

“The death of any young person entering adulthood is devastating. And, sadly, domestic violence is more prevalent than many of us know, even among college students. On behalf of the university, we express our sincere grief and sympathy to the family, friends and classmates of the victim during this incredibly difficult time,’ the statement concluded.

After Dong’s identity was revealed, university president Taylor Randall sent a statement to students to “express my deepest sympathy to Zhifan’s family, friends and loved ones.”

“Along with many other students from his native country, Zhifan participated in one of U’s global programs, known as Utah Global, which helps immerse international freshmen in academic life and culture of the university. We extend our support during this difficult time to all of our international students, especially his peers in the Utah Global program,” he wrote.

Randall noted that the investigation is ongoing and thanked the Salt Lake City Police Department and University Police “for their hard work and professionalism in this matter.”

Dong’s death marks the seventh reported killing of a university student or staff member since 2016, four of which were incidents related to domestic violence. 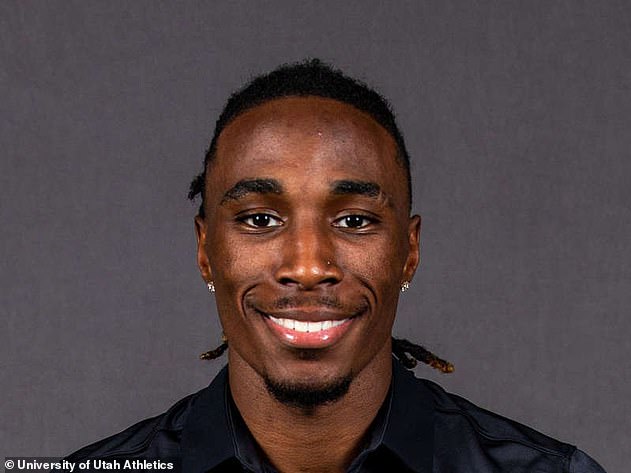 Dong’s death marks the seventh reported killing of a university student or staff member since 2016. Aaron Lowe (above), 21, also a student at the University of Utah, said was shot at a party in Salt Lake City in September. 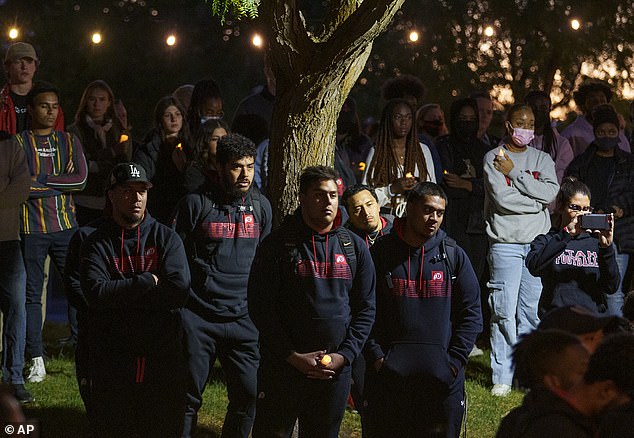 Sudanese citizen Buk Mawut Buk has been arrested in connection with his death. Above, Lowe’s teammates attended a candlelight vigil for him on campus

Most recently, second-year U of U football player Aaron Lowe, 21, was shot dead at a party in Sugarland in September 2021. Police arrested Sudanese citizen Buk Mawut Buk, 22, and charged him with murder in connection with the shooting, which cops say was sparked by uninvited guests who were asked to leave the party.

Lowe’s death came less than a year after teammate Ty Jordan, 19, died of a self-inflicted accidental gunshot wound in December 2020.

Nearly two years prior, MacKenzie Lueck, a 23-year-old college kinesiology student, was murdered by a man she met on a dating app in June 2019, the Salt Lake Tribune reported.

Resident doctor Sarah Hawley was shot dead by her boyfriend at their home in January 2019.

Student-athlete Lauren McCluskey was shot outside the university dorms in October 2018 by a man she dated for a short time.

ChenWei Guo, 23, a computer science student also from China, was killed in a carjacking in October 2017. Austin Boutain, 24, has since pleaded guilty to shooting Guo’s car five times and having killed her. Boutain agreed to be sentenced to life in prison.

Finally, staff member Katherine Peralta was killed in a campus parking lot by her husband in December 2016 after telling him she planned to file for divorce, according to the outlet.