Avid labor advocate President Biden is facing heat from some labor groups after he ordered Congress to pass legislation to impose the terms of a tentative agreement on workers who oppose it.

“Joe Biden has ruined everything,” Railroad Workers United said in a press release on Tuesday, before accusing the president of being a “pawn” for big business.

Biden in September celebrated a tentative deal between railroad workers and railroads that his White House helped broker. Now, with just over a week to go before a deadline that will trigger a devastating railway strike, four of the 12 main railway unions have rejected the deal.

If even one of the unions goes on strike, the other 11 respect the picket lines, shutting down the railroads.

“We’re going to work together to fund, I hope, we’re going to fund the government, Covid and the war in Ukraine – all controversial and consequential issues,” Biden said.

“He had the opportunity to prove his pro-worker pedigree to millions of workers simply by asking Congress for legislation to end the threat of a national strike on more pro-worker terms. Unfortunately, he couldn’t bring himself to plead for a handful of lousy sick days. Democrats and Republicans are both pawns of big business and corporations.

“It’s not enough to ‘share workers’ concerns,'” the Brotherhood of Maintenance Way Employees, one of the groups that rejected the deal, said of ‘union guy’ Joe Biden’s appeal. “.

“A call for Congress to act immediately to pass legislation that adopts tentative agreements excluding paid sick leave ignores the concerns of railroad workers. It both denies railway workers their right to strike while depriving them of the benefit they would otherwise likely get if they were not denied their right to strike.

Unions say the railways, many of which reported record profits last year, are reporting even higher profits again this year and can afford to meet their demands.

“I share workers’ concern about the inability to take time off to recover from illness or care for a sick family member,” Biden said in a statement. “No one should have to choose between their job and their health – or the health of their children.” 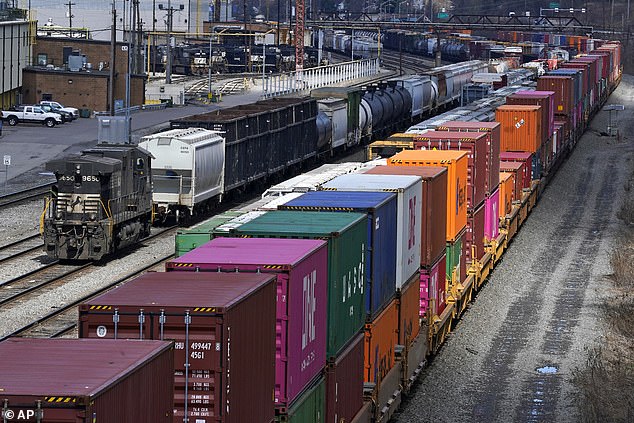 If even one of the unions goes on strike, the other 11 respect the picket lines, shutting down the railroads

But he said the risk was too great to bear if railway workers went on strike.

Democrats largely rallied behind the president’s call for congressional action, with House Speaker Nancy Pelosi agreeing to introduce a railroad strike bill Wednesday morning and the majority leader in the Senate, Chuck Schumer, stating that his chamber would consider it as soon as possible after that.

Biden and congressional leaders agreed that changing the tentative agreement would cause a delay and decide to set aside the issue of sick leave.

“I would like to see management come to the table and treat their employees with respect,” Sanders said, according to The Washington Post. “If they don’t, Congress must act to ensure that there is guaranteed sick leave for these workers.”

He said the Biden-backed tentative deal doesn’t go far enough “by any means” and said it was “outrageous” to take a bill to force a deal without more sick leave.

Republican Rep. Rick Crawford from Arkansas, a senior member of the House Subcommittee on Railroads, Pipelines and Hazardous Materials, said he would support the legislation, but noted that Biden had asserted that the agreement in principle had “solved” the problem of the strike in September.

“President Biden is now calling on Congress to resolve the threat of a railroad union strike that he and his team said they had resolved,” Crawford told DailyMail.com.

“As it becomes increasingly clear that several unions have no intention of supporting the tentative agreement, it is vital that we pass legislation to prevent a strike.”

Eight out of 12 railroad unions have accepted a tentative deal brokered by the White House between union leaders and railroad operators that includes a 24% wage increase. Four other major unions have not accepted the deal, arguing that it does not provide enough sick leave for their workers.

Biden has now called on Congress to act to force the deal on workers who have not accepted it by the Dec. 9 deadline, after which they will strike if there is no deal.

What’s in the deal:

Wage increases – workers will be offered a 24% wage increase over the five-year period from 2020 to 2024, back wages and cash bonuses, with 14% of the increase taking effect immediately

No health care hike – the deal prevents health care co-payments and deductibles from being raised, a big win for workers.

More time off – workers would be granted voluntary days off and one additional paid day off per year.

What is not in agreement:

15 days sick leave – workers who oppose the deal say this is their sticking point. The tentative deal only offers one extra day of sick leave.

What happens if no agreement is reached by December 9?

As Biden noted, a railroad strike would “devastate our economy” and could put up to 765,000 people out of work. The president noted that it could even affect the supply of drinking water and livestock and agriculture. Businesses across the country could be forced to close without access to the supplies they need, and the US economy could lose $2 billion a day.

If even one of the unions goes on strike, the other 11 respect the picket lines, shutting down the railroads.

Some Republicans disagree with forcing the deal on workers — Florida Sen. Marco Rubio vowed to vote against such a deal in a statement.

“Just because Congress has the power to impose a heavy-handed solution doesn’t mean we should. It is a mistake on the part of the Biden administration, which has failed to fight for workers, to ask Congress to impose a deal that workers themselves have rejected,” Rubio said in a statement. a statement. “I will not vote for any agreement that does not have the support of the railway workers.”

He added: “On the one hand, Wall Street’s quest for efficiency has turned railroad workers into little more than line items on a spreadsheet. On the other hand, you have union leaders so out of touch with their ranks that they made a deal that their members cannot support.

Others said they would back the bill to force the deal — a group of GOP senators introduced a resolution to force the tentative deal just after it was announced in September, but Democrats stopped it to give railway workers and railways time to negotiate.

As Biden noted, a railroad strike would “devastate our economy” and could put up to 765,000 people out of work. The President noted that it could even affect drinking water and agricultural supplies if they were unable to access the right chemicals and fertilizers and livestock if they were unable to access to animal feed. Businesses across the country could be forced to close without access to the supplies they need, and the US economy could lose $2 billion a day.

Commuter railroads and Amtrak would also be affected as they often use tracks owned by freight railroads.

September’s tentative deal offered a 24% pay rise over five years for railway workers, health care benefits the cost of which would not increase and sick leave. Fourteen percent of the increase would be effective immediately.

The National Carriers Conference Committee, the group negotiating on behalf of freight railroads, said that at the end of five years, railroad workers would earn an average of $110,000.

Not all news on the site expresses the point of view of the site, but we transmit this news automatically and translate it through programmatic technology on the site and not from a human editor.
Rana AdamNovember 30, 2022