Two former NFL stars have said they’re willing to donate their brains to science to help research into a degenerative disease associated with repeated beatings to the head.

Former Denver Broncos quarterback Jeb Putzier, 43, and Jake Plummer, 47, both felt that repeated concussions during their careers could shorten their lives.

A 2017 Boston University study found that 99% of former NFL players who donated their brains to science were diagnosed with chronic traumatic encephalopathy (CTE) after their death.

CTE, formerly known as “drunkenness disorder”, is a brain disease suspected to be caused by repeated blows to the head.

Quarterback Jake Plummer is pictured for his NFL headshot in 2008, shortly before his retirement 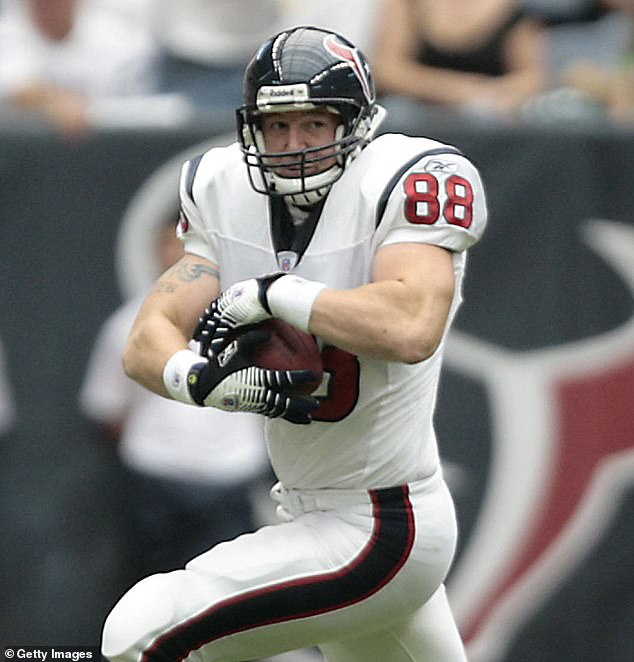 Symptoms include memory loss, slurred speech and some of the same symptoms as Parkinson’s disease.

Chronic Traumatic Encephalopathy (CTE) is a degenerative brain disease thought to be caused by repeated blows to the head.

It was previously known as “drunken punch” syndrome and associated with boxers and NFL athletes.

Symptoms include memory loss, slurred speech and even symptoms of Parkinson’s disease.

It doesn’t always show up on brain scans, according to Britain’s NHS.

Researchers therefore depend on the willingness of ex-athletes to voluntarily donate their organs after death to determine how CTE may be caused – and treated.

But it doesn’t always show up on brain scans, making volunteers like Putzier and Plummer essential to scientific research into the disease.

Putzier told Fox he suffered about 1,000 concussions during a ten-year NFL career.

He said: “I have problems with my eyes. It’s hard for me. I don’t read left to right like that anymore. I was a student of English literature and I can no longer read.

Plummer added that he now wonders if he should have played football.

He said: “When I came out of the league and had hip surgeries, Junior Seau killed himself and I went to see the movie ‘Concussion’. Yeah, I was starting to wonder why I even played the game.

Plummer retired in 2008 after a decade-long career in the NFL.

Putzier hung up his helmet in 2010 after eight years in the NFL.

An autopsy earlier this year confirmed ex-Bronco Demaryius Thomas had CTE when he collapsed and died aged just 33.

Thomas was going 70mph when he flipped his car in 2019 and eventually cracked the windshield with his head.

The Jaws of Life were needed to extract Thomas from the vehicle, according to The New York Times.

“He had two different conditions in parallel,” Dr. Ann McKee of Boston University told the newspaper, explaining that the seizures are not usually related to CTE.

Thomas suffered from “memory loss, paranoia and isolation” in the last years of his life, all of which are indicators of CTE. 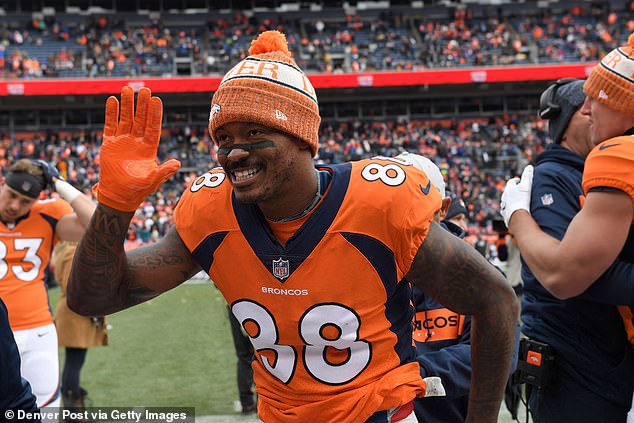 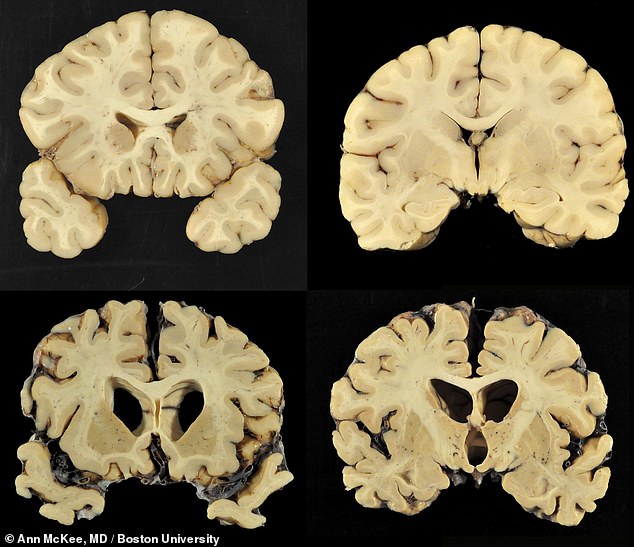 CTE is apparent in slices of a normal brain (top row) compared to former University of Texas football player Greg Ploetz (bottom), who died in 2015 with severe frontal lobe damage 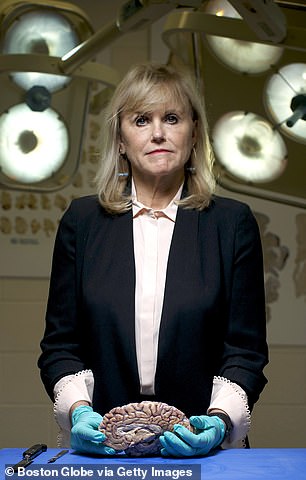 Dr. Ann McKee, a professor at Boston University School of Medicine, diagnosed Demaryius Thomas with CTE after his death

Thomas was one of more than 300 former NFL players diagnosed with the brain disease by Boston University’s CTE Center.

Meanwhile, the NCAA has been found not responsible for the death of a former USC football player diagnosed with permanent brain damage.

Matthew Gee, a linebacker on USC’s 1990 Rose Bowl-winning team, suffered about 6,000 hits as a varsity athlete, his widow’s attorneys said.

They alleged that those impacts caused permanent brain damage and led to cocaine and alcohol abuse that eventually killed him at age 49.

The NCAA, the governing body for US college sports, said it had nothing to do with Gee’s death, which it said was sudden cardiac arrest brought on by untreated hypertension and acute toxicity from cocaine.

Hundreds of wrongful death and personal injury lawsuits have been filed by college footballers against the NCAA over the past decade, but Gee’s was the first to reach a jury.

The suit alleged blows to the head led to CTE, a connection that did not convince the jury in the $55 million decision.

Judge Terry Green told jurors in Los Angeles Superior Court that they had “made history” in the first case of its kind.

“Any attorney for the plaintiff is going to think twice before putting all the chips on the table and pushing them in the middle and saying, ‘We’re going to take our case to court and see what happens,'” Lust said.