Donald Trump‘s supporters staged a series of demonstrations across the country on Saturday, with hundreds of people congregating in Portland, Los Angeles, Texas, Ohio, Georgia and beyond to celebrate their president and rally for his re-election.

In Portland – among the most turbulent of cities in the wake of the May 25 shooting of George Floyd – more than 600 cars flying Trump flags and banners set off in a convoy around and through the city, after tense scenes at their meeting point and clashes with counter-protesters.

The Morrison Bridge was the scene of an ugly conflict as the caravan pulled into the city, and one Trump supporter drove his truck towards protesters on an off ramp. Two people brawled on the bridge, sparking a rapid response from Portland police who arrested the pair.

As night fell the caravan was cruising around town, with what organizers hoped was a show of strength to rival the Left-wing activists who have largely dominated the previous 94 nights of protest.

Supporters of Donald Trump met in Clackamas town center on Saturday at 4pm, to drive around Portland 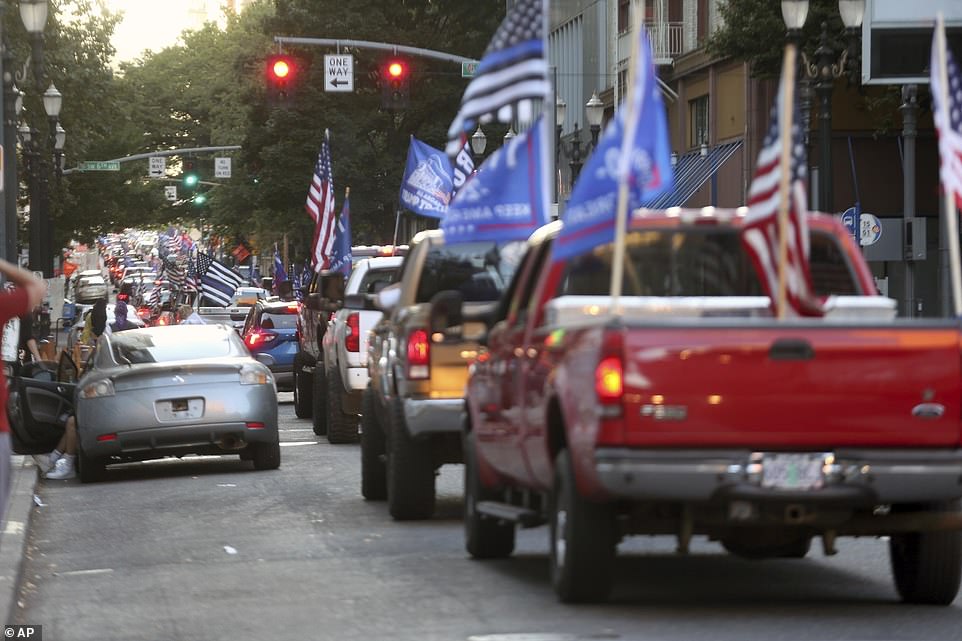 The Portland, Oregon caravan was organized on Facebook, with 2,500 people intending to attend. Around 1,000 showed up 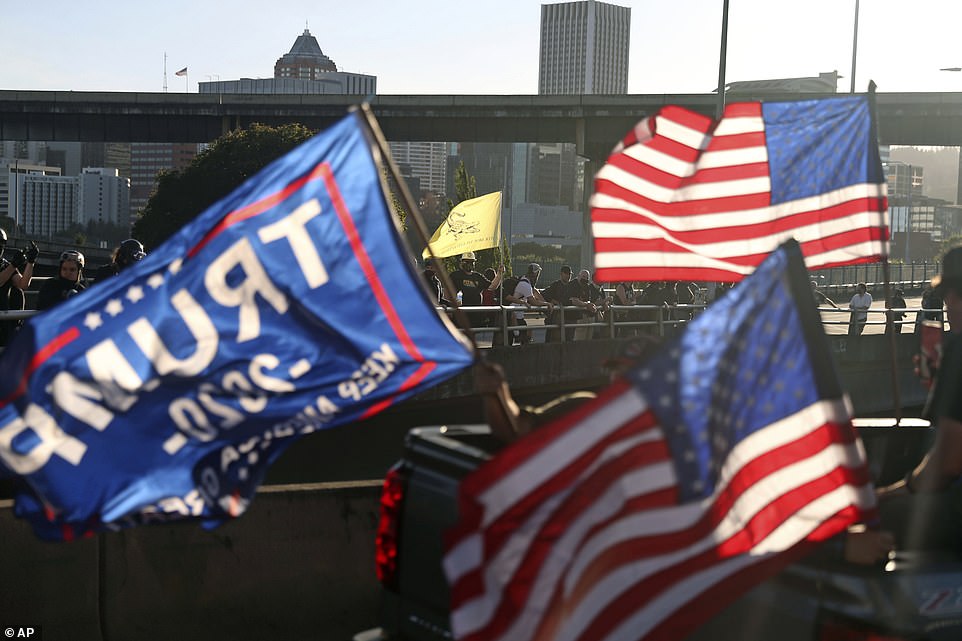 Saturday’s rally was intended to follow a route circling around Portland and avoiding the downtown area, but cars diverted

Seventy-four people are now facing federal charges related to protests that have rocked the city for three months since Floyd was killed, the local U.S. attorney announced Thursday.

The misdemeanor and felony charges include assaults on federal officers, arson and damaging federal property.

On Friday night protesters took to the condo lobby of Portland’s mayor, staging a sit-in and demanding police budget reductions and Mayor Ted Wheeler´s resignation. They left after a few hours.

Saturday’s pro-Trump demonstration was organized on Facebook, and 2,500 people said they intended to attend.

A New York Times reporter on the scene estimated that around 1,000 people showed up at Clackamas Town Center at 4pm.

‘We would like to get some fellow American patriots together for a Trump 2020 Cruise rally to support our great president,’ wrote Alex Kyzik, one of the organizers.

Attendees were encouraged to bring their guns, and conceal them.

Some of those at the start, however, were openly flaunting their assault rifles. 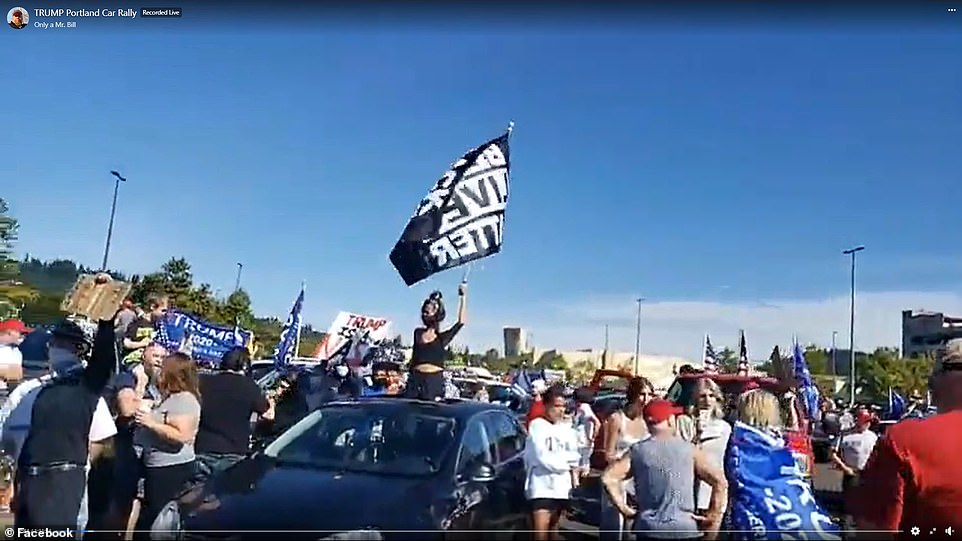 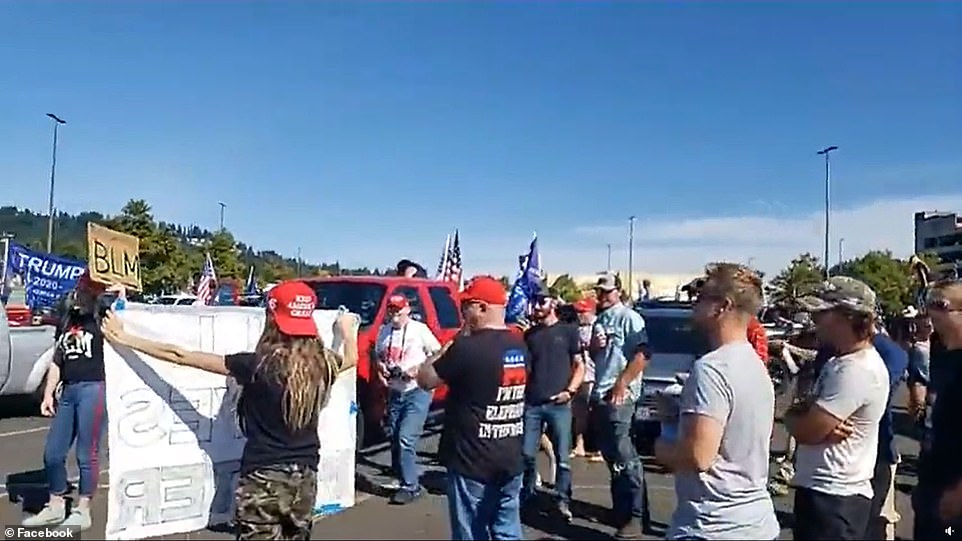 Fans of the president in their red MAGA hat held up a sign reading: ‘All Lives Matter’, taunting the BLM crowd

‘I know for the most part, everyone here is gonna be pretty civilized. We’re all gonna support the president in safe way,’ said Brandon Beck, who was attending his first Trump rally.

He told Oregon Public Broadcasting: ‘Obviously we’re all gonna be in cars, none of us are gonna be burning, looting, or anything. We’re just trying to have fun and stay safe today.’

Joe Reminar told the site that he was a veteran of Trump rallies, and Saturday’s was the fifth or sixth he had attended.

‘Today is about freedom and showing that Antifa doesn’t have the full chokehold on Portland and that we’re taxpaying citizens and we don’t want shit tore up,’ he said.

‘We’re gonna be a major parade and showing strength for our president. Which we appreciate all that he’s done, keeping the economy going, fighting China on this virus, keeping us free and saving our Second Amendment.’

A crowd of Black Lives Matter activists turned up to meet them, waving their placards and engaging in tense confrontations.

A Black Lives Matter activist was pepper sprayed in another melee.

The convoy set off, with Clackamas County Sheriff’s Office vehicles blocking intersections around the Town Center mall to allow the parade of vehicles to pass through.

A heavy presence of Oregon state troopers was seen along Highway 224, the pro-Trump caravan’s primary route to Portland.

The caravan was intended to avoid downtown, but as night fell many of the cars strayed from the intended route and headed into the city center.

The caravan was due to disperse at 9pm.

A Black Lives Matter rally was being held across town, leading to concerns about flare-ups among the rival gangs.