A commuter rail conductor who was nearly blinded in a freak accident is now back on the job one year later with perfect 20/20 vision.

Matthew Dzierzanowski was in his garage in Wappingers Falls, New York, – 70 miles north of New York City – when a taxidermal deer head fell off the wall and one of the antlers pierced his eye.

By a stroke of luck, the antler missed the retina, which would have resulted in permanent vision loss.

However, the father-of-one suffered extensive damage – at one point only able to see two feet in front of him – and was told that he may never be able to go back to work.

But after several extensive surgeries, including a cornea transplant, Dzierzanowski has had his sight nearly completely restored.

Doctors say his case is one of the most extreme trauma cases they’ve ever seen and that his recovery is shorter than other patients with less severe injuries. 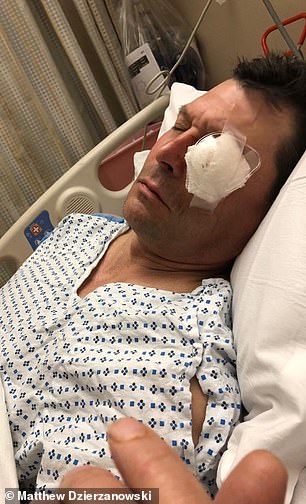 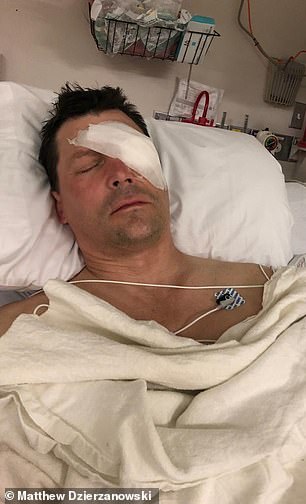 The antler missed the center of the eye and curved around the organ and damaged the back of the eye. After undergoing initial surgery to save the eye, Dzierzanowski could see no more than two feet in front of him. Pictured: Dzierzanowski when he was first injured in May 2019

In May 2019, Dzierzanowski and his wife were preparing to have some people over to their house for a gathering.

His wife was in the kitchen while he and his daughter, age one at the time, went to take tarps off of picnic tables.

With his daughter in one hand and the folded tarps in the other hand,’ he made his way to the garage, which is separated from the house.

One of the tarps accidentally hit a deer on the wall, which fell and one of the antlers pierced Dzierzanowski’s left eye.

‘The Initial shock was like: “Okay, is not good” but the first instinct was: “Is my daughter okay?'” he told DailyMail.com.

‘Everything just went dark…Once I regained a little strength, I knew right away it was just a horrible situation that was going on.’

Dzierzanowski’s daughter was luckily uninjured, but he was forced to crawl 60 feet from the garage to the house to get his wife to call an ambulance.

While waiting for the ambulance, fluid – ‘like a thick olive oil’ as Dzierzanowski explains it – was coming out of his eye.

Dzierzanowski was rushed to Vassar Brothers Medical Center in Poughkeepsie, where he said he was in the worst pain he had ever felt in his life.

‘Indescribable [pain like] you can’t even imagine,’ he said. 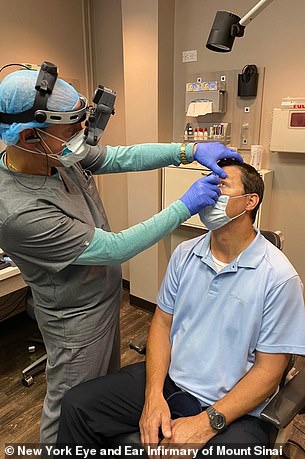 Two doctors at Mount Sinai determined the cornea was too damaged and performed a cornea transplant in December 2019. Pictured: Dr Gentile (left) and Dzierzanowski during an appointment, July 2020

‘They’re pumping me with morphine and that really wasn’t working all that well and I think they stepped it up to like a fentanyl.’

He was soon airlifted to Westchester Medical Center, where he underwent a seven-hour procedure in which doctors literally saved the eye.

During the surgery, doctors discovered that the antler had not pierced the dead center of the eye but had gone a bit to the left, which likely saved Dzierzanowski’s eye from permanent damage.

‘Then I was discharged and the only pain medication that was really allowed was Advil and that was it,’ he said.

‘So it was a very long recovery because it was one of the most excruciating, painful times. Any type of movement, any pressure, even simply going to the bathroom was extremely painful.’

However, the couple soon began to search for a retinal specialist who would be able to save his sight. At the time, Dzierzanowski could only see two feet in front of himself, and mostly black at that.

A family friend recommended Dr Ronald Gentile, director of the Ocular Trauma Service and a retina surgeon at the New York Eye and Ear Infirmary of Mount Sinai.

‘The deer antler…actually hit the back of the eye,’ Gentile told DailyMail.com (6:00)

‘When it hit the back of the eye, there are some vital structures there…We didn’t know where this thing actually penetrated.’

The chances of Dzierzanowski regaining his vision to what it was before were less than two percent. But the chances without treatment were zero percent. 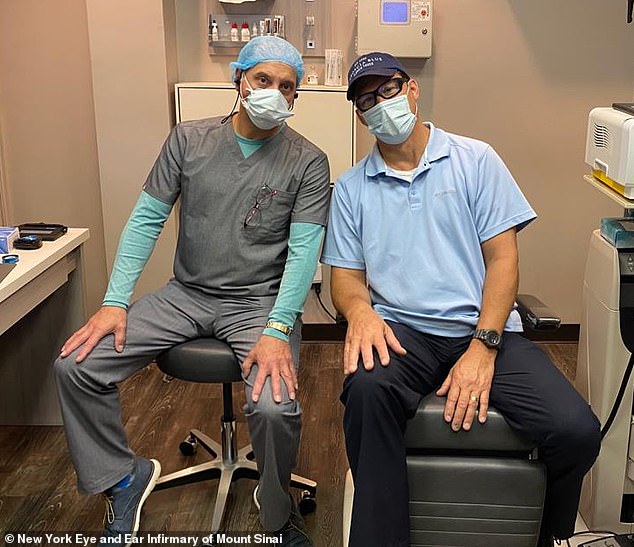 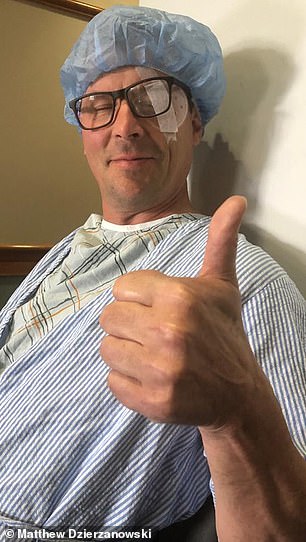 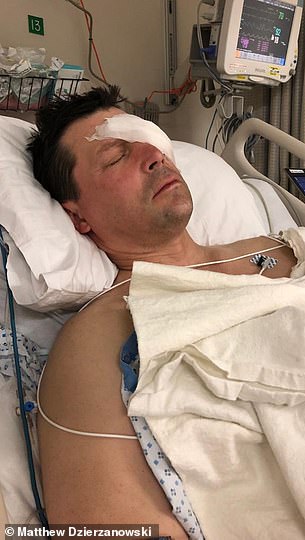 At the last follow-up visit, with a contact lens in, Dzierzanowski (left and right) reached 20/20 vision. He is now back at his job as a conductor on the Metro-North Railroad

‘When I first saw him, I said: “The chances are slim…but I’ll do everything I can possibly can to try to give you best possible outcome,”‘ Gentile said.

He and Dr John Alijan, an associate clinical professor of ophthalmology at Mount Sinai, had four goals: save the eyeball, get back as much vision back as possible, get both eyes working together and make sure the eye is cosmetically pleasing.

The first surgery was on June 12, which cleaned and flushed the eye out. Dzierzanowski said afterwards that he actually was able to discern outlines of people event though his vision was incredibly blurry.

Alijean wanted to keep the original cornea but it became increasingly clear that Dzierzanowski would need a transplant.

Seven months after the injury, on December 12, the pair scheduled the surgery, with the donated cornea coming from a 56-year-old woman who had recently died in Tampa, Florida.

Dzierzanowski admits that while he was looking forward to regaining some of his sight, he was feeling melancholy. 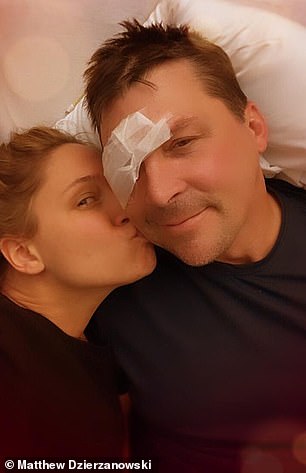 Dzierzanowski hopes that others are inspired to not give up when facing their own health issues. Pictured: Dzierzanowski (right) with his wife after his injury, undated

‘A couple of weeks before Christmas…it wasn’t the most exciting and it became a little depressing because it was like: “Okay, Christmas is two weeks away and I’m going to be in bed and not be able to move.”‘

The surgery went off without a hitch. His vision, which at the time was considered legally blind, started to improve, especially once they put in a contact lens.

However, he needed 20/20 vision and the doctors weren’t sure if he could get there. But he gradually improved and at the last follow-up visit, with a contact lens in, he reached that goal.

Dzierzanowski said it was the motivation to see his daughter grow up and to keep working that kept him going.

‘You want to see your daughter with both eyes playing  soccer and stuff like that,’ he said.

He’s now back at his Metro-North job, albeit wearing safety glasses, and takes steroid drops twice a day to prevent glaucoma.

‘Matthew is a valuable member of the Metro-North team and we are so glad to have him back,’ Metro-North President Cathy Rinaldi said in a statement to DailyMail.com.

‘His strong work ethic and wonderful personality were missed by his coworkers and riders alike. Knowing what he went through is a shining example of his resiliency that has been on display throughout his nearly 20 years at Metro-North.’

Dzierzanowski hopes that his story inspires others to not give up hope when facing their own health issues.

‘You have to try,’ he said. ‘You have to see how far you can push it. It’s frustrating and it’s painful, but like everything else, you have to keep on fighting.’

world news Teacher donates a kidney to her student’s mother. Now both women are hoping to find a kidney for a neighbor