Tens of thousands of sunbathers flocked to beaches across Sydney on Sunday to enjoy the warm weather despite a worrying coronavirus cluster in the city threatening to explode with 28 active cases.

Bondi Beach and Coogee in the city’s eastern suburbs were packed with thousands of people by midday while Manly Beach was the same despite seven new cases of coronavirus recorded in NSW on Sunday.

Lifeguards used loudspeaker systems to try and encourage swimmers and sunbakers to practice social distancing but photographs showed crowds packed together like sardines. 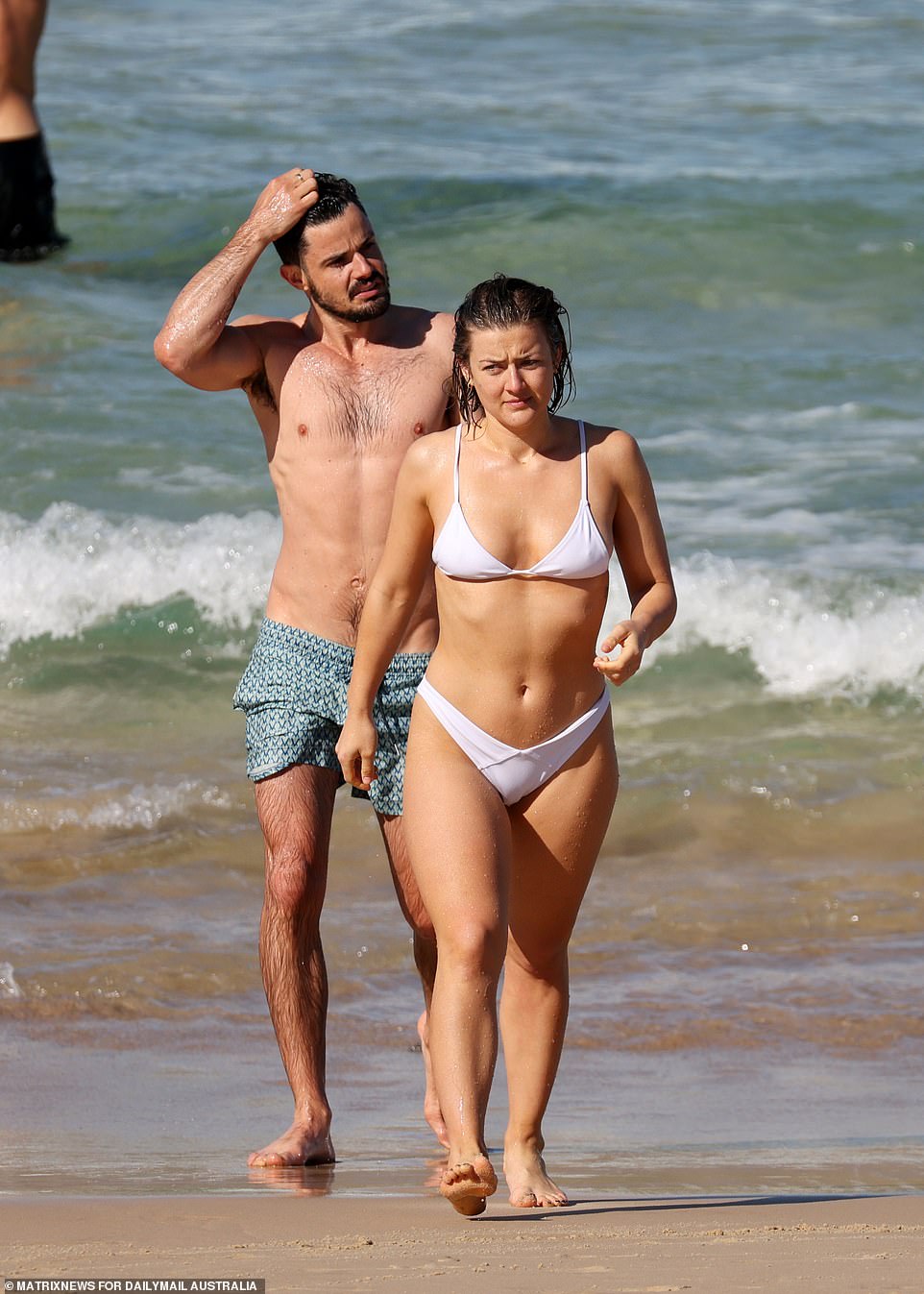 The feeling on the sand was mixed.

‘Who cares (about covid). It’s just a flu that only kills people who are about to die anyway,’ one beachgoer at Coogee told Daily Mail Australia.

‘We can’t do what that dictator is doing in Melbourne. Sun’s out, guns out. Yeah the boys.’

As the mercury reached 24C at 2pm, another local said she’d seen enough.

‘I’m going home immediately. These people are so irresponsible. It makes my blood boil. If just one of them has coronavirus it will be a disaster and we’ll all be back in lockdown next week. Social distancing has gone completely out the window.’

Lifeguards and police were closely monitoring Bondi on Saturday amid fears the crowds would force the local council into shutting down the beach.

A NSW Health spokeswoman told the SMH that Waverley, which covers Bronte to Bondi, remained an area of concern for coronavirus community transmission.

But residents in Bondi and Coogee ignored warnings to social distance and wear face masks on Sunday; instead packing the beachfront in a bid to soak up the winter sunshine.

At Manly, on Sydney’s northern beaches, the promenade was packed with queues to get into nearby pubs and restaurants as shirtless beachgoers made their way down the strip to the sand. 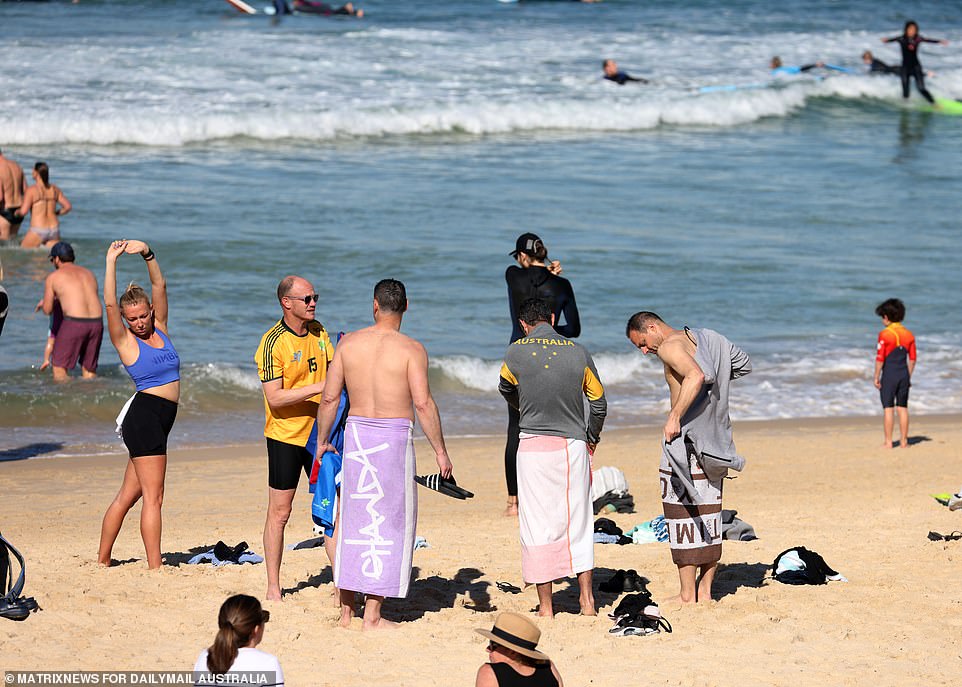 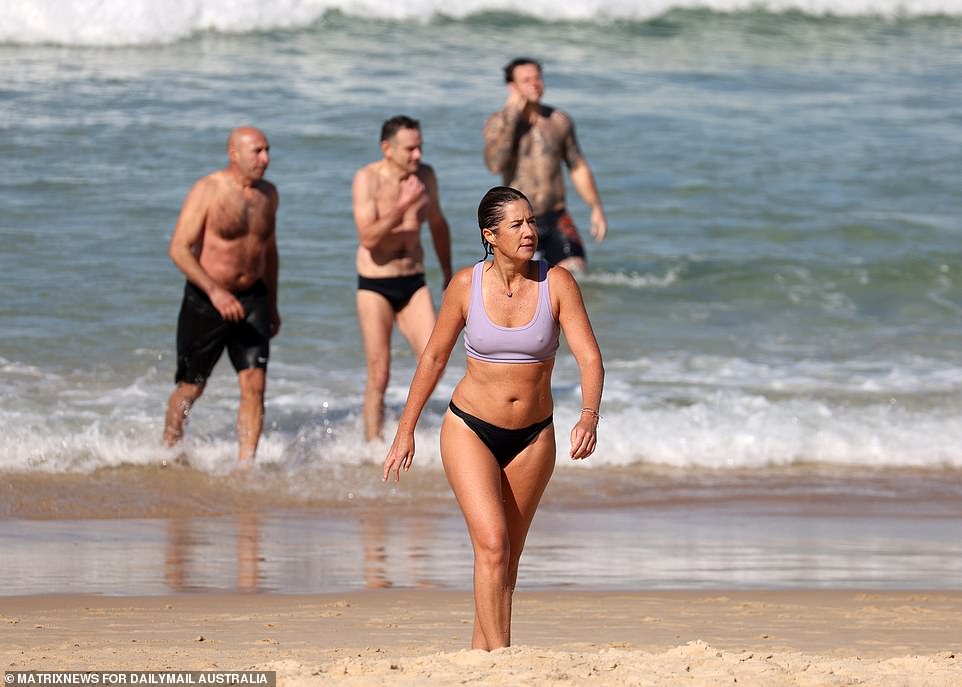 The return of warm weather has sparked fears the beaches could be once again closed to the public like they were in March when the outbreak began.

Waverley Mayor Paula Masselos is actively warning people to avoid the beach if it looks busy – or risk facing similar consequences from the first lockdown.

‘We need to remember that we are still in a pandemic and we need to adapt our behaviour to that reality,’ Cr Masselos told the Sydney Morning Herald.

‘If you are considering making the trip out to Bondi tomorrow, and the beaches look busy, please come back another time.’

‘The last thing we want to do is to have our close our beaches.’

Under New South Wales health guidelines residents are allowed to gather in groups of up to 20 people in public places, including parks and beaches.

But lifeguards are urging beachgoers to try and stay one ‘towel-length’ apart from others and avoid crowding inside the flags. 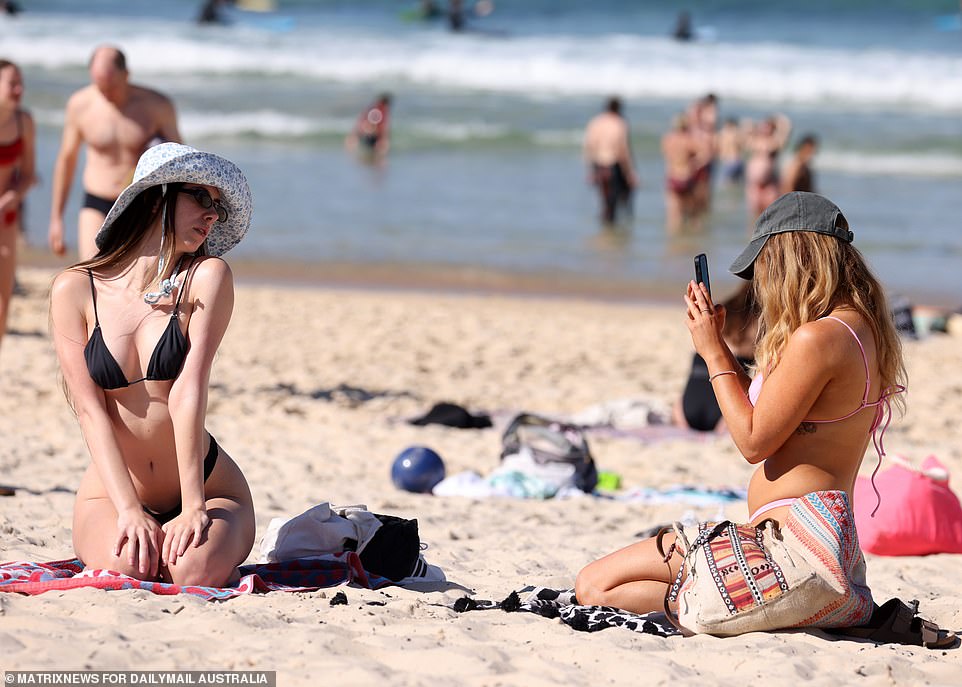 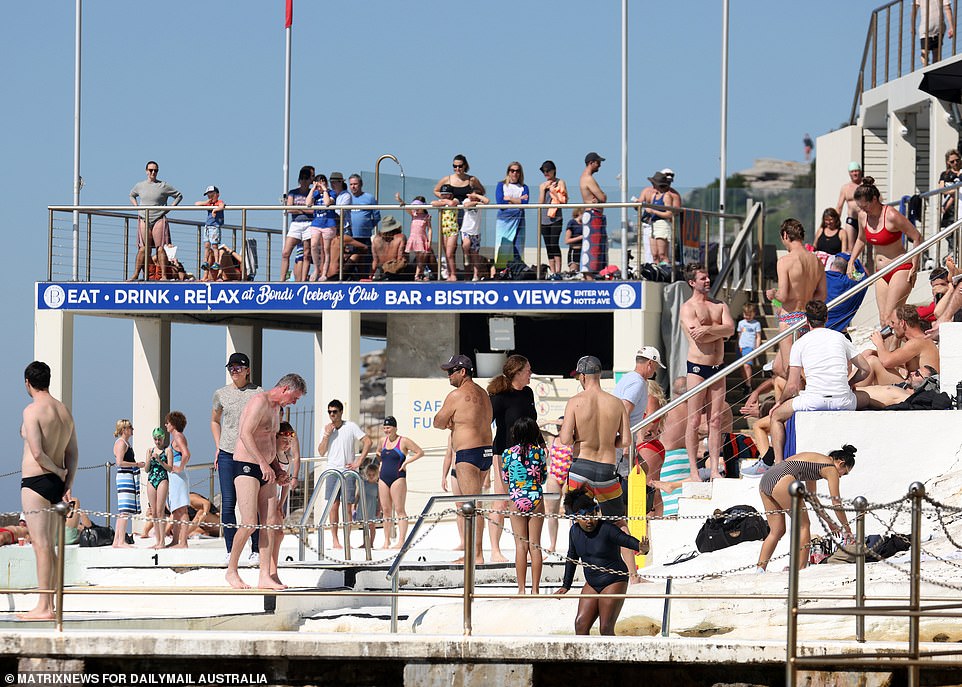 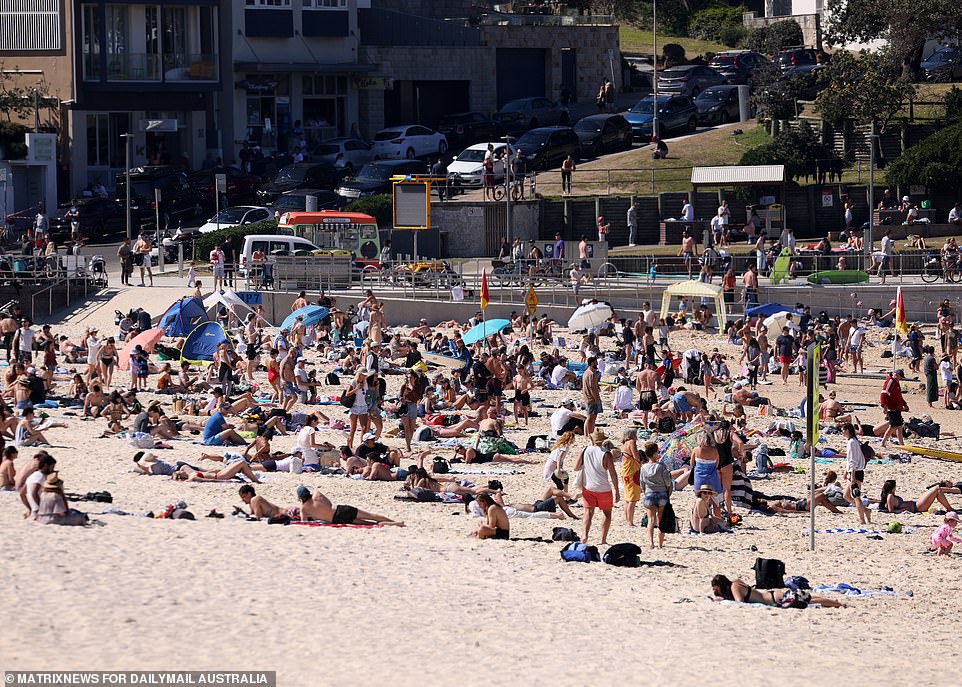 Beaches in the Waverley and Randwick local government areas were closed in March after visitors failed to comply with social distancing restrictions.

Bondi and Bronte were closed for four weeks, with those who broke the rules threatened with hefty $1,000 fines.

Nearby beaches Coogee, Clovelly, Maroubra and Malabar were closed for three weeks.

Of the seven new cases recorded in NSW on Sunday only one was from a returned traveller, meanwhile one is under investigation and the other five are linked to a known case or cluster.

The list of venues put on high alert has also grown by seven after COVID-19 cases visited locations including a suburban shopping centre, a popular CBD gym and a health clinic.

Anyone who attended the venues is considered to be a casual contact of the confirmed cases and must monitor for symptoms.

A handful of bus routes have also been told to watch for symptoms of COVID-19.

St Paul’s Catholic College in Greystanes will be closed on Monday for cleaning, NSW Health said on Sunday. 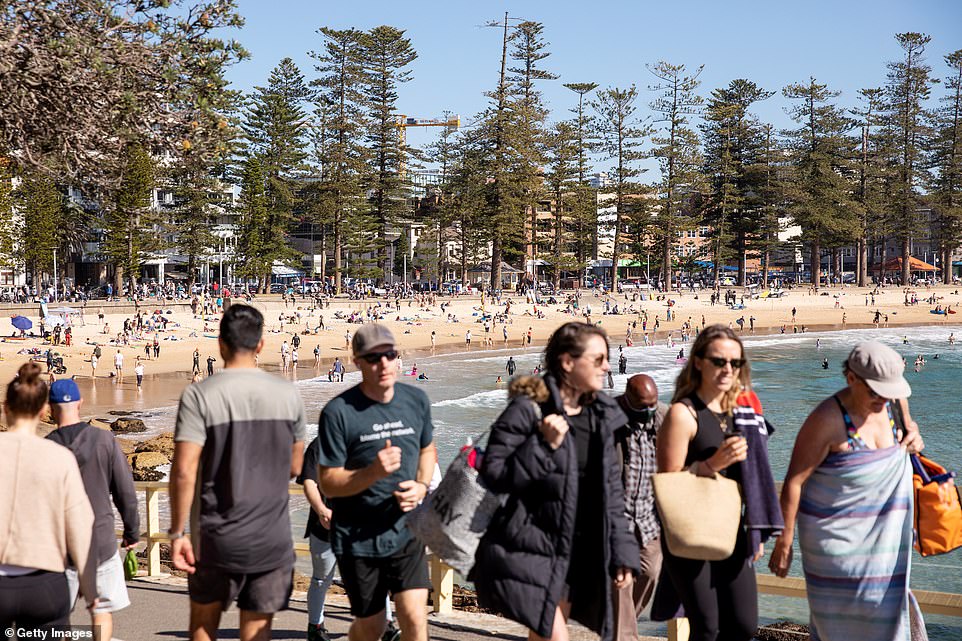 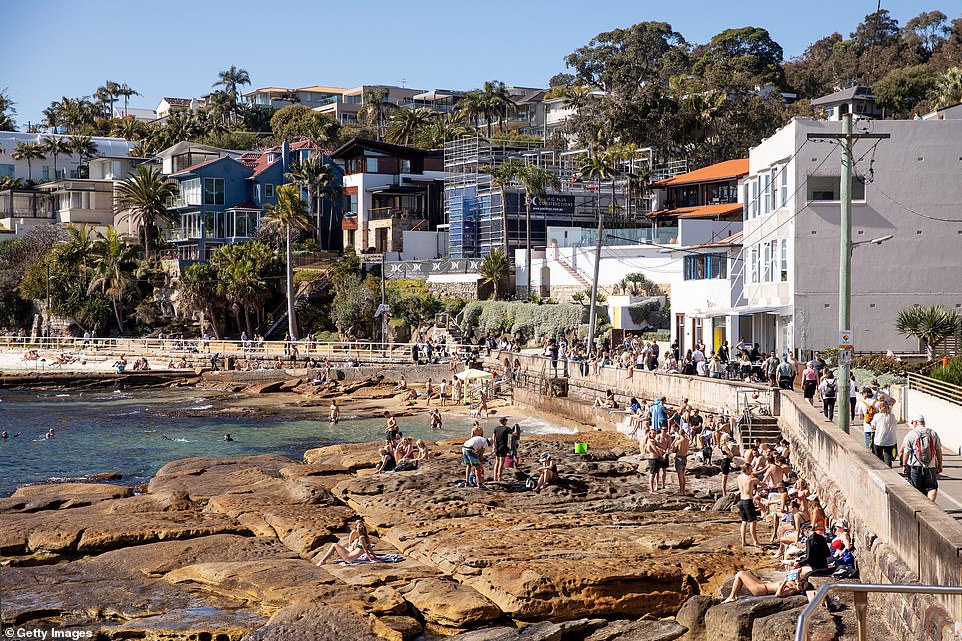 People who attended the City Tattersalls gym in the Sydney CBD between 8am and 2pm on August 19, 21, 23, 24 and 25 are now considered close contacts and must isolate themselves and get tested immediately.

People who exercised at Virgin Active gyms on Pitt and Margaret Streets between 5pm and 6.40pm on August 25 and 26 are also urged to remain alert.

Authorities are also investigating the source of an infection acquired by a staff member at the Surry Hills Police Cells Complex.

As a precaution, NSW Health has advised people living or working in the Greater Sydney metropolitan area and Central Coast to refrain from visiting aged care facilities until September 12.

The preventative measure to keep the virus from infiltrating nursing homes and affecting the vulnerable elderly residents will mean many will be denied a visit on Father’s Day.

Meanwhile, three Sydney schools that closed on Friday after staff members contracted the virus will re-open on Monday. 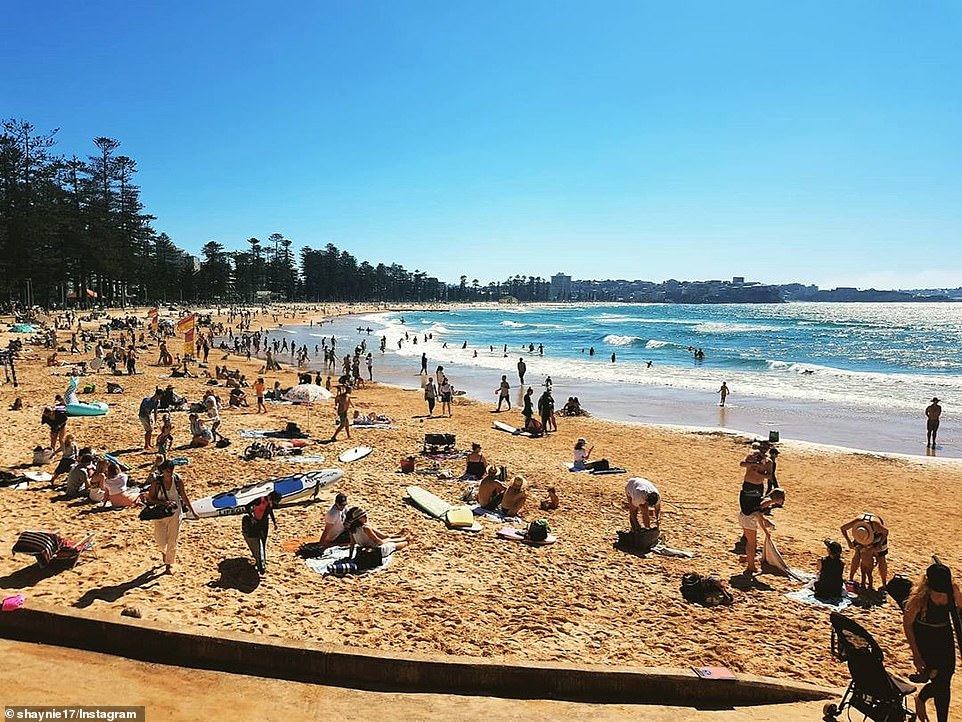 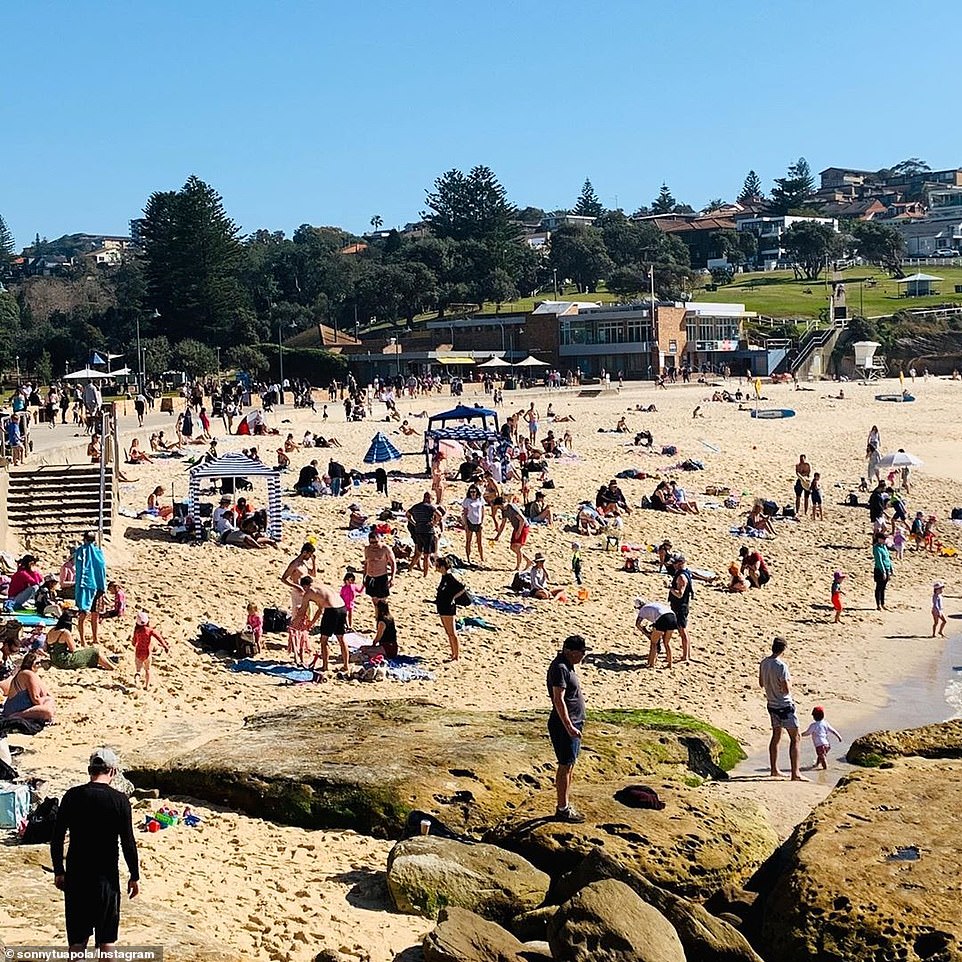 There are 66 active COVID-19 cases in the state, including six who are in intensive care, of whom three are on ventilators.

It comes as thousands of people stood shoulder-to-shoulder at Melbourne’s St Kilda beach as warmer weather lured large crowds to the beach over the weekend.

Victorian Premier Daniel Andrews warned that Police and Australian Defence Force personnel would be patrolling beaches, the 18C sunshine on Saturday proved too much of a temptation for long-suffering residents in the midst of lockdown.

Melburnians have been cooped up since July 8 under Stage 4 stay-at-home orders, only permitted to leave the house between 8am and 5pm for essential reasons like grocery shopping, health appointments, work and exercise.

During that period new daily infections reached a peak of 723 coronavirus cases. On Saturday the number dropped to 94, the lowest day total since July 5. The number jumped to 114 again on Sunday.

Premier Andrews has remained adamant that it is too soon to ease the draconian restrictions.

When asked about the weekend’s warm weather forecast at a media conference on Friday, he said: ‘I’m not often disappointed in a good forecast, but I am a bit about that.’

He urged Victorians to follow the health officer’s directions and not flout the rules by heading to the beach unnecessarily.

‘Please don’t make any choices that would contribute to the spread of this virus.’

However on Saturday, he had eased his tone ever so slightly.

He stopped short at engaging in discussion about a ‘roadmap’ out of lockdown which is set to conclude on September 13.

But he did acknowledge crowds and gatherings could soon be part of Victoria’s ‘new COVID normal’.

‘I think our COVID normal can involve some crowds, but that will be a matter of medical advice,’ Mr Andrews said.

He added that the size of crowds would have to be determined by ‘how successful we are defeating the virus’.

‘The numbers need to be lower than they are now.’

Despite the small glimmer of hope for Victorians, Mr Andrews said: ‘I don’t think we will have 100,000 at the MCG for quite some time.’