By Andrea Blanco For Dailymail.Com and Ap

A 19-year-old Amazon employee has been arrested on suspicion of plotting a mass shooting at the depot where he worked with an AR-15 rifle, authorities said.

Rodolfo Valdivia Aceves was arrested for terrorism threats on June 27, according to San Antonio police.

According to the arrest report, Aceves told a colleague that “it would be a good idea to pull the fire alarm and get all the employees out of the building and commit a mass shooting,” News4 San Antonio reported.

Aceves was arrested at another location by SAPD covert ops units, as well as the SAPD street crimes unit without inconvenience, police said.

“This case highlights the importance of community collaboration and appropriate responses. It’s the essence of “seeing something, saying something,” San Antonio police said in a statement.

“Without the witness who came forward, this incident could have had a tragic outcome.”

Rodolfo Valdivia Aceves, 19, was arrested for terrorism threats on June 27, according to San Antonio police.

A colleague of Aceves told police she drove him and when she said she had to pick up her children from school, he allegedly said he knew where he was going to commit the mass shooting.

The colleague also claimed Aceves mentioned he “idolizes” the Uvalde shooter who killed 19 children and two adults at an elementary school on May 24, News4 reported.

After the arrest, police questioned Aceves’ father, who allegedly told authorities the 19-year-old had purchased an AR-15 rifle and his family were afraid of what he would do.

Police seized the rifle when Aceves was arrested.

Aceves’ father also said his son suffered from an unspecified mental illness and was hospitalized in a facility when he was 16, according to News4.

The man claimed that Aceves had recently stopped taking his medication, which he had been taking for two years. 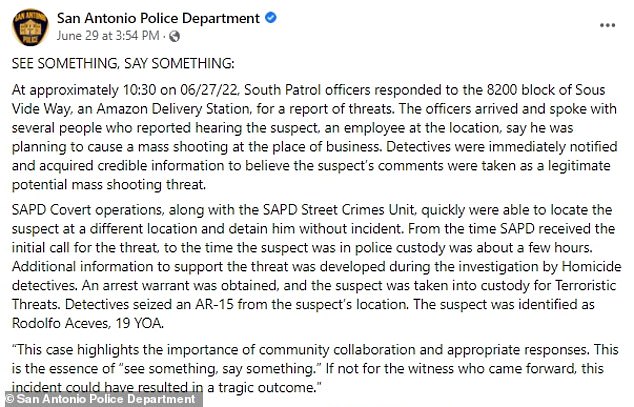 “This case highlights the importance of community collaboration and appropriate responses. It’s the essence of “seeing something, saying something,” San Antonio police said in a statement.

Aceves’ arrest comes amid an outbreak of mass shootings in the United States. The country has has witnessed 293 mass shootings so far this year, according to a Gun Violence Archive report.

Texas is the fourth state with the most mass shootings, having reported 129 in 2022.

On Saturday, a gunman killed two people and injured four others, including three police officers, before killing himself at a home in the Dallas-Fort Worth area.

Det. Haltom City Police Department. Matt Spillane said Sunday morning that all of those injured in the shooting in a residential area had non-life-threatening injuries and are expected to recover.

Spillane said officers returned fire after being shot while responding to a report of gunfire at a house around 6:45 p.m. One officer was hit in both legs and the other two in the arm. The suspect died of an apparent self-inflicted gunshot wound.

He said the Texas Rangers would take over the investigation. The motive for the shooting was not immediately clear.

“The focus is on how and why it happened,” Spillane told The Associated Press.

A woman was found dead inside a house and a man was found dead outside, Sgt. Rick Alexander told WFAA-TV during a Saturday night press conference. The older adult woman who initially called 911 was injured, he said.

The suspect was found with a “military-style rifle” and a handgun, Alexander said.

Salman Rushdie attacked while speaking at an event in New York

How to take advantage of usage-based billing – TechCrunch