A policeman was left with blood gushing from his head and shoulder after a man allegedly slashed him with a knife during a midnight arrest.

A Lakemba man, 32, allegedly attacked two police officers with a knife and bit another on York Street in the Sydney CBD at 12:20 am on Wednesday.

Police were called after the man allegedly harassed a food delivery rider on George Street, which is one of the busiest streets in the city centre.

Officers then approached the man as he was walking along the nearby York Street, which is when he allegedly pulled out a knife and started attacking them.

A policeman (pictured), 40, was allegedly slashed in the head and shoulder by a Lakemba man, 32, on York Street in the Sydney CBD at 12:20am on Wednesday

A male senior constable, 40, was slashed across his head and shoulder while his male acting sergeant, 39, was slashed on the hand.

Meanwhile, a male probationary constable, 20, was bitten on his tricep.

The 32-year-old man was then disarmed and arrested, before being taken to St Vincent’s Hospital for assessment.

Pictures from after the attack show blood pouring from the senior constable’s head, covering most of his face.

A bite mark and blood can also be seen on the youngest officer’s tricep.

The injured officers were also taken to St Vincent’s Hospital, where the 40-year-old officer underwent treatment for lacerations on the left side of his head and another on his upper arm and shoulder. 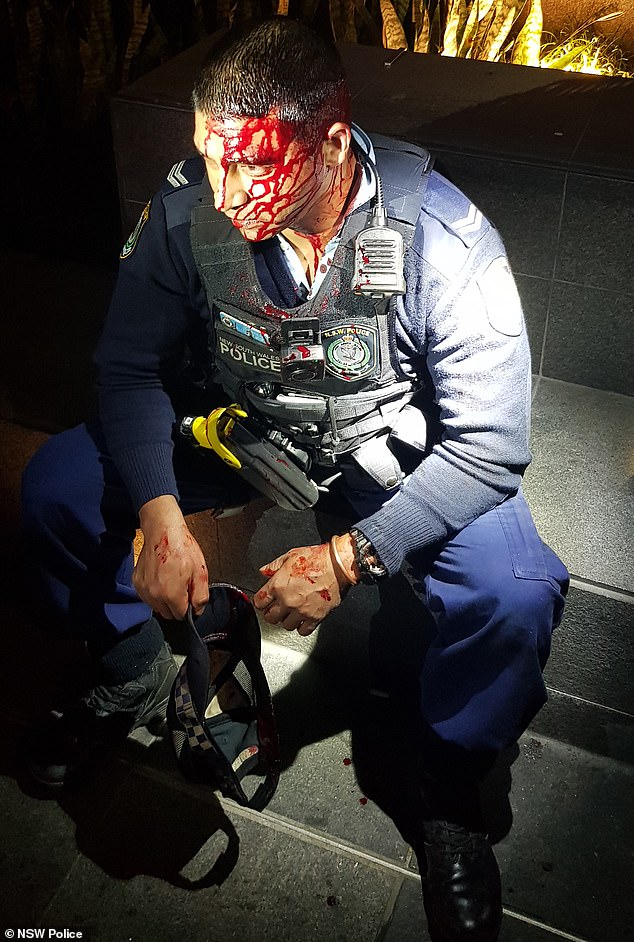 The injured officers were also taken to St Vincent’s Hospital, where the 40-year-old officer (pictured)underwent treatment for lacerations on the left side of his head and another on his upper arm and shoulder area

The alleged attacker was taken to Day Street Police Station following his discharge from hospital.

The man has been refused bail to appear at Downing Centre Local Court on Wednesday.

A male probationary constable (left), 20, was bitten on his tricep with a bite mark (right) and blood visible