Many states are offering tax cuts and bonuses for public servants as the fiscal slump of early 2021 gives way to good times fueled by booming markets, rising incomes and federal aid.

State revenues between April and November rose 24% from 2020 to 2021, according to a survey by the Urban Institute think tank. Thirty-two states said revenue collections for fiscal years ending in 2022 were ahead of projections, according to the National Association of State Budget Officers, including South Carolina, Minnesota and Washington.

As spending increases in some areas, including K-12 and higher education, states are in many cases directing budget surpluses to one-time uses rather than programs with long-term commitments or permanent tax cuts. Officials say that’s because federal pandemic-related aid is ending and revenue growth could stall if the economy slows.

Along with tax breaks and bonuses, states are paying off debts and pension obligations and investing in short-term infrastructure projects. In addition, state reserve funds hit an all-time high of nearly $113 billion for fiscal year 2021, the association of budget officers said. 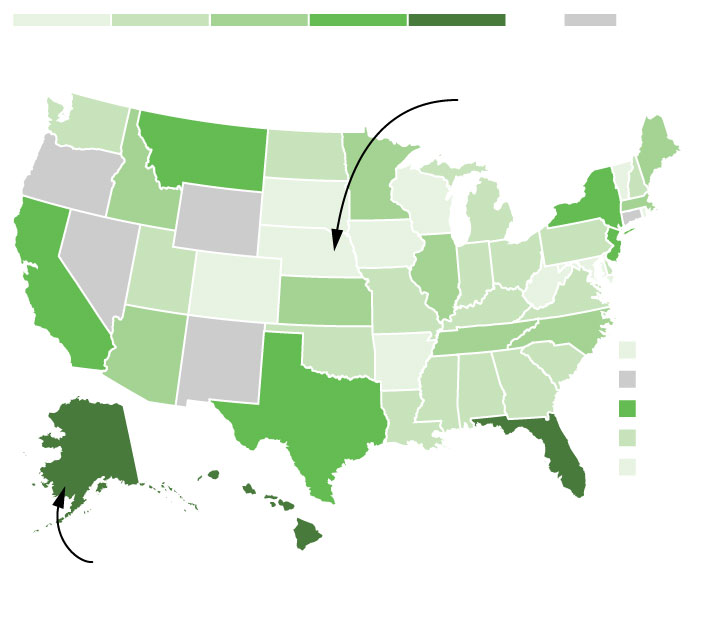 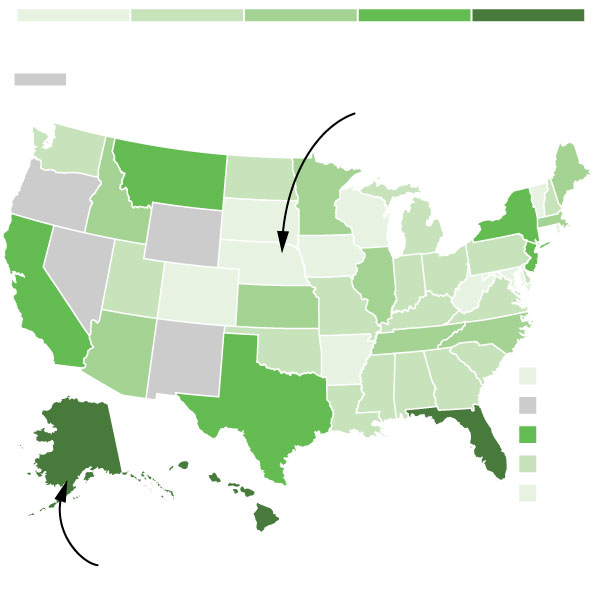 Congressional Democrats in March approved the $1.9 trillion U.S. bailout package, which included $360 billion for state and local governments. Republicans have opposed the funding, saying money earmarked for pandemic relief should not be used for states’ long-term budget challenges.

Last week, California Governor Gavin Newsom unveiled a $286.4 billion budget plan. This spending is supported by an estimated $45.7 billion surplus for the current fiscal year and next, of which more than $20 billion can be used for discretionary spending. Much of that is due to higher-than-expected tax receipts from the state’s highest-income residents, who make more money on stocks and investments.

Mr Newsom, a Democrat, has proposed spending $9 billion of the surplus on budget reserves and pension debt and allocating $5.5 billion to restore tax breaks for businesses that have been suspended in the start of the pandemic, when state officials thought they were facing down a massive $54 billion deficit that never materialized. The governor’s budget also includes billions in one-time spending to address homelessness, wildfires, climate change and the Covid-19 pandemic.

Maryland Gov. Larry Hogan, a Republican, proposed a budget on Wednesday that would add $2.4 billion to the state’s rainy day fund and also begin phasing out the seniors’ income tax. .

In Rhode Island, Gov. Dan McKee, a Democrat, said this week he would spend $150 million on infrastructure projects that fight climate change.

Coffers are particularly full in New York, where tax revenues tied to Wall Street banks and brokerages make up nearly a fifth of state revenue and higher tax rates on high earners have entered in force last year. Officials said tax revenue for the next fiscal year and the remainder of the current fiscal year is $9.6 billion higher than their October projections.

Governor Kathy Hochul proposed a budget of $216.3 billion on Tuesday, including $2.2 billion for one-time property tax relief checks and $1.2 billion for bonuses of up to $3,000. for healthcare workers.

Additionally, the Democrats’ budget calls for a 7% increase in funding for schools, depositing more than $10 billion into reserve accounts that held about $4 billion at the start of the pandemic.

“This is a once-in-a-generation opportunity to make thoughtful, purpose-driven investments in our people that will pay dividends for decades,” said Hochul, who is seeking her first full term this year.

How might you be affected by the proposed tax cuts? Join the conversation below.

Republicans have said the state should try to cut income tax rates, which Democratic lawmakers voted to increase last year. New York residents are taxed at 10.9% on income over $25 million. New York City’s highest income tax is 3.88%, which means the highest earners in the city face a total marginal income tax of 14.8%, the highest in the country.

Republican State Assembly Leader Will Barclay said a proposal to accelerate planned tax cuts for people filing up to $269,000 in income will not take effect soon enough. “Our cost of living crisis is not new, it hasn’t improved, and that’s why we lead the country in departures,” he said.

State Budget Director Robert Mujica said it was too early to announce a plan for the highest tax rates. Mr. Mujica said there was no evidence that the state’s higher tax rates prompted wealthy people to leave the state.

While most states begin their fiscal year in the summer, New York’s begins April 1, and Ms. Hochul must reach a deal with Democrats in the Legislative Assembly before then.

For the first time in recent memory, the state is projecting no deficit at any time over the next five years.

—Christine Mai-Duc contributed to this article.