By JOE DAVIES FOR MAILONLINE

Britain’s gin industry has been booming for a decade and there is no sign of the trend slowing down.

In 2019, the Wine and Spirit Trade Association (WSTA) valued gin sales in the UK at £2.3billion, with more than 76 million bottles sold — 10 million more than in the previous year.

According to the WSTA’s Market Report, total UK spirit sales last year were worth more than £11billion, with around 400m bottles sold – meaning that one in every five bottles of spirits sold in the UK in the last year was gin.

Miles Beale, chief executive of the WSTA, said: ‘It’s been another phenomenal 12 months for gin and, despite recent reports suggesting the gin bubble may have burst, our numbers suggest the exact opposite.

Hollie Freestone, 29, a part-time web and app designer. She and her partner, George, produce their gin brand, Duck and Crutch, from a pretty shed in the courtyard of their flat in Kensington and supply the likes of Harvey Nichols

‘Looking at the popularity of British gin overseas is also cause for celebration.

‘£350 million, or around 46% of all British gin exports, head to the EU, and so it is imperative that the government works with the European Union to secure trade that is as seamless in the future as it is now.’

One reason for the explosion in small-scale gin sales may simply be availability. In 2013, according to the WSTA, there were only 152 gin distilleries in the UK. That figure has now more than doubled to 315.

What has changed? Well, until a few years ago, HM Revenue & Customs (HMRC) tended only to issue licences for commercially made gin if it was produced in very large stills, which were unsuitable for use in most people’s homes and gardens.

Nicholas Cook, director general of industry body The Gin Guild, says: ‘Ten years ago, Sipsmith became the first craft distiller to successfully argue that gin could be made commercially using small stills, and that they qualified to be licensed by HMRC. This spearheaded a renaissance.’ 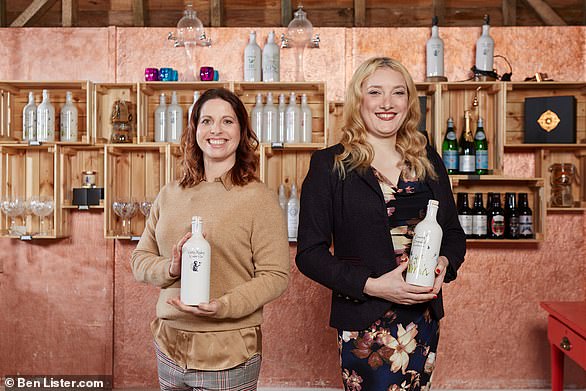 Kate Gregory, 45, and Helen Muncie, 41, co-own Gin Kitchen, which they now run from a 170-year-old barn on a nearby farm. They sell to the on and off trade and make bespoke gins for the likes of Fortnum & Mason

But how did gin become so popular and where did the spirit originate?

The definition of gin is a juniper-based spirit with a bottled strength of at least 37.5 per cent ABV (alcohol by volume). Commercial gins also contain herbs, spices and flavourings known as ‘botanicals’.

The spirit derives its name from the Dutch word for juniper, ‘genever’, with references to the drink around in 13th century Flemish manuscripts.

It began its long association with the UK in the 16th century, when British soldiers fighting in the Netherlands drank the spirit before fighting, coining the term ‘Dutch courage’.

By the 17th and 18th centuries, gin had gained popularity in Britain to such an extent the government had to introduce five legislative acts to reduce its consumption. 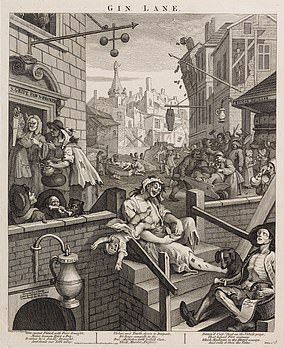 In 1751, British artist William Hogarth made two prints titled Beer Street and Gin Lane (pictured) designed to contrast the merits of drinking beer versus the evils of drinking gin

Gin joints allowing women to drink with men in ‘gin alley’ led to the drink being associated with women turning to prostitution and disregarding their children, earning the drink its nickname ‘mother’s ruin’.

In 1751, British artist William Hogarth made two prints titled Beer Street and Gin Lane designed to contrast the merits of drinking beer versus the evils of drinking gin.

The prints were designed to support what would become the Gin Act in 1751, which eliminated small gin shops, thereby restricting the distribution of gin to larger distillers and retailers, seeing the drink’s popularity in Britain wain.

It remained popular with British soldiers during the Empire, where it was mixed to mask the unpleasant tastes of antimalarials in India, resulting in what we now know as gin and tonic.

The drink had a resurgence in the early 20th century as a vital ingredient in classic cocktails, including martinis, the Gimlet to the Tom Collins.

However, it was only with the turn of the 21st century that gin has come back well into the mainstream, with sales figures in the UK rocketing over the last decade or so.

Independent distillers and craft gin makers have opened up across the country, and a resurgence in classic mixology has seen a boost in demand for the drink.