Kentucky senator Rand Paul and his wife were attacked by a mob of Black Lives Matter protesters who scuffled with police and almost shoved the senator to the ground as he left the White House Thursday night.

Video shows Paul and wife Kelley being surrounded by dozens of activists as they left the Republican National Convention where Trump had just accepted the party’s nomination, as police officers try to hold the crowd back.

At one point an officer holding a bicycle to protect the couple was shoved backwards, stumbling into Paul and almost knocking the Kentucky senator to the ground.

After being escorted safely to his hotel, Paul tweeted thanking police, saying there were ‘over 100 activists’ and that officers had ‘literally saved our lives’ from the ‘crazed mob’.

A large crowd that included Black Lives Matter activists had gathered near the White House on Thursday night in an attempt to drown out Donald Trump’s acceptance speech with firecrackers and airhorns.

Protesters surround Senator Rand Paul of Kentucky and his wife as they left the Republican National Convention late Thursday. He said he was attacked by an ‘angry mob of over 100 people’ 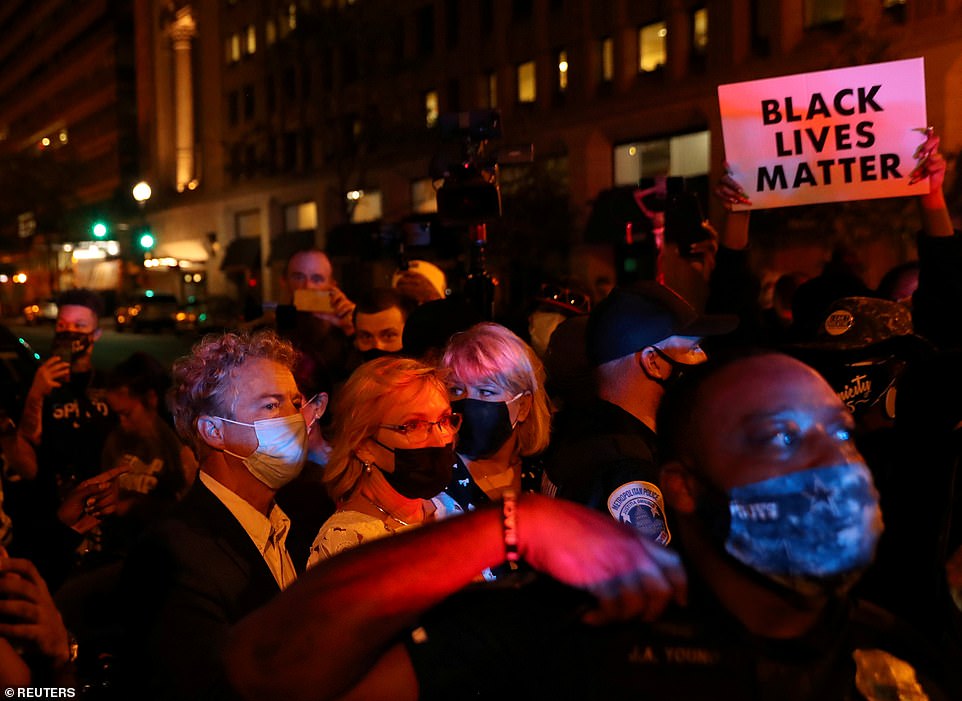 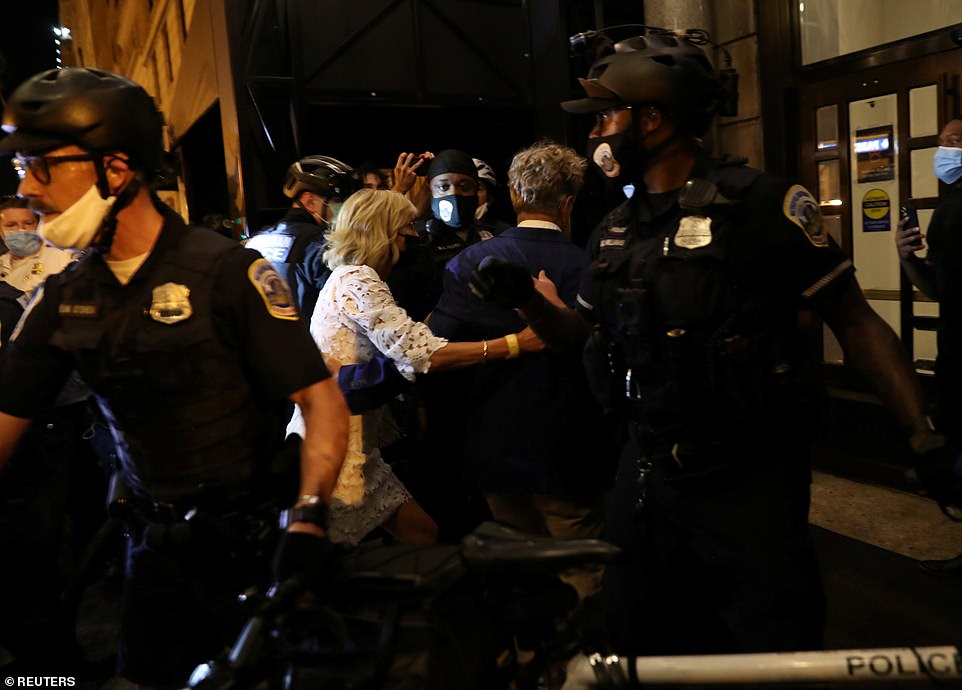 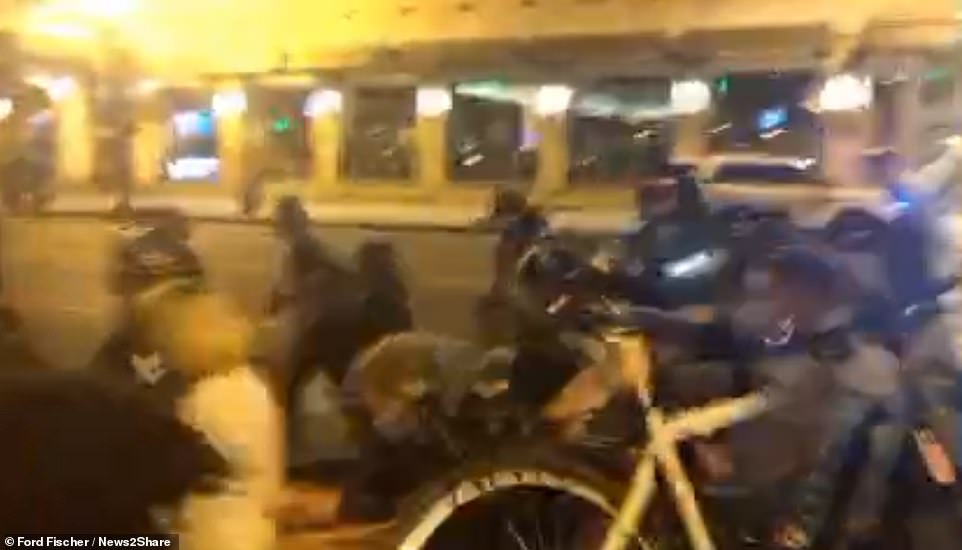 At one point a protester pushed a police officer carrying a bicycle (front right) who stumbled backwards into Paul (centre left), almost causing the Senator to fall to the ground

Rand tweeted after the incident: ‘Just got attacked by an angry mob of over 100, one block away from the White House. Thank you to @DCPoliceDept for literally saving our lives from a crazed mob.’

The Black Lives Matter movement is particularly strong in Kentucky, which Rand represents, following the police killing of Breonna Taylor.

The 26-year-old African-American EMT was shot eight times by Louisville police officers conducting a ‘no-knock’ warrant at her home as she was in bed on March 13, 2020. The officers behind that shooting have not been arrested or charged.

Rand was just one of many guests accosted by protesters as they left the White House.

As guests dressed in suits and dresses left the convention, they were bombarded by protesters in the streets who booed them, shouting ‘You racist a**’ and ‘Jacob Blake’.

The heckled guests kept walking even as demonstrators gave them the middle finger and insulted them.

Earlier in the evening protesters blared bullhorns, rang bells, and chanted ‘No justice, no peace!’ and ‘Black Lives Matter‘ when Ivanka Trump introduced her father shortly before 10.30pm.

When Trump started his speech dissidents set off firecrackers and amplified their chants in unison, all of which was audible from the South Lawn.

Blow horns could be heard in the televised broadcast of Trump’s speech. 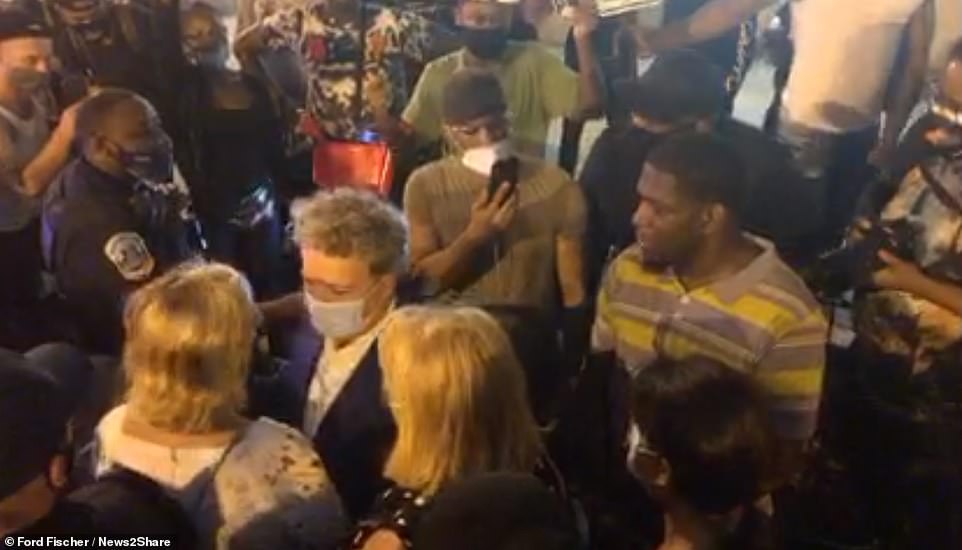 Rand Paul was just one of several guests who were accosted by the protesters, who had gathered outside the White House in order to drown out Trump’s speech 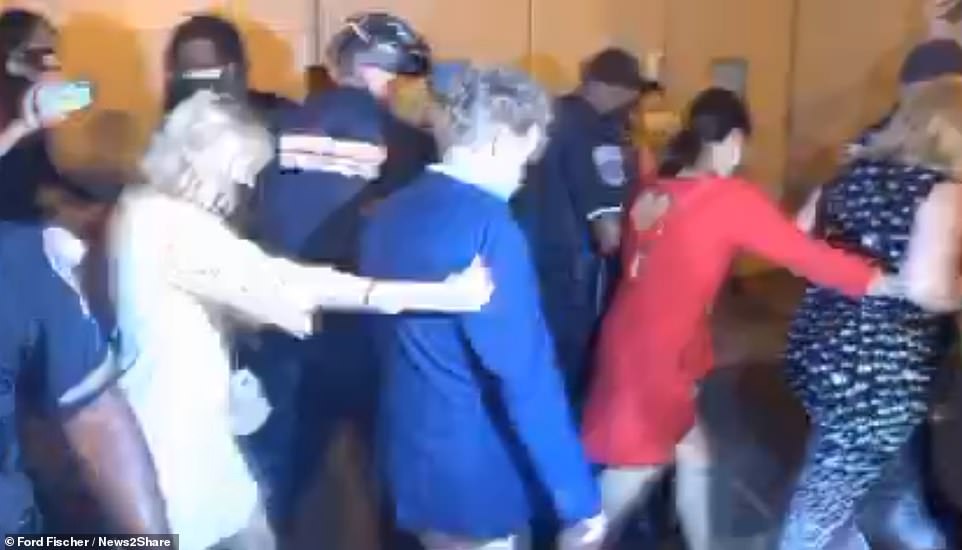 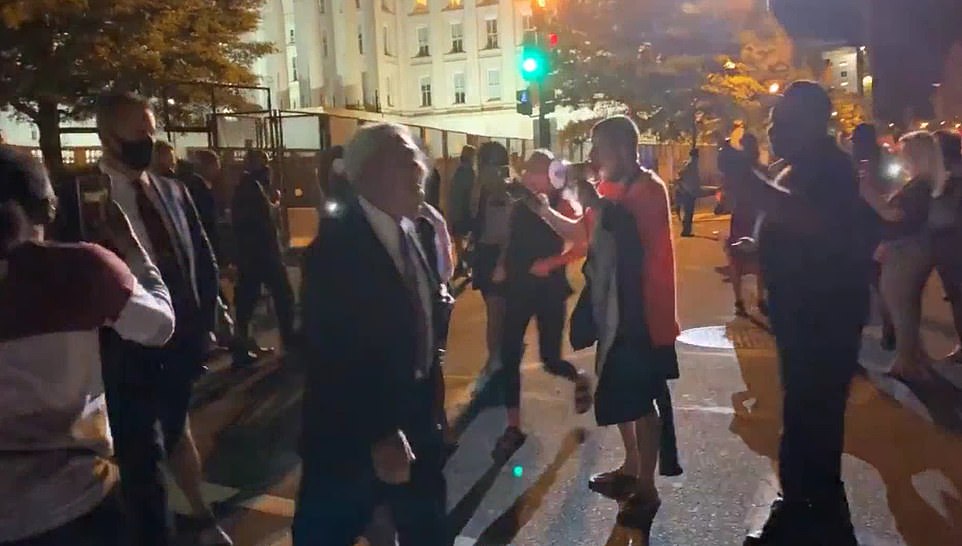 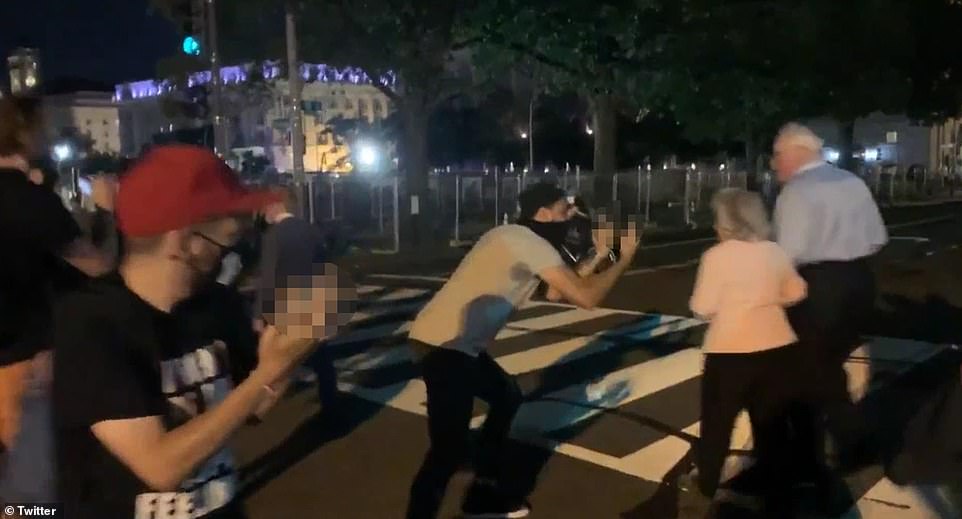 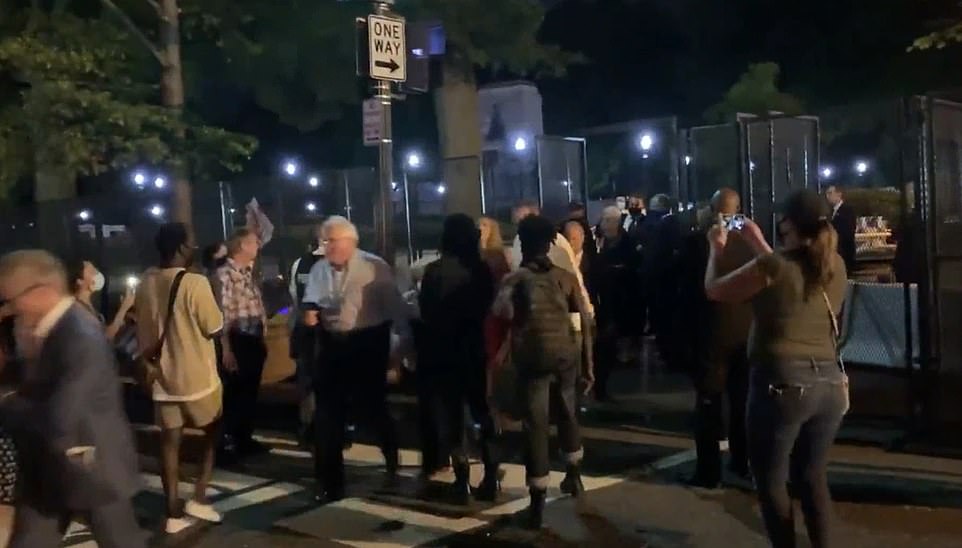 As guests dressed in suits and dresses left the convention, they were bombarded by protesters in the streets who booed them, shouting ‘You racist a**’ and chanting ‘Jacob Blake’ 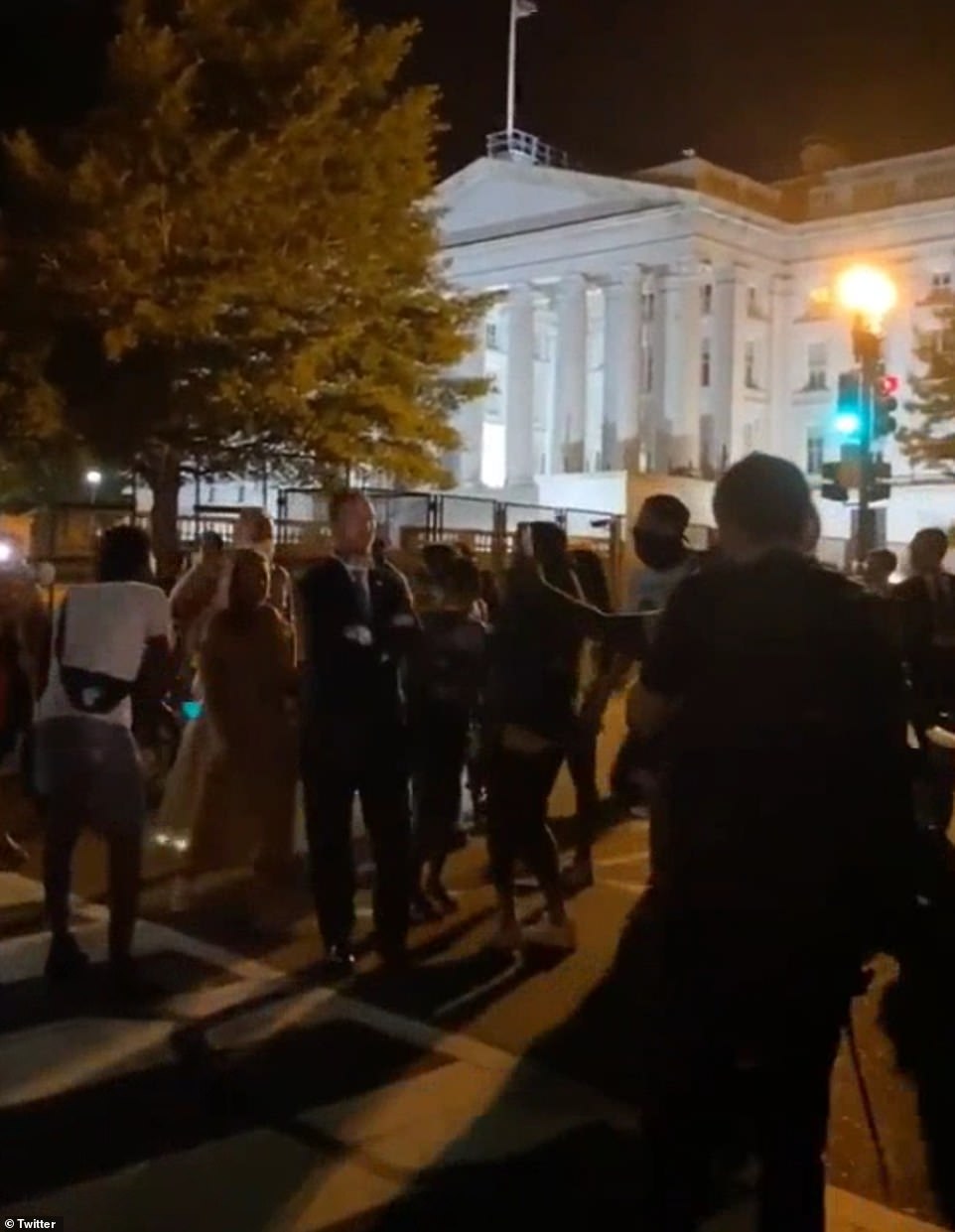 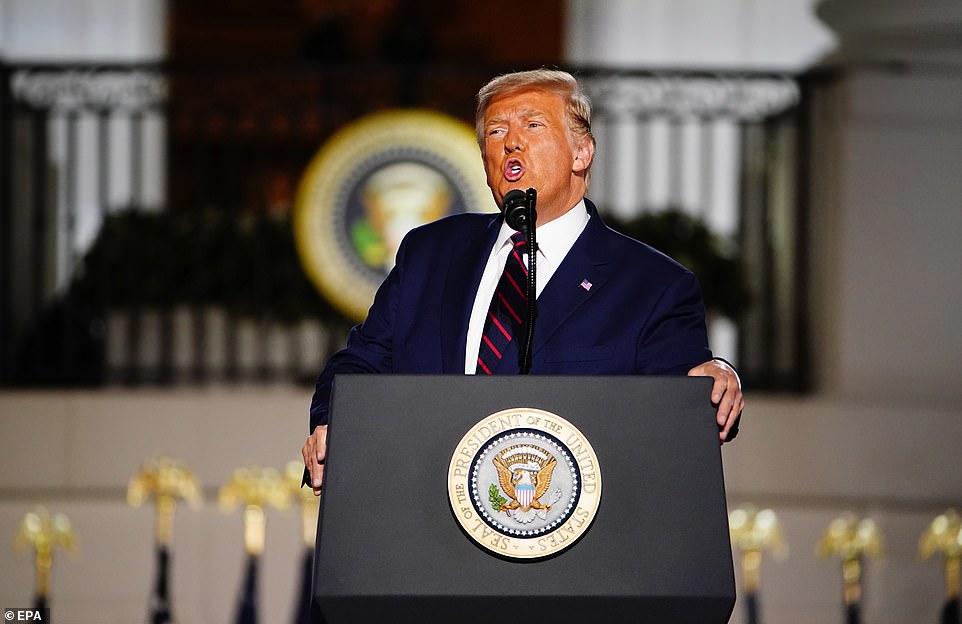 When Trump started his speech dissidents set off firecrackers and amplified their chants in unison, all of which was audible from the South Lawn. Some horns were also audible in his televised speech broadcast

Trump shared his speech late Thursday before a crowd of more than 1,500 on the South Lawn as MAGA supporters cheered ‘USA!’ and ‘Four More Years!’

There was no indication that Trump heard the protesters but speech spectators were seen turning around to see where the sounds of sirens, music and blow horns was coming from.

Protesters gathered between the White House and the National Mall and in Black Lives Matter Plaza.

‘Make some noise if you want to drown out Trump,’ protest organizer Justin Johnson said.

One group of activists were heard chanting ‘Black Women Matter, because we get stuff done.’ 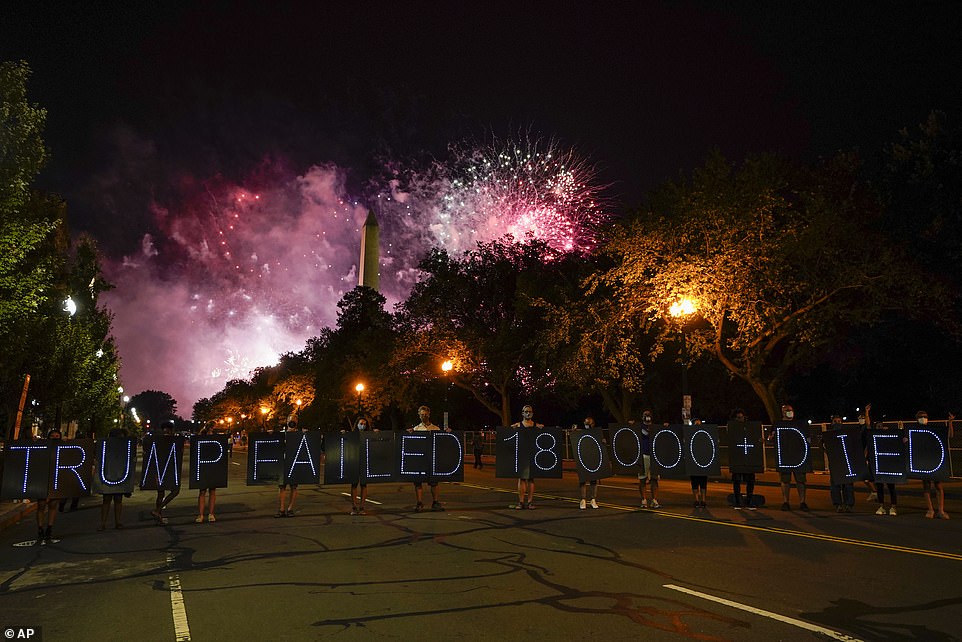 Protesters held up a lit sign that said ‘Trump Failed, 180,000+ died’ citing the death toll of the COVID-19 pandemic in the US 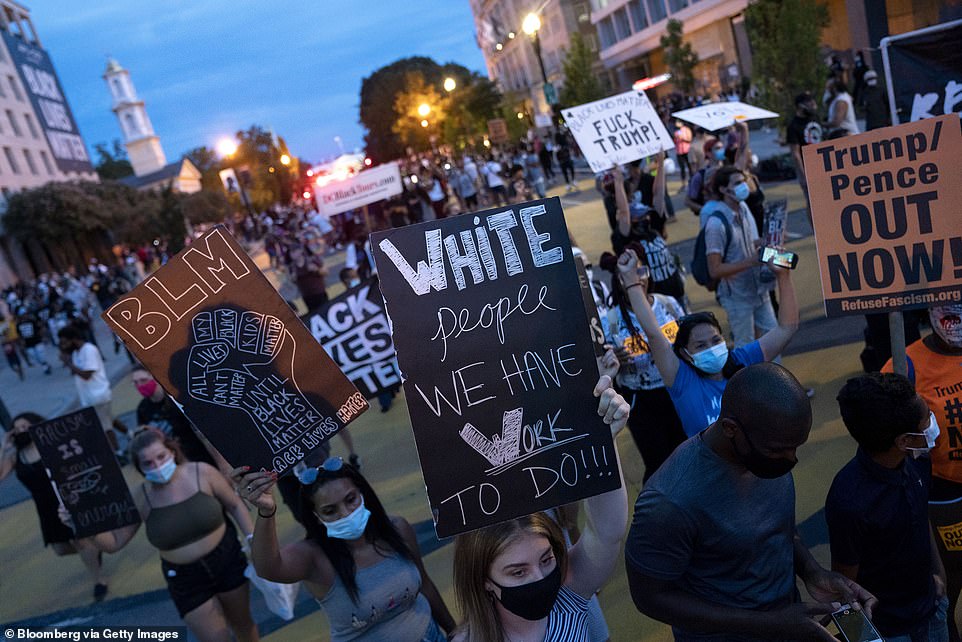 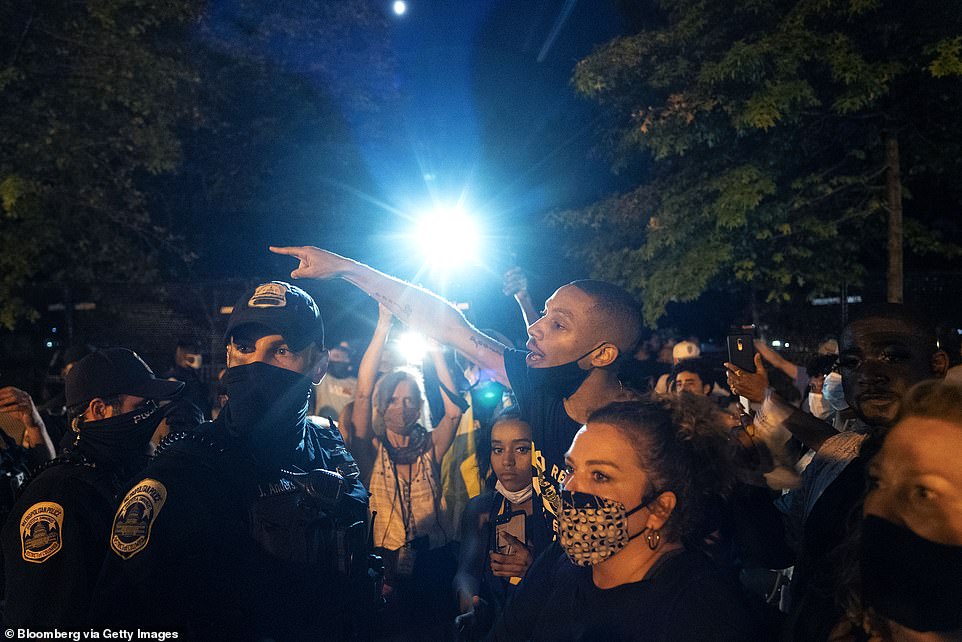 Large swathes of demonstrators gathered in front of the White House on Thursday ahead of Trump’s acceptance speech, hurling angry slogans and demanding he resign immediately 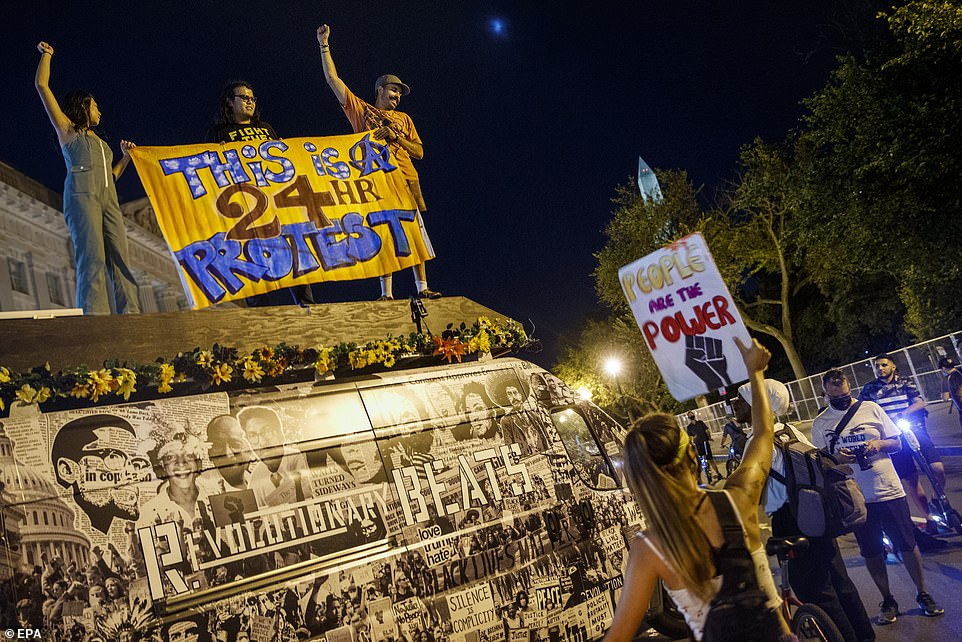 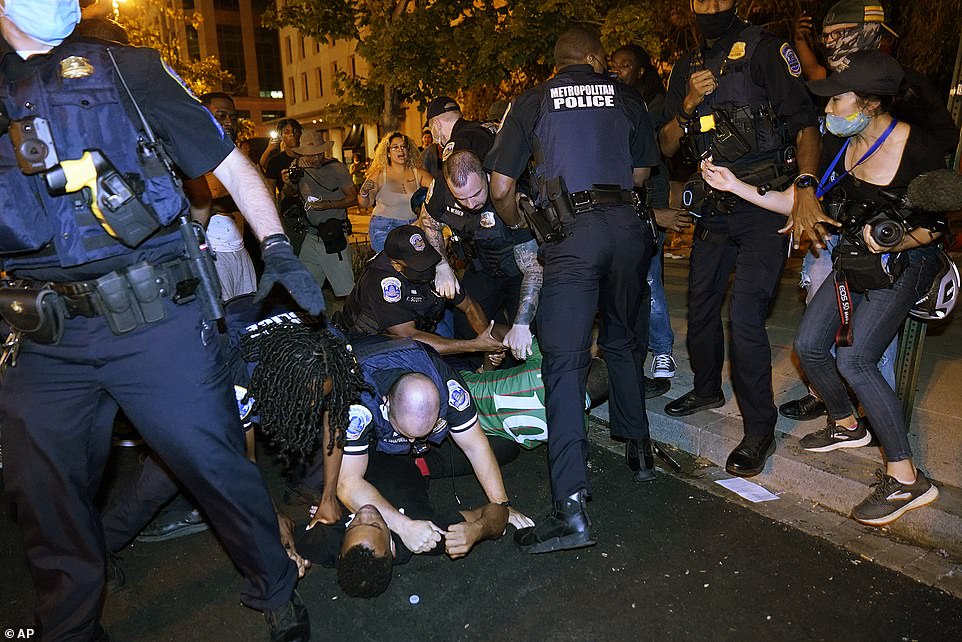 The demonstrations were peaceful at the start of the evening, but clashes with police officers ensued when the convention wrapped up. Officers pictured subduing a protester on the ground Thursday night

In one crowd of protesters a dance party broke out with EDM remixes of Go-Go and Mo-Town music bumping from speakers.

The demonstrations were peaceful at the start of the evening, but clashes with police officers ensued when the convention wrapped up.

There were several organized protests surrounding the White House on Thursday night.

Refuse Facism held a #TrumpPenceOutNow rally and The Party Majority PAC organized a #ThePeoplesHouse demonstration nearby.

The groups ShutdownDC and Long-Live Go-Go had put out word in advance about the planned ‘noise demonstration and dance party’ to coincide with Trump’s speech. 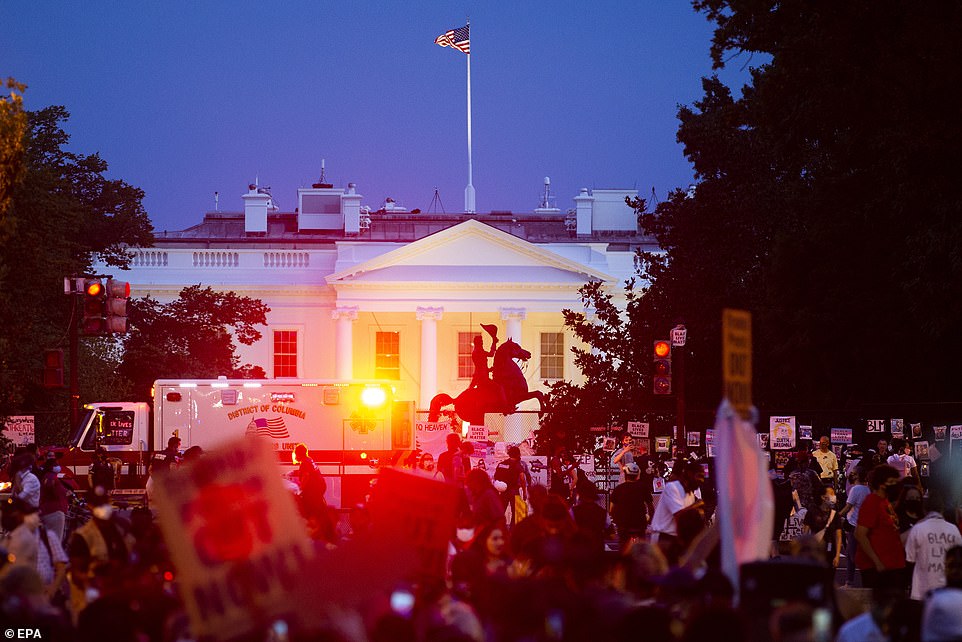 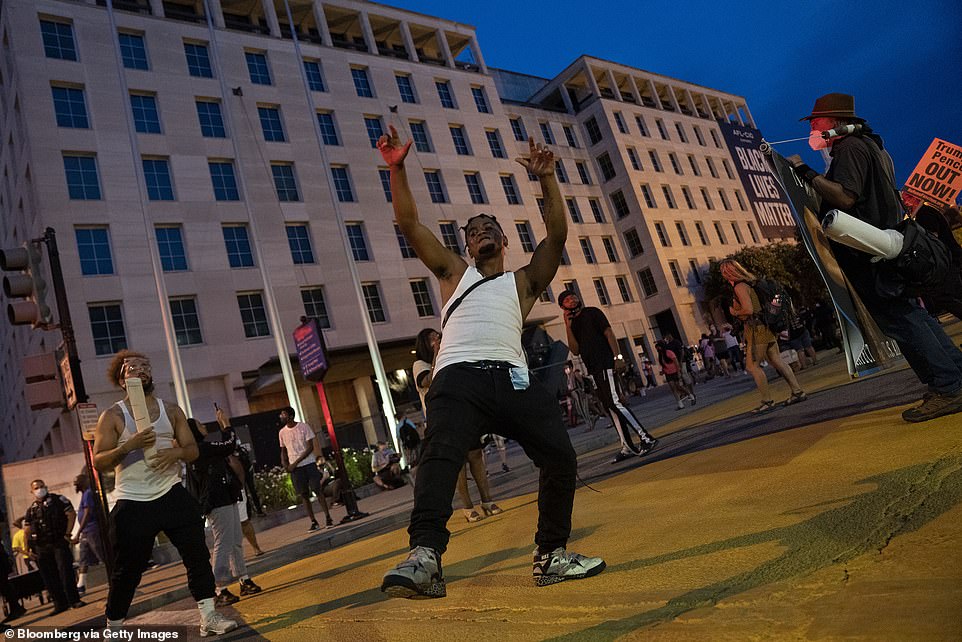 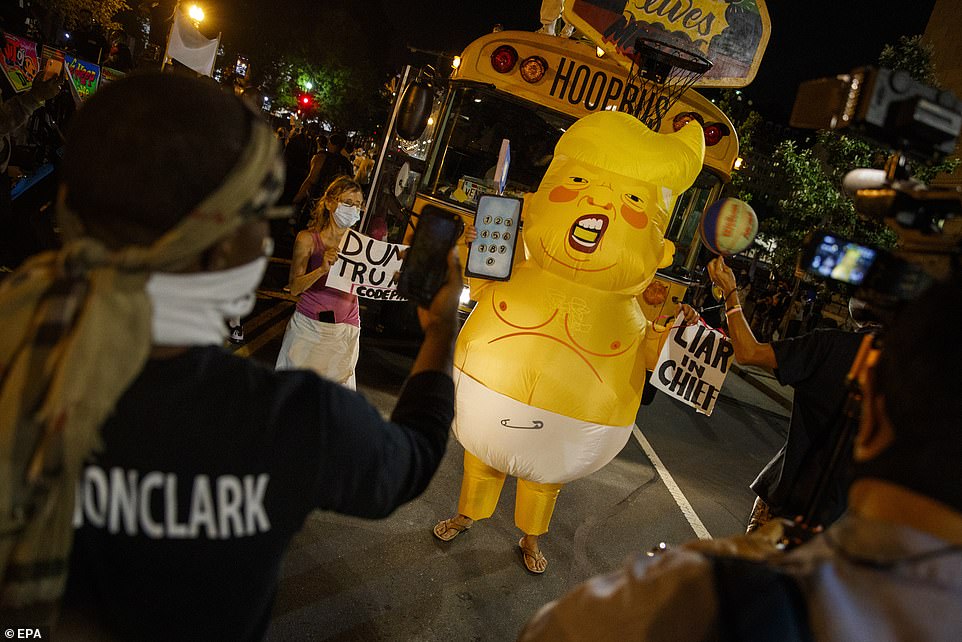 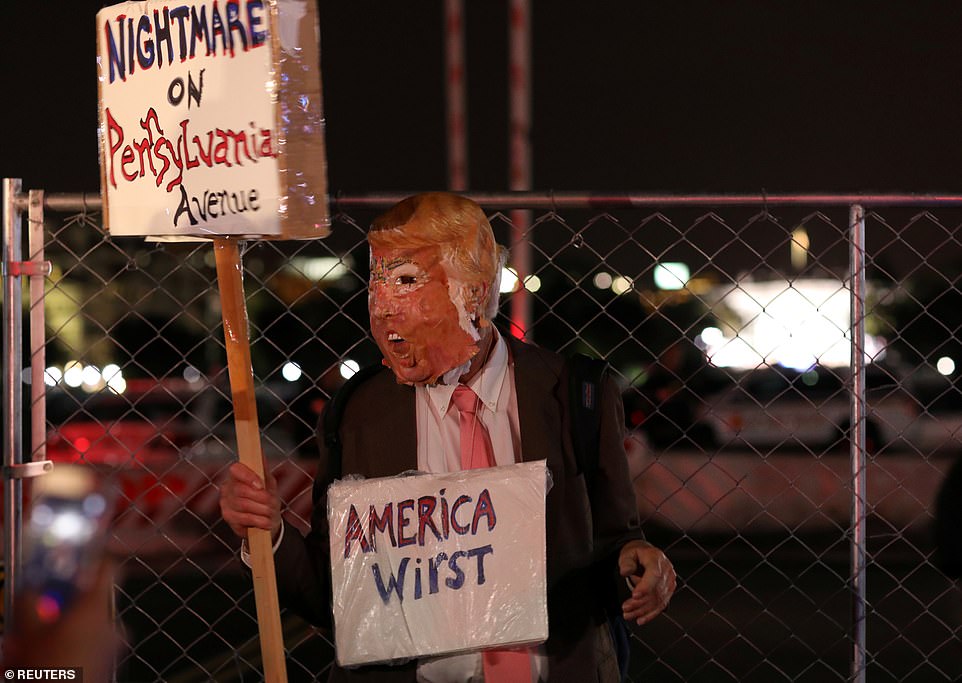 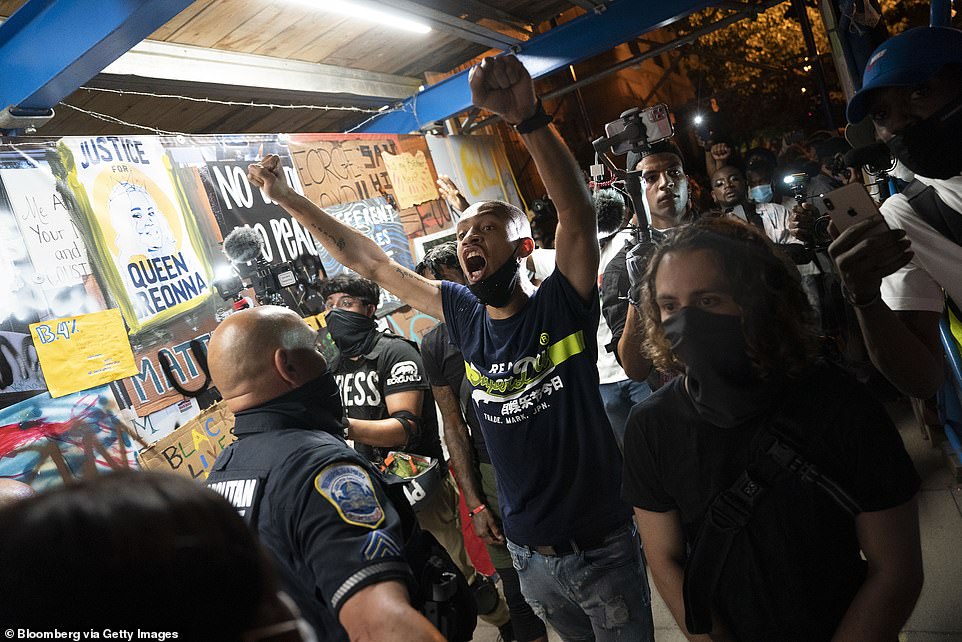 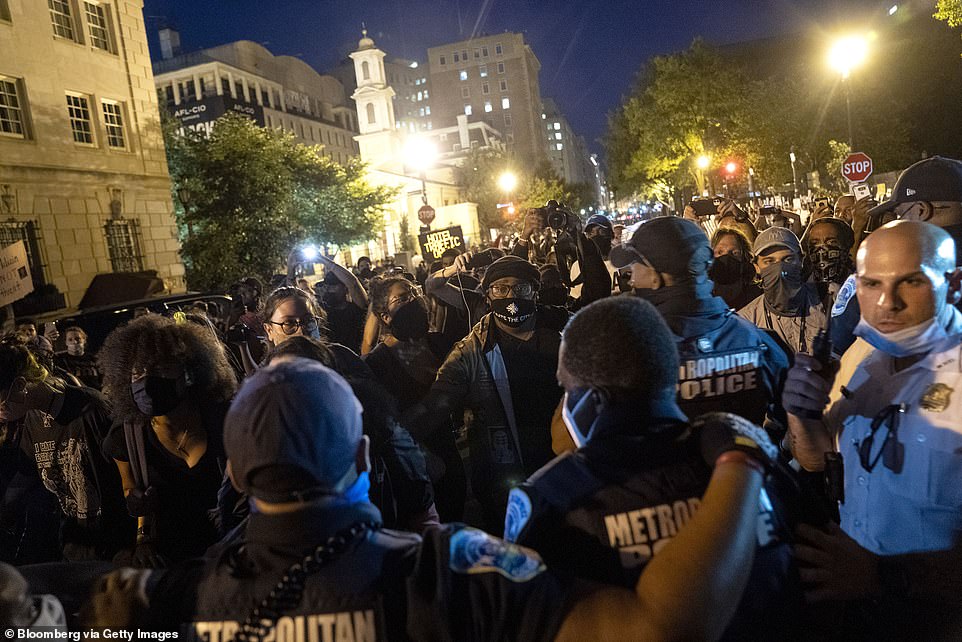 ‘You guys gotta get some rhythm,’ a protester told Secret Service officers.

‘Would you have rhythm if you were wearing 30 pounds of gear,’ one responded.

‘These presidents are not gonna do anything ’cause they are not the people of color in the streets being shot,’ a black student who travelled from Houston, Texas to take part in the protests said to AFP.

‘There are more people who are ready for Trump to leave office,’ Michael Legend, a 33-year-old black man from Washington said.

Nearby protesters set up a small guillotine, with the District of Columbia flag as the blade. 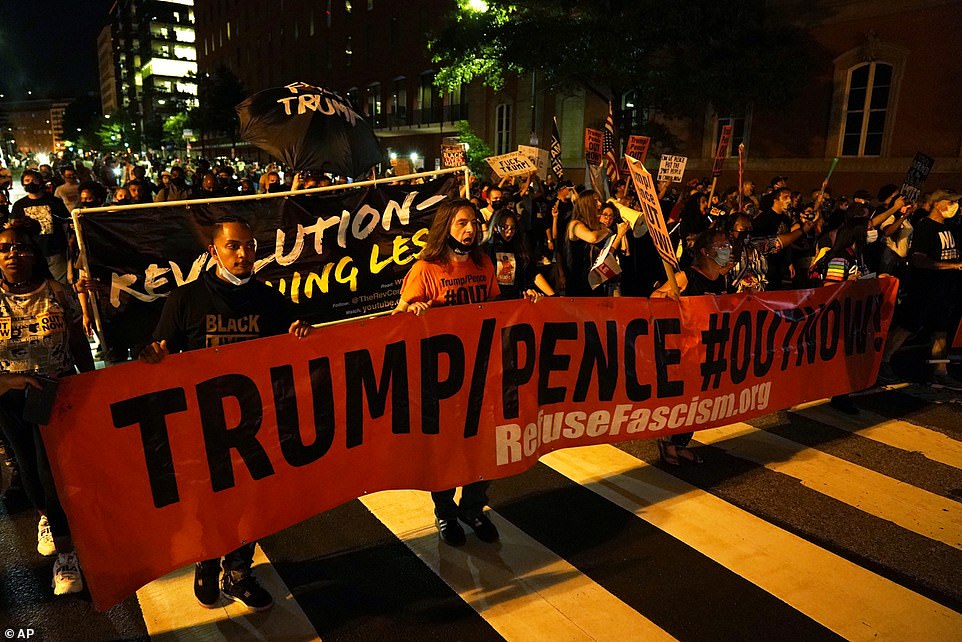 A massive group of protesters with Refuse Facism hold a rally and carry a banner that says ‘Trump/Pence #OutNow!’ near the White House on Thursday evening 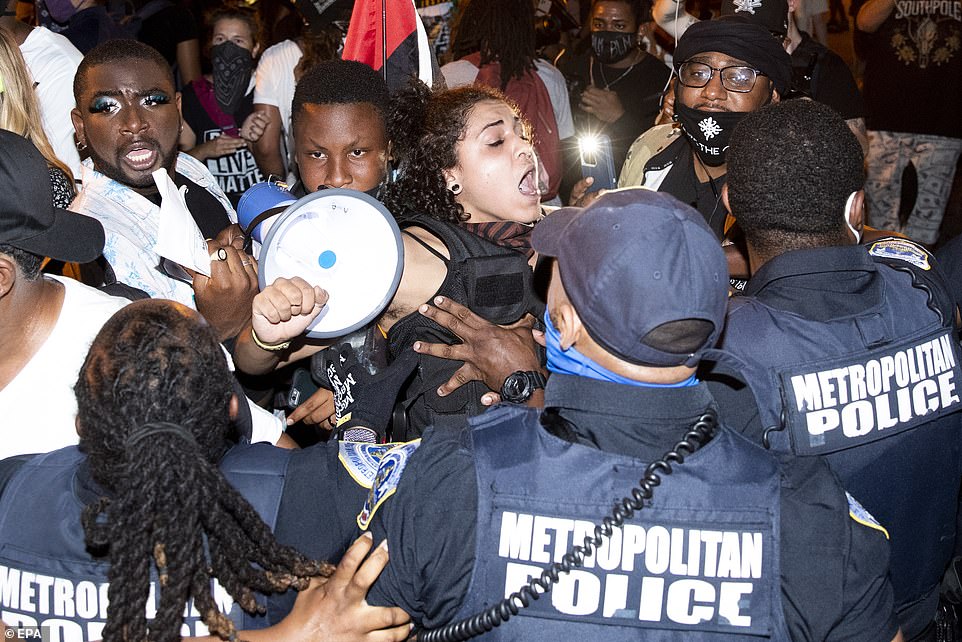 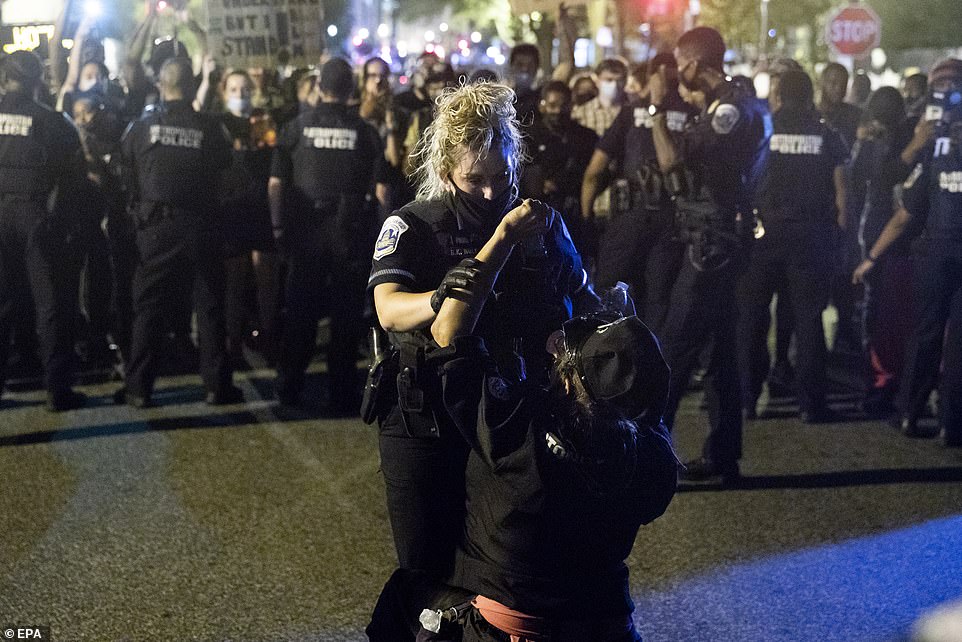 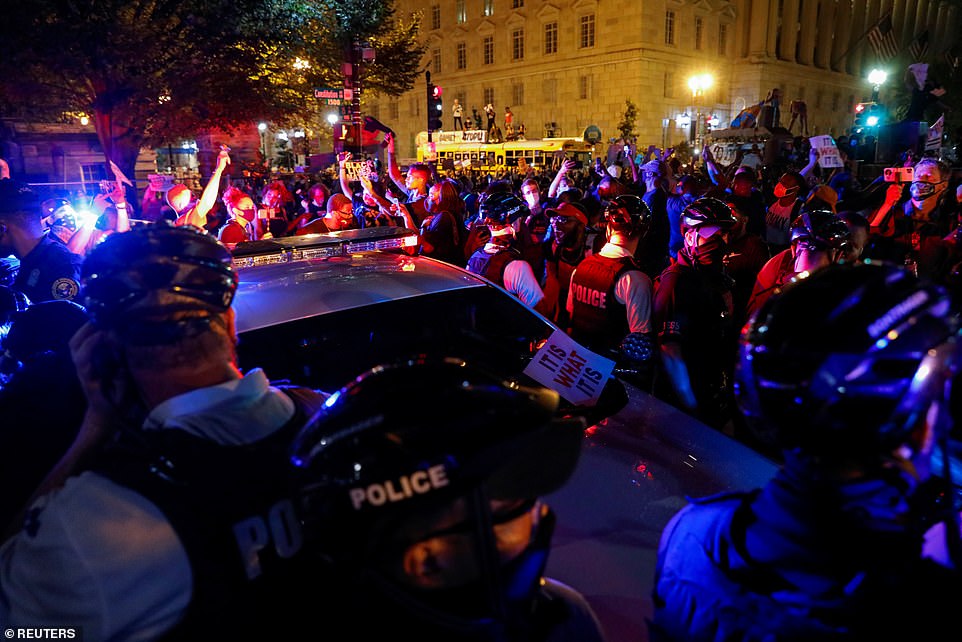 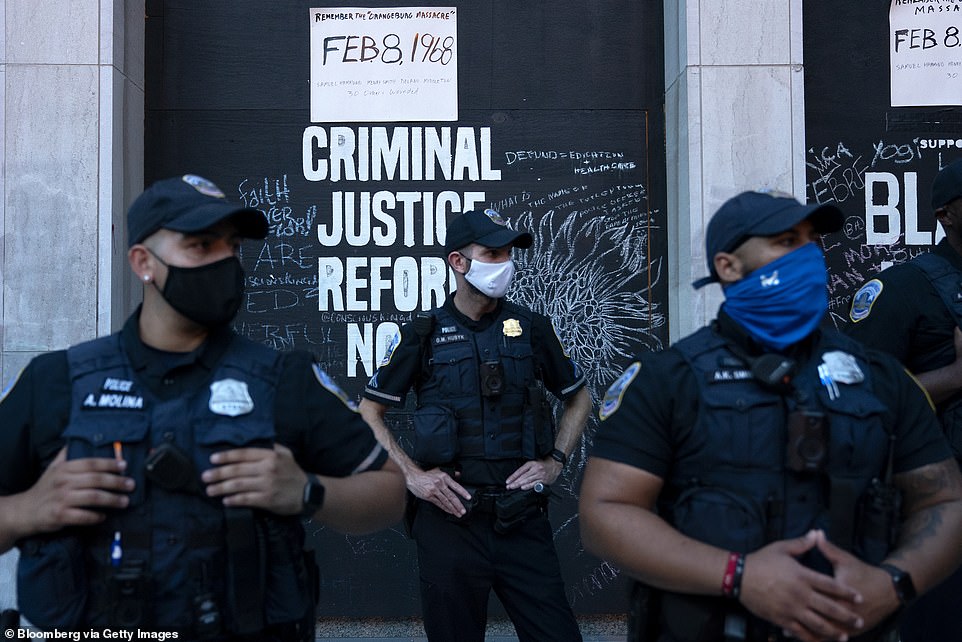 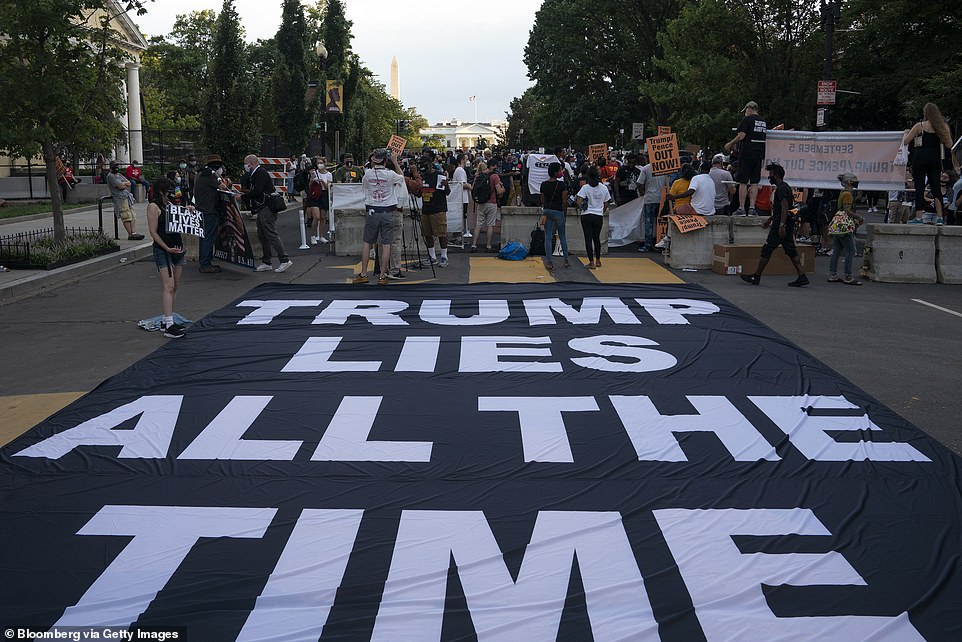 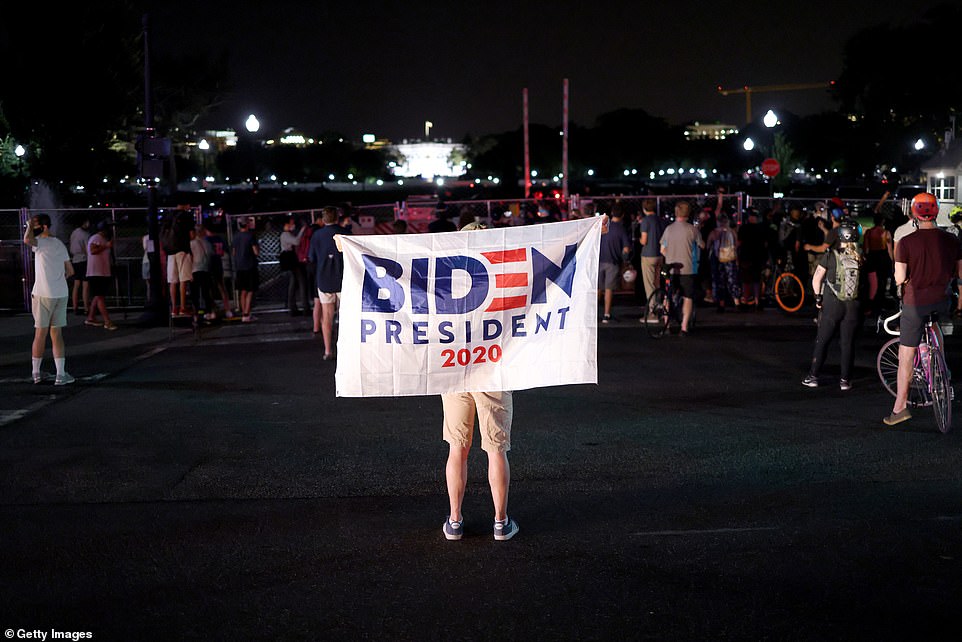 Lafayette Park, a traditional site of demonstrations across from the White House, was sealed off and there were some street closures.

National Black Lives Matter protests erupted in all 50 states in May following the police killing of black man George Floyd in Minnesota.

The outrage with the White House has only inflamed with the police shooting of Jacob Blake, 29, in Kenosha, Wisconsin in front of his three children on Sunday.

Blake survived the attack but has been left paralyzed from the waist down, according to his family’s lawyer.

Coronavirus: Campaign to encourage workers back to offices

UK coronavirus live: Shapps insists return to office is safe amid push to save town and city centres | World news