Dramatic dash cam footage emerged of a driver jumping out of his vehicle to rescue a child sitting in a runaway cart.

In the footage, a man drives his car through the parking lot of Albany Creek Village shopping center in Queensland.

It comes to an abrupt halt when an unattended cart, with a young boy in the child seat, rolls into the parking lot.

The driver gets out of his vehicle as the cart begins to pass the nose of his car.

He runs and manages to grab the handle of the cart before the cart heads further into the parking lot and picks up speed.

The man turns the cart around and seems to be looking for the child’s parents while consoling him.

He then pushes the cart back in the direction it came from while continuing to console the young boy.

Viewers of the dash cam footage expressed shock and amusement at the bizarre scene.

“That kid sliding around in the cart, wow, nice fellow citizen economy,” one said.

Another commented: “It’s great to see there are still good people in this world, the kid enjoyed his cart dash.” 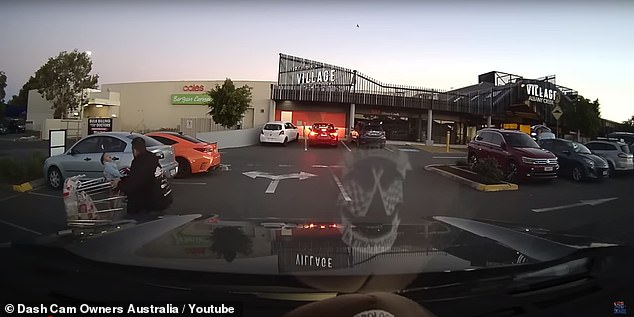 The dash cam owner quickly jumps out of his vehicle and manages to grab the handle of the cart before he heads further into the parking lot. He consoles the boy as he appears to be looking for his parent or guardian

Two respondents took a more serious approach to the situation, calling for a cart ban.

‘Good grief. I just hate carts in parking lots, I wish they would ban those damn things and make people carry their bags, or at least put some way in place to hold people accountable if they run off and damage the cars or are left in parking spaces! wrote one.

‘So many selfish fools don’t kick them out when they’re done with them..’

Another suggested supermarkets use CCTV cameras to ‘track who has trolleys and what they’re doing with them and then start issuing blanket parking bans’.

Biden says Austin Tice has been detained by Syria, calls for his release

From Mike Tyson to Muhammad Ali and Lennox Lewis, a heavyweight rematch story offers hope for Anthony Joshua in next fight with Oleksandr Usyk

How Melissa Etheridge Stopped a RHOBH Dinner Party From Hell