Peers will urge ministers to BAN smoking outside pubs, restaurants and cafes over health fears

Calls for smoking to be banned outside bars, restaurants and cafes over health fears have been slammed by angry pub owners and customers.

Ministers will face demands today to require pubs and cafes to ban outdoor smoking over fears of an increase risk of second hand smoke.

Peers are set to urge ministers to introduce the new rules as venues move tables outdoors amid the easing of lockdown measures.

However, the proposals have attracted criticism from the pub industry and customers on social media.

John-Joseph Woodiwiss, from the Launton Arms, in Launton, Oxfordshire said: ‘As a non smoker myself, I personally would welcome non smoking areas, but as a publican facing one of the worst challenges with Covid we’ve faced since the indoor smoking ban, this is not a welcome move and it seems some politicians simply do not understand pubs at all.’

Emma McClarkin, CEO of British Beer & Pub Association, agreed with the sentiment and added that the management of smoking areas should be left up to individual pubs.

She said: ‘We believe that it should be up to licensees to make the decision on whether smoking is permitted in their outside areas and if so how best to organise designated spaces.

‘Each publican knows their customers and their needs best and should be allowed the flexibility to meet these needs, especially at this challenging time.’

Smoking outside pubs, restaurants and cafes could be banned, with peers set to urge ministers to introduce new rules as venues move tables outdoors amid the easing of lockdown measures. Library image 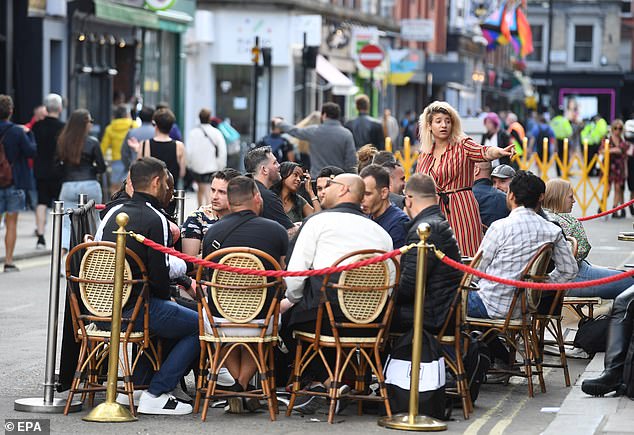 It comes as the government is temporarily relaxing licensing laws in Britain to allow pubs, cafes and restaurants to keep customers outside – where the risk of transmitting coronavirus is lower. Pictured: People eat and drink in bars and restaurants in Soho, London on July 5 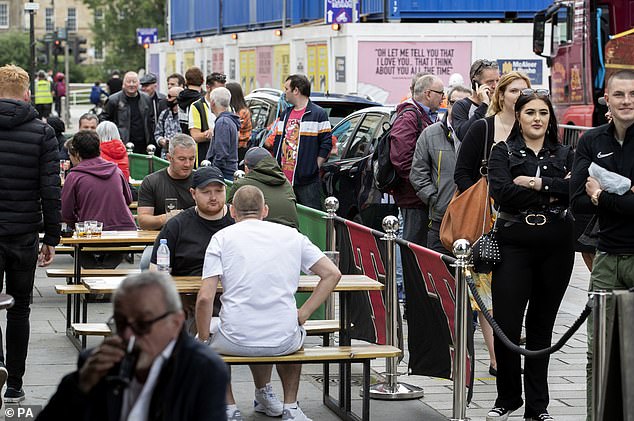 Some peers are now raising concerns that a push for more alfresco dinning could create a Continental-style ‘cafe culture’, and an increase of people smoking outside of cafes, bars and restaurants, according to the I newspaper. Pictured: Members of the public queue for a table as others enjoy their first drink in a beer garden at the Hootenanny, Glasgow

One Briton wrote on social media: ‘What is it with some politicians and their determination to decimate the economy and attack ordinary people?’

A second said: ‘Pubs will suffer for this. People are so damn precious about being offended by a bit of smoke.

‘Why can’t they just go into the pub quickly. People were never like this before smoking became an issue. The power of suggestion.’

A third added: ‘Where would this stop first we were stopped from smoking inside pubs n clubs (which I agree) but now they want to stop smoking outside pubs n clubs in the open air next theyll want to ban smoking altogether but isn’t that taking away our human rights.’

It comes as the government is temporarily relaxing licensing laws in Britain to allow pubs, cafes and restaurants to keep customers outside – where the risk of transmitting coronavirus is lower.

But some peers are now raising concerns that this could create a Continental-style ‘cafe culture’, and an increase of people smoking outside of cafes, bars and restaurants, according to the I newspaper.

The paper reports that peers, backed by health campaigners, are today set to challenge the government during a debate of their plans to rush through emergency planning regulations to encourage the hospitality industry to go al-fresco.

It comes amid concern by peers such as former Conservative cabinet minister Sir George Young and Liberal Democrat Baroness Northover.

She told the I: ‘Reducing smoking in public places has been hugely important for improving public health in the UK.

‘However, with pavement licences being introduced to help support our hospitality industry as we relax lockdown, the Government should not allow this to become an excuse for increasing smoking in public places.’ 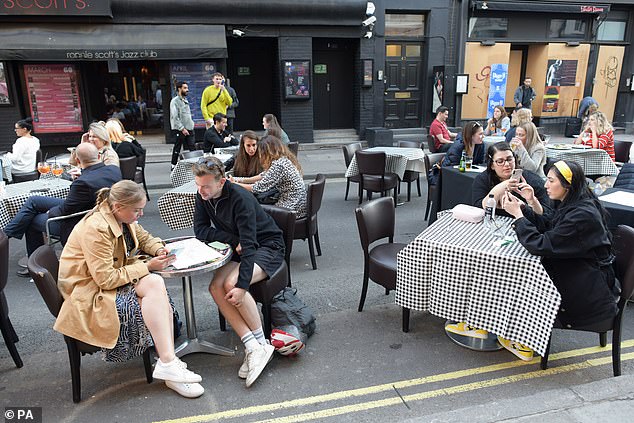 The concern comes after pubs, bars and restaurants were given the green light by the government to reopen this month after more than three months of closure due to lockdown. Pictured: People socialise in outdoor dinning areas in Soho, London 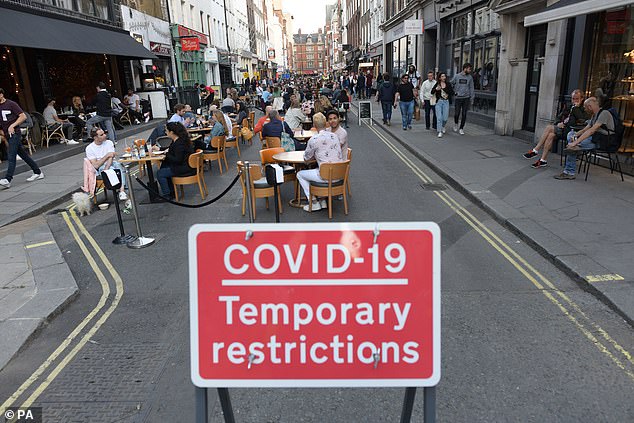 Streets have temporarily been closed in the evenings in parts of the West End, London, to encourage bars and restaurants to reopen

The concern comes after pubs, bars and restaurants were given the green light by the government to reopen this month after more than three months of closure due to the coronavirus lockdown.

Government scientists say the risk of spreading coronavirus is lower outside, leading to many bars, pubs and cafes moving their service outside to allow them to reopen while keeping customers safe.

Meanwhile London’s West End has been transformed into a ‘continental-style’ outdoor dining district this summer to prevent hundreds of pubs, restaurants and bars from going bust.

Areas most popular with tourists – including Covent Garden, Soho, Mayfair and Marylebone – were all part of the plans, which include extensive temporary road closures.

The closures are in place from 11am to 11pm in Covent Garden and 5pm to 11pm in Soho during the week and then from midday to 11pm on Saturdays.

The plans led to packed streets in Soho on July 4 when many pubs and bars reopened for the first time since lockdown was imposed in March.