The number of young children poisoned by eating their parents’ pot brownies has soared 320% to record highs.

Dr. Diane Calello, executive and medical director of the New Jersey Poison Control Center at Rutgers New Jersey Medical School, told DailyMail.com that she has seen a significant increase in the number of children exposed to cannabis in recent years.

A study published in the journal Pediatrics found a significant increase in the number of children under the age of 11 accidentally consuming cannabis edibles after legalization of marijuana in all 18 states, District of Columbia, Mariana Islands North and Guam.

Calello said that every time a drug or substance was made more available, there was an increased number of poisonings, “and when you make it as appealing as edible cannabis…”

Calello said the problem with edibles is that they look like candies or treats like brownies or cakes, which makes them irresistible to young children. A child was also likely to eat an entire ‘candy bar’ of edibles – which would be multiple doses. 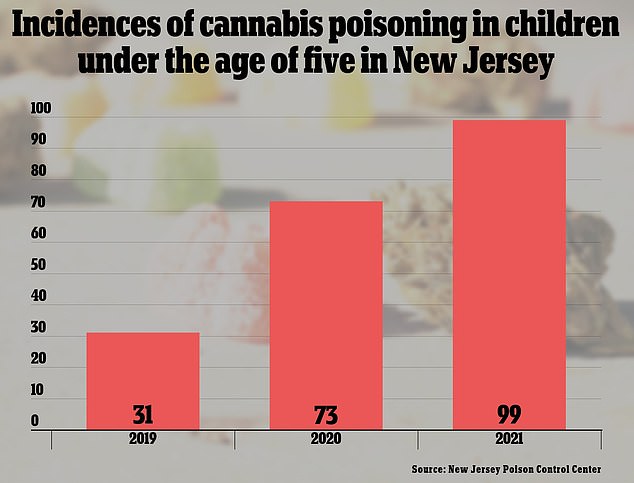 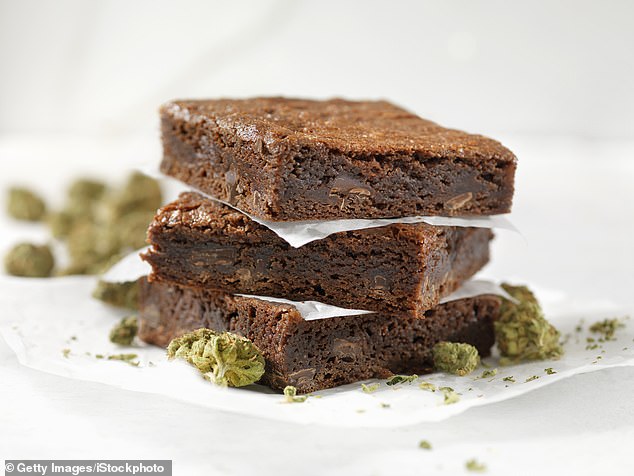 She said she’s seen a national and local trend of children being exposed to edibles after more states choose to legalize or decriminalize cannabis.

New Jersey voted to legalize marijuana in 2020, which saw police and residents soften their stance on the drug until it was finally enacted in February 2021.

CHILDREN FROM 6 TO 12 YEARS

“We saw a big jump (in poisonings) in 2020,” Calello said, adding that more people being home and trying to ease their anxiety during the pandemic shutdowns could also have affected the numbers.

New Jersey Poison Control’s medical director also dismissed the idea that weed was harmless and the myth that someone can’t overdose on marijuana.

“It can be dangerous for a child,” she told us. “Seizures in adults are extremely rare, but in children they need much less to get very sick.”

Calello added that she personally cared for a child who had a seizure due to a cannabis overdose and another who needed to be on a ventilator.

Even mild symptoms can be extremely distressing for a young child.

In 2021, the New Jersey Poison Control Center assisted in the treatment of 150 children – including 99 under the age of five – who ate cannabis edibles. 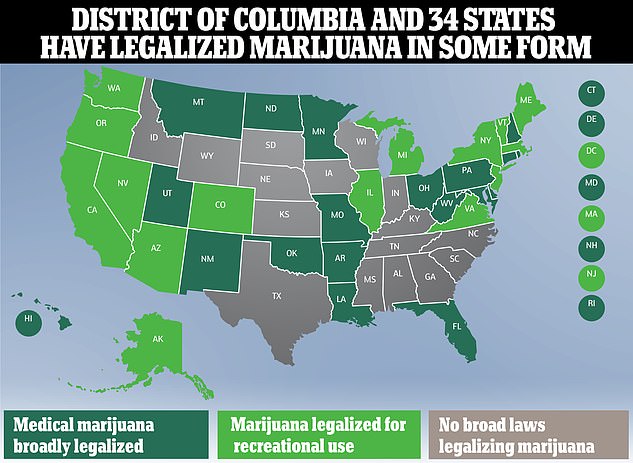 34 states and Washington DC have legalized marijuana in one form or another, including recreational use, medical use, and sale

For the under-five age group, cases rose from 957 in 2019 to 2,119 in 2020, according to data from the American Association of Poison Control Centers.

In total, more than 3,000 children required treatment for cannabis exposure in 2020.

“We certainly have no shortage of kids getting into their parents’ marijuana products. These are usually children between the ages of 2 and 6. It’s almost always edibles in the shape of brownies or cookies or other things kids might reasonably think are good to eat,’ said Dr. Eric Lavonas, a toxicologist at Rocky Mountain Poison and Drug Safety at Denver, to US News. 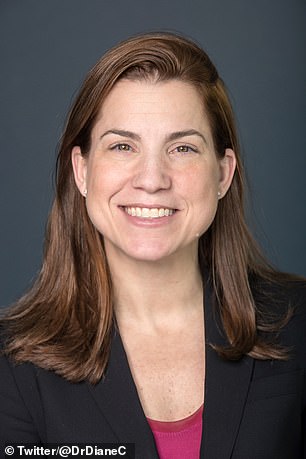 “Children will arrive very altered and unable to communicate with their surroundings, often vomiting,” he said. “The biggest danger is making sure it’s not something else and that the child doesn’t get dehydrated.”

Even in states that have yet to legalize cannabis, American attitudes toward the drug and its availability thanks to states that have legalized or decriminalized it mean that access is wider than ever.

According to a new survey, more than 90% of Americans now think marijuana should be legal in some form, and nearly two-thirds say they support legalizing both medicinal and recreational use.

According to the study by the Pew Research Center, less than one in ten – or 8% – said that smoking marijuana should not be legal.

The poll was taken after Virginia and New York took steps to legalize marijuana last year.

Calello recommends locking up marijuana products and avoiding those packaged with cartoon characters and bright colors that might attract children. 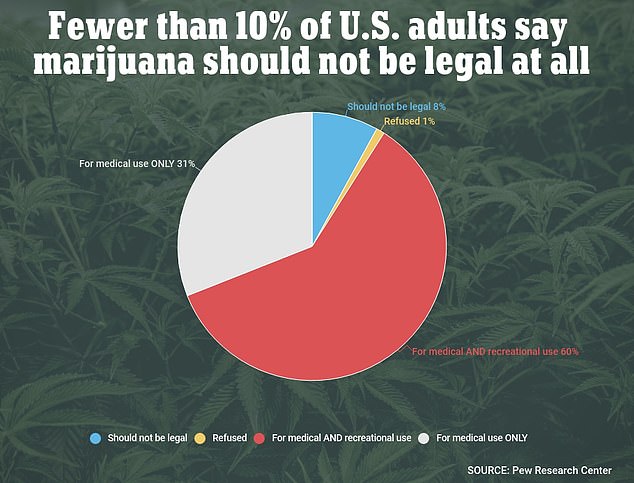 More than 90% of Americans now think marijuana should be legal in some form, with nearly two-thirds saying they support legalizing both medical and recreational use, a poll has found. 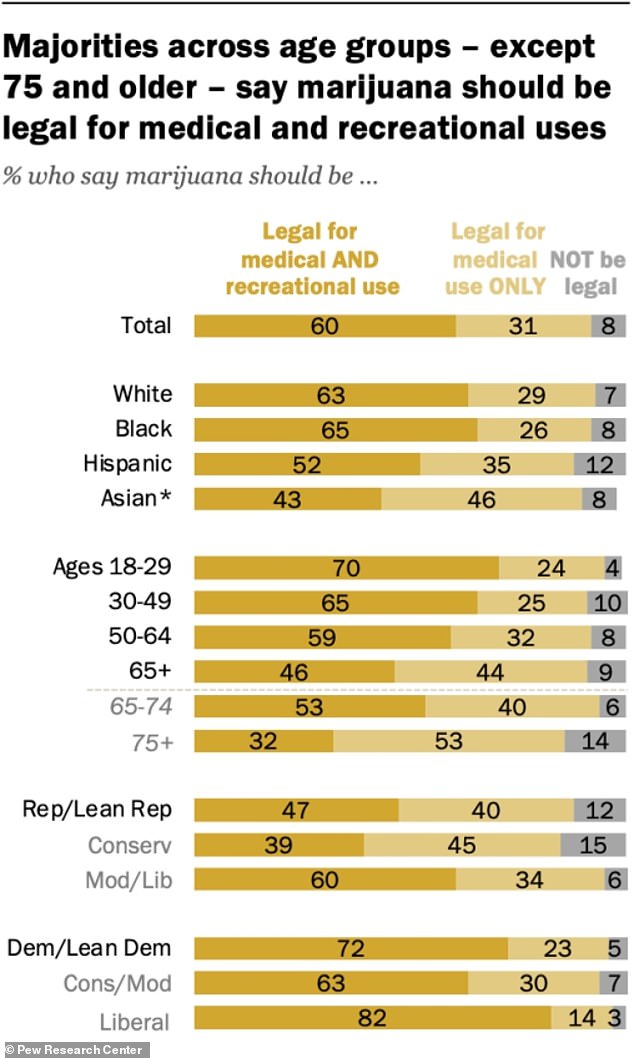 GOP threatens to release Jan. 5 footage — but getting it will cost them

Everything we know about Trevor Bauer’s MLB grievance hearing

Boris Bondarev, a Russian diplomat, speaks out on the war

At Geneva meeting, India expresses disappointment with WHO report on excess mortality