Two sports stars who have signed deals with Kanye West’s marketing firm announced on Tuesday they were cutting ties with the troubled rapper – the latest to abandon him following his anti-Semitic speech.

Aaron Donald, who plays football for the Los Angeles Rams, and NBA star Jaylen Brown, with the Boston Celtics, said they could no longer be part of West’s company, Donda Sports.

They followed Adidas, Gap, Balenciaga, Vogue and Foot Locker in ending their deals with West.

On Oct. 9, West tweeted that he would be going “death con 3” on “JEWISH PEOPLE,” an apparent reference to Defcon, the US military defense readiness system.

His Twitter and Instagram accounts were blocked in response, but the 45-year-old was unrepentant, refusing in several interviews to apologize.

On Monday, West’s ex-wife Kim Kardashian tweeted, “Hate speech is never acceptable or excusable.” I stand with the Jewish community and call for an immediate end to the terrible violence and hateful rhetoric against them.

That same day, West gave a lengthy podcast interview reiterating his condemnation of “Jewish people” for much of society’s ills and his own personal trauma.

Yet on Tuesday, former NFL player Antonio Brown – who is on staff at Donda Sports – defended West and said he would stand by him. 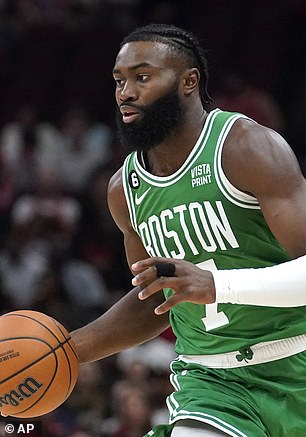 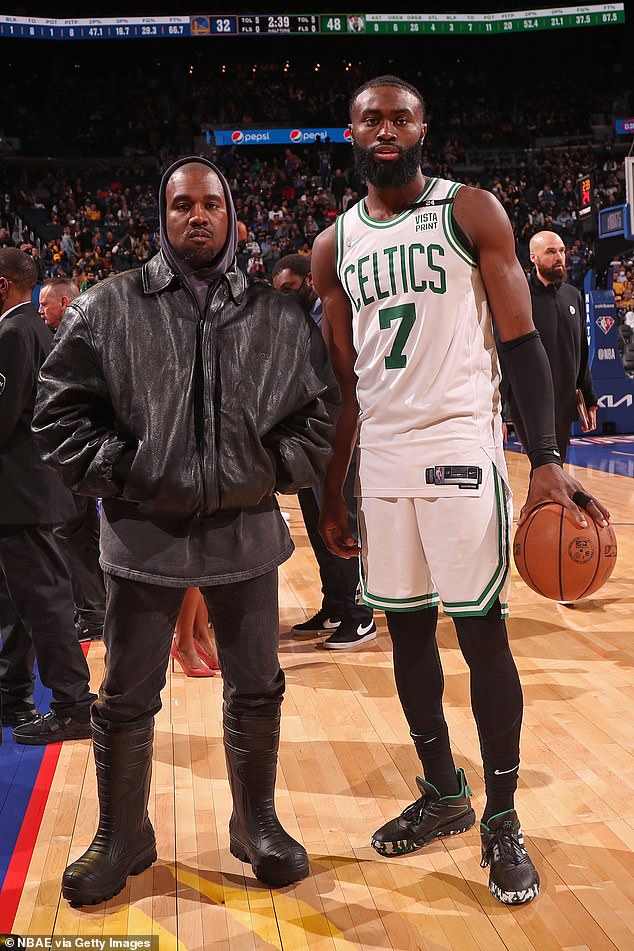 Antonio Brown, who was recently ordered by a court to pay $1.2million in damages to a truck driver he assaulted in 2020, said: “The people and brands who have relentlessly profited black ideas and black culture chose to distance themselves at a very specific time: a time that demonstrated their prioritization of certain groups over others.

He added, “None of us in this world are free from judgment, but we live in a time when scrutiny and pessimism have pushed our dialogues on cultural issues into rants.”

He said he thought West’s anti-Semitism had been taken “out of proportion” by the media.

Donald, 31, joined Donda Sports in May – the first and only NFL player to sign with the rapper’s sports marketing company.

On Tuesday, he released a co-signed statement with his wife Erica explaining why they decided to walk away – without mentioning West by name.

“Recent comments and displays of hate and anti-Semitism are the exact opposite of how we choose to live our lives and raise our children,” they said.

“We find them irresponsible and go against everything we believe in as a family.

“As parents and members of society, we felt responsible to send a clear message that hateful words and actions have consequences and that we need to do better as human beings.

“We do not believe that our beliefs, voices and actions belong in a space that distorts and oppresses people of any background, ethnicity or race.”

Brown, 26, who talks about the importance of education and uplifting marginalized communities, then followed suit. 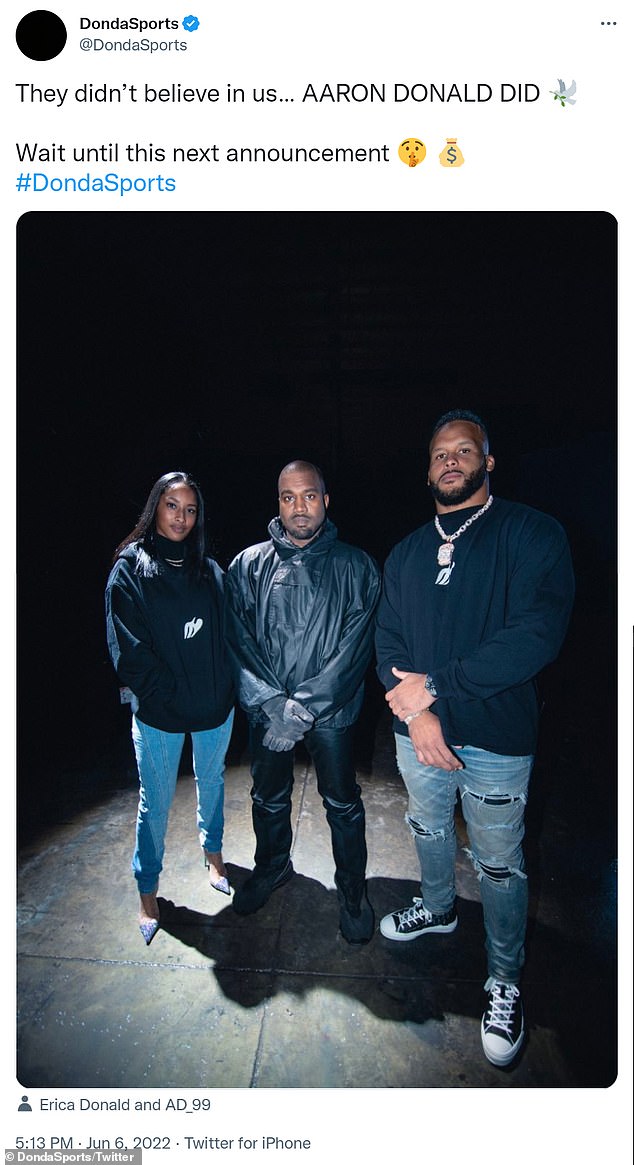 Donald joined in May and the news was announced in June 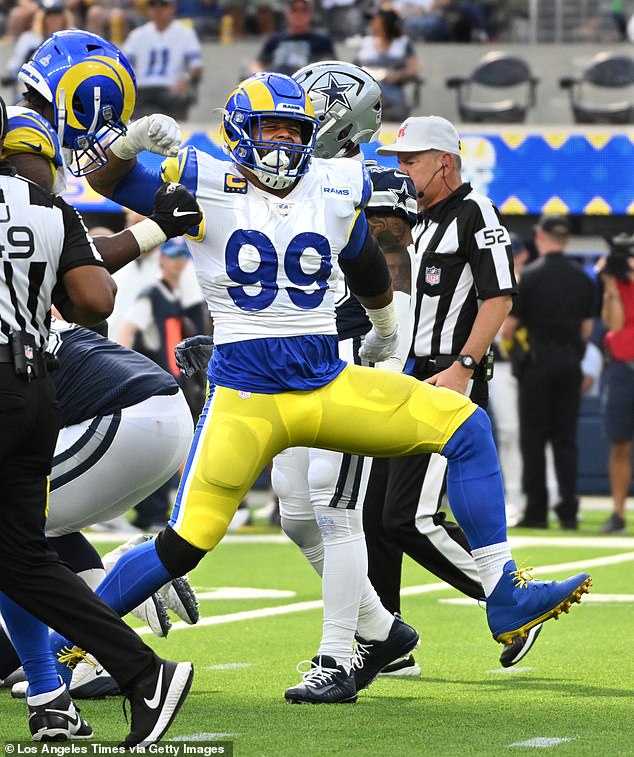 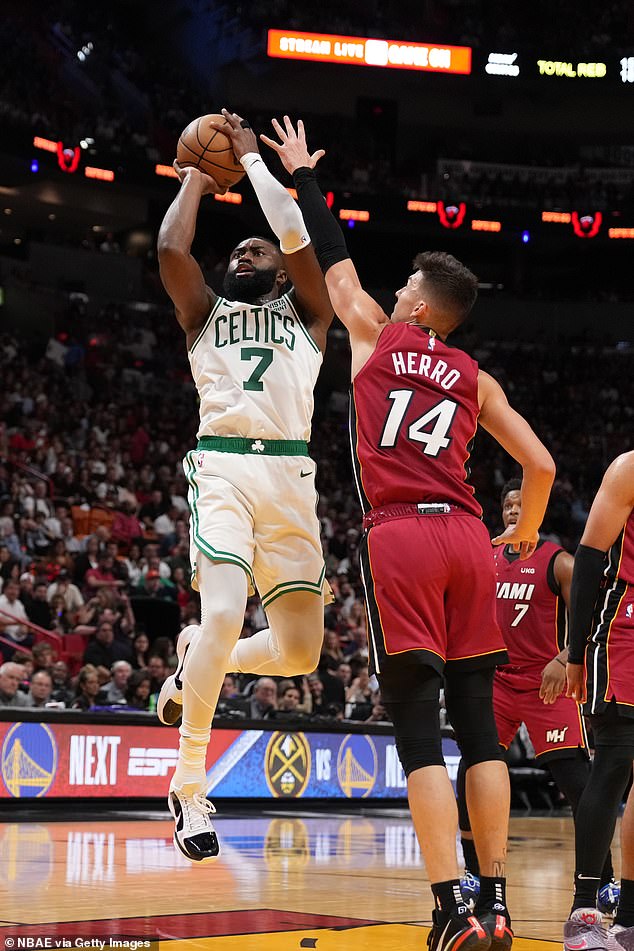 “It represented single-parent households, and a lot more people are involved in something like that.”

On Tuesday, Brown said he had thought about the matter and changed his mind.

“Over the past 24 hours, I have been able to reflect and better understand how my previous statements lack clarity in expressing my position against recent insensitive public remarks and actions,” Brown wrote on Twitter.

‘For that, I apologize. And in that, I try to be as clear as possible.

“I have always, and will always continue to stand firmly against all anti-Semitism, hate speech, misrepresentation and oppressive rhetoric of any kind.

“In light of this, after sharing conversations, I now recognize that there are times when my voice and my position cannot coexist in spaces that do not align with my position or my values.

“And, for this reason, I am ending my association with Donda Sports.”

On Monday, West doubled down on his wild and deeply offensive rhetoric in a two-hour, 26-minute interview with podcast host Lex Fridman, a Russian-American computer scientist who is also Jewish. 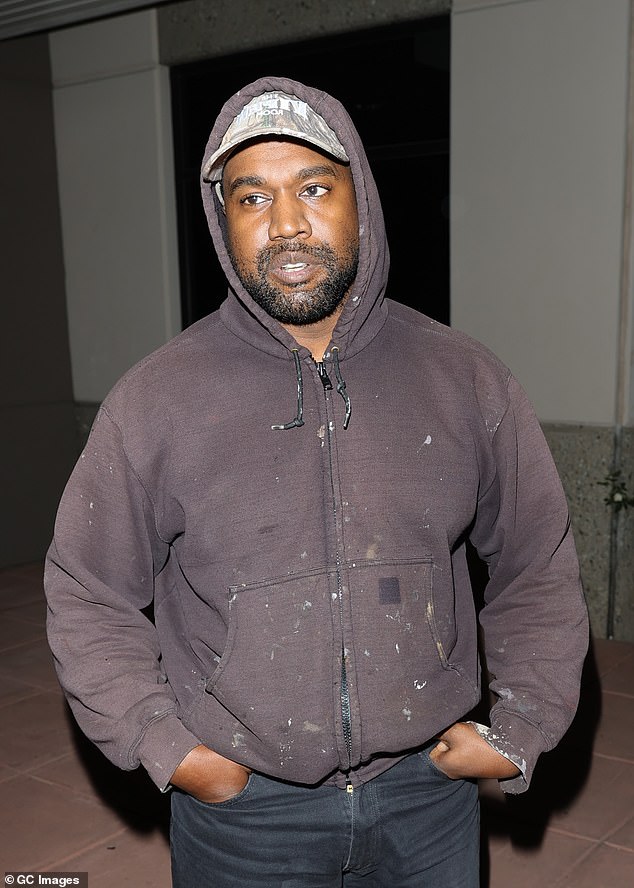 West is pictured on October 21 in Los Angeles

“It’s not racism; it is too broad a term. It is the genocide and population control that black people are in today in America, that are promoted by the music and media that black people make, that Jewish record labels get paid for.

Fridman challenged West over his claim to Jewish control of media and industry.

“I grew up in the Soviet Union,” Fridman said.

“I’m Jewish, my family members perished in the Holocaust of Nazi Germany, I have to push back. When you say ‘Jewish media’, there’s an echo of pain that people feel.

West replied: ‘You’re saying it’s redundant, aren’t you. If the Jews accepted that I was Jewish, they would understand it in a different way.

Fridman said, “The right thing to do is not to say there is Jewish control over the media.”

West shouted, “That’s wrong though!” It’s a fucking lie. There are. And did they come and bully me and prove the point.

West poked fun at Kardashian for her ancestry, saying, “Some people just have high DNA.” Ivanka Trump has high DNA.

He then returned to his anti-Semitic themes, saying billionaire philanthropist and progressive George Soros would “use black trauma economics to win an election.”

West claimed that his own mental health disorder was the result of a Jewish conspiracy.

Fridman replied, “Why do you keep saying Jewish?”

West said, “Because they were. He diagnosed me with bipolar disorder and injected me with medication. So put it in the press.

Russia rejects $60-a-barrel cap on its oil, warns against cuts – The Denver Post

Walker ‘one of the worst candidates’ in GOP history