The new chancellor may be a renowned mastermind with a doctorate in economic history from the University of Cambridge.

But Kwasi Kwarteng doesn’t always have the answers. When he appeared on University Challenge in 1995, he buzzed in response to a donkey question, only to tell quiz master Jeremy Paxman, “Oh fuck, I forgot.”

As if that wasn’t bad enough the first time around, after racking his brains, he added, “Oh f***,” again.

The clumsy BBC producers failed to notice the 19-year-old classical student’s muttered expletives, and they were broadcast across the country.

But undergraduate Mr Kwarteng had the last laugh as his team from Trinity College, Cambridge won all stages and went on to be crowned the 1995 University Challenge champions.

He hopes his winning streak will continue – after Liz Truss nominated him to the Treasury under some of the toughest economic conditions in living memory.

Neighbours: New Chancellor Kwasi Kwarteng is a close friend of Liz Truss, so close he lives 300 yards away in Greenwich

Although not widely known to the public, the 47-year-old MP for Spelthorne, Surrey has a strong academic background.

At 6ft 5in, Mr. Kwarteng is a physically and intellectually powerhouse. He was born in east London in 1975, the only child of lawyer mother Charlotte and economist father Alfred, Ghanaian migrants who came to the country as students in the 1960s.

He went to a state primary school in Waltham Forest before transferring to private Colet Court Preparatory School and then gaining a scholarship to Eton, where he was considered one of its brightest pupils.

He speaks German, Greek and French and writes poetry in Latin. A friend recalled how when the school introduced Italian into the curriculum, “the teachers were trying to teach rudimentary Italian but Kwasi learned the whole language – the teachers had a hard time keeping up with him”.

Like Boris Johnson, who attended Eton a decade earlier, Mr Kwarteng shone at the Wall Game, a hybrid of football and rugby, where he played First Wall, described by one Etonian as “an almost suicidal position which involved to spend much of the game having his head rubbed against the brick”.

And also like Mr Johnson – of whom he is a long-time supporter – he won Eton’s Newcastle Scholarship award for excelling in a series of written exams.

He was a prefect at school and is said to still be held up as an example of how to succeed in Oxbridge interviews.

He excelled at Cambridge where friends described him as “extremely confident, but not arrogant”. One said he ‘had quite a few girlfriends – he had some catching up to do after raising his boys in a private school’. 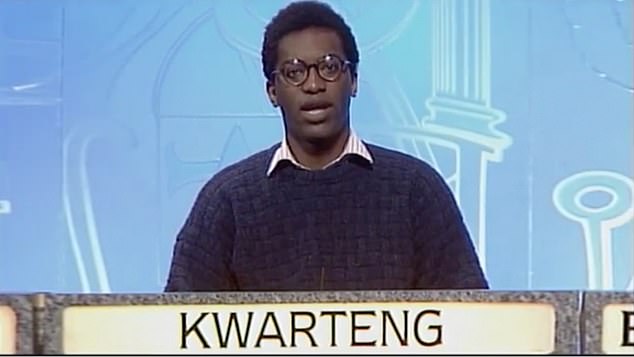 Brainbox: On University Challenge in 1995, when he swore on TV

Professor Tim Whitmarsh, who taught him Latin and Greek, was quoted as describing him as ‘a bit of a young mist’, saying: ‘I once saw a 19-year-old Kwasi in a brown tweed suit walking around with a pipe in his mouth on a hot day. After earning double firsts in classics and history, he won a Kennedy Fellowship at Harvard University, then returned to Cambridge for his doctorate in economic history.

Among the other three panelists on his college challenge team, Sean Blanchflower earned a doctorate in math and became vice president of engineering at a major software company.

Trinity team captain Robin Bhattacharyya, another mathematician, went on to teach math at a private school, while fourth member Erik Gray is now a professor of English and Comparative Literature at Columbia University. from New York. Mr Kwarteng too “is fundamentally an academic”, said a friend from the university. He maintains his interest in history and was recently spotted on a flight reading a book on Bismarck.

But he was also committed to a political career and, after a stint as a JP Morgan fund manager, he became the Tory MP for Spelthorne in 2010, at the start of David Cameron’s term.

Now they are also neighbors in Downing Street.

At one point Mr Kwarteng was dating Amber Rudd, the Conservative former home secretary, but the couple split.

He then met Harriet Edwards, 36, a former student of Cheltenham Ladies’ College and now a top-flight corporate lawyer who specializes in advising private clients on estate planning.

The couple married in 2019 and have a baby girl, Ida, who was born last year. 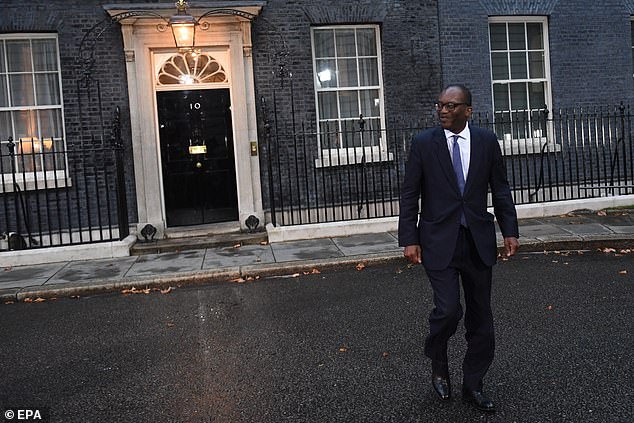 Kwasi Kwarteng, who has been appointed Chancellor of the Exchequer, leaves Downing Street on Tuesday. New Prime Minister Liz Truss is assembling a new Cabinet

A friend who has known the pair for a long time was quoted in another profile as saying Miss Edwards had ‘stabilized’ her husband and ‘gave him a family life he didn’t have’ before they met. Shortly after moving into their £1.74million villa with its large rear garden and leafy pergola, the couple got in touch with Greenwich planning officials.

They had the masonry on the front of the house cleaned by a professional without obtaining prior authorization.

The council said it had received a complaint alleging “criminal” damage to the Grade II listed property.

But after an investigation, a conservation officer sided with the couple, praising them for sensitively restoring the stonework to its original Victorian color.

He was called up to the Department for Exiting the European Union but quickly became a key member of Boris Johnson’s government, taking his place at the Cabinet table in 2021 as Business Secretary.

Said to be a “pragmatist rather than an ideologue”, the free trader’s cabinet minister reportedly boasts a large whiteboard scribbled on with the letters “MSH”, meaning “do some shit”.

With the multiple challenges facing the new chancellor, it’s a mantra that could serve him well.

Not all news on the site expresses the point of view of the site, but we transmit this news automatically and translate it through programmatic technology on the site and not from a human editor.
Tags
challenge Chancellor Dropped Fbomb Kwarteng Kwasi Latin poetry University writes
Facebook Twitter LinkedIn Tumblr Pinterest Reddit VKontakte Odnoklassniki Pocket