CES isn’t as consumer-focused as it once was, despite the overt branding. (CES stands for “Consumer Electronics Show.”) Indeed, automotive and enterprise suppliers have encroached on the Las Vegas show in recent years as some major consumer brands pull out. But fortunately, there is still news about consumer technology. Case in point: Nanoleaf, the brand behind the iconic geometric wall-mounted LED lighting, is showcasing a range of products this week to showcase its latest technical innovations.

The first is the Sense+ Controls, which Nanoleaf calls its first “learning smart light switches.” The range of devices – which includes the wired smart light switch, wireless smart light switch and Nala learning bridge – work with Matter, the smart home interoperability protocol, and run on the thread low-power mesh networking standard. All three Sense+ Controls products feature motion and ambient light sensors to automate routines, while the Nala Learning Bridge, which connects Thread devices including Nanoleaf, to Wi-Fi or Ethernet, works as a night light color changing with a soft glow.

Nala, a smart assistant who attempts to learn preferences for how a person uses and programs Nanoleaf products around the home, is perhaps the real star of the show when it comes to Sense+ Controls. Running on the Nala Learning Bridge or an existing Nanoleaf Thread Edge Router (provided via a free firmware update), Nala creates custom automations and attempts to handle certain actions informed by its learnings, such as turning off the lights , adjust brightness and color, and choose lighting scenes.

“We wanted to push the boundaries of what a ‘smarter’ home can look like. With apps and voice commands, the smart home is still very much based on manual controls and hasn’t reached its full potential of what intelligence can be,” Gimmy Chu, CEO of Nanoleaf, told TechCrunch in an email interview. “Combined with the vision of a hands-free smart home, we wanted to pair that with a user-friendly and relatable smart lighting assistant, which is where Nala was born.”

Nanoleaf is certainly not the first to attempt to inject intelligence and proactivity into the smart home. Amazon has long demonstrated Alexa’s “ambient intelligence” capabilities, while Google has dipped its toes in space many times over the years. Nanoleaf doesn’t claim that Nala is the best smart home attempt yet. But he is claiming that because Nala’s control is strictly limited to lighting, the wizard is more likely to behave in a desirable way. In other words, there are fewer things that can go wrong.

“Nala creates smart automations for your home that can be set to appear as suggestions or automatically applied to your lighting,” Chu said. “Nala’s learning capabilities become more intelligent and accurate with the amount of sensors in the space. Each smart light switch will help Nala learn better and provide more accurate predictive actions such as on and off , seamless brightness adjustments, scene selection, and more.

Beyond the Nala and Sense+ controls, Nanoleaf has unveiled Nanoleaf 4D, an ambient (and Matter-enabled) backlight kit for large-screen TVs. Similar to AmbiVision and other similar systems, Nanoleaf 4D relies on an LED light strip and a camera to record what’s happening on the screen and “expand” the image by illuminating the corresponding LEDs. Nanoleaf 4D offers four screen modes, with 50 addressable zones on the five-meter light strip, and comes with snap-on brackets as well as adhesives for easy installation (in theory). 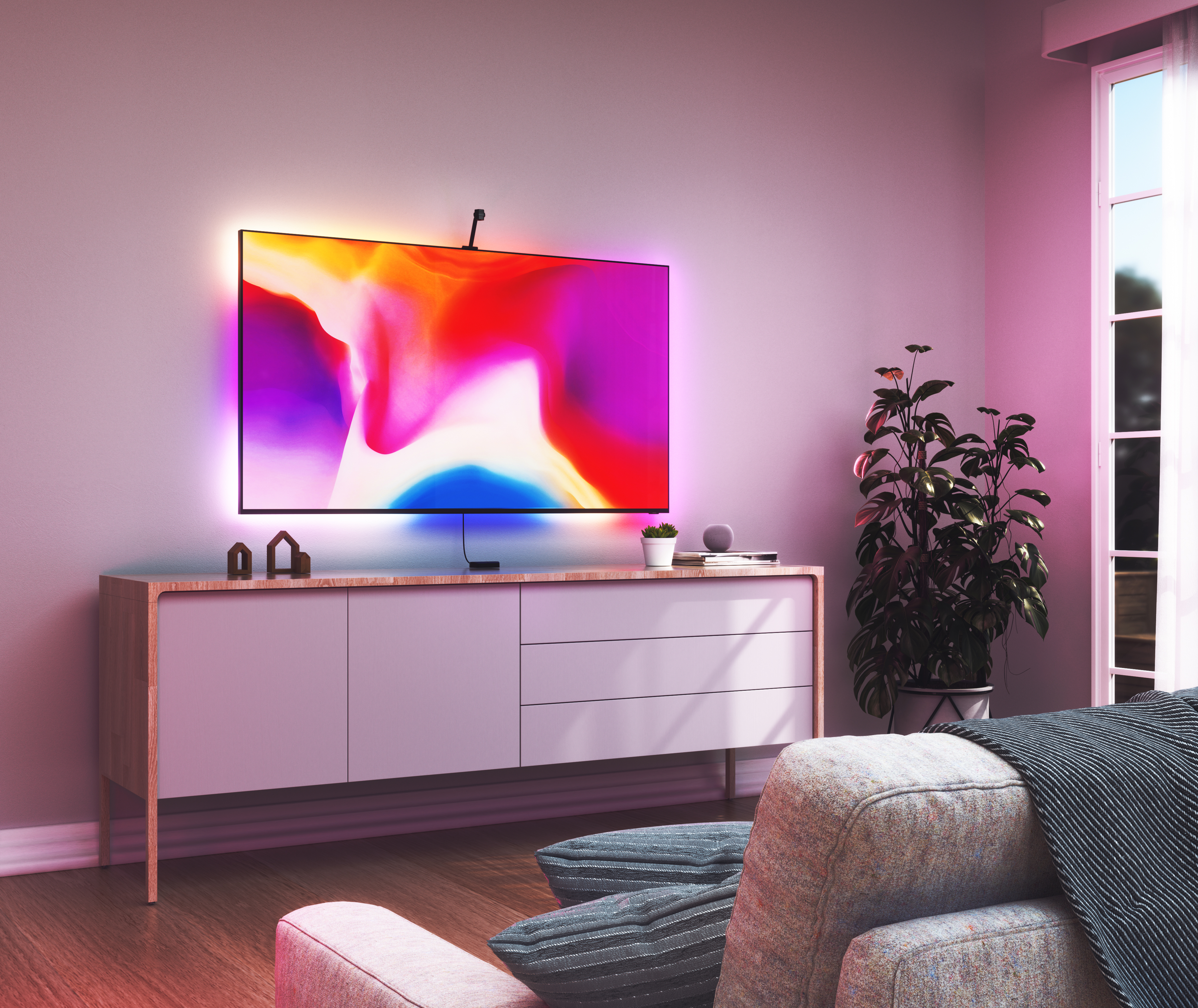 Nanoleaf 4D. Note the camera positioned above the TV, which records content to be reflected on rear-mounted LEDs. A console below processes incoming images. Picture credits: Nanosheet

Nanoleaf 4D is also the first to ship with Nanoleaf’s Sync+ technology, which syncs it with other Nanoleaf products on the same network. Sync+ can mirror what’s on screen on both Nanoleaf 4D and other Nanoleaf fixtures, and it can additionally synchronize colors and animations so that a single scene plays continuously in a room.

Not to be outdone (and clearly firing on all cylinders), Nanoleaf has announced the Nanoleaf Skylight, a modular recessed ceiling light that works with Matter, alongside Sense+ and Nanoleaf 4D controls. Presented in a square modular RGBW LED form factor that offers 16 million colors, the Skylight can be arranged with other Skylights to create aerial designs and comes with features to adjust the brightness, colors and temperatures of color and set schedules.

As a bonus, the Skylight can act as a wire edge router and incorporates Sense+ sensors to enable motion and light detection. 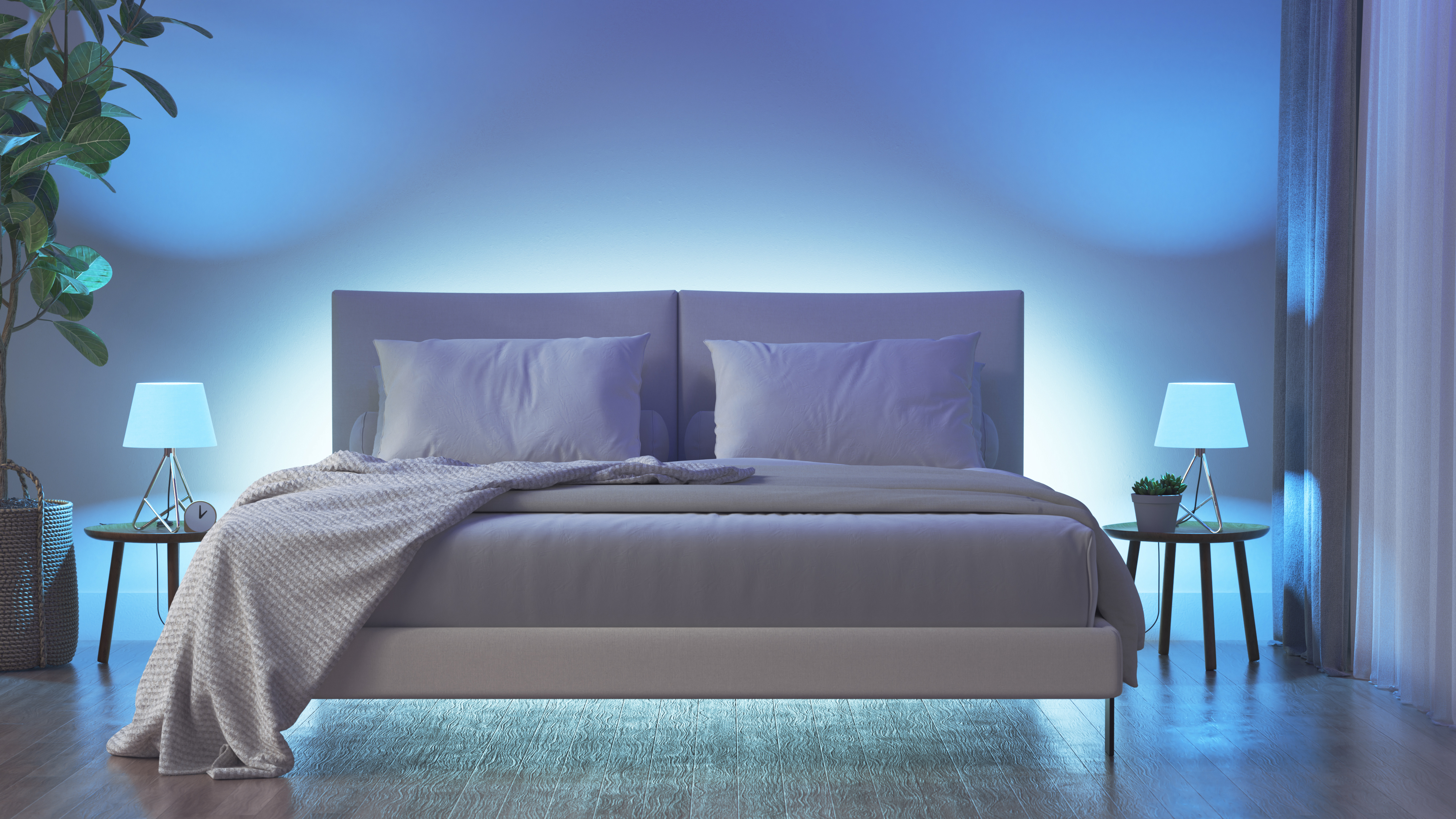 Finally, Nanoleaf launched the Matter-certified Essentials light bulbs and strips, which offer “spellbinding” animations for different activities (in the company’s words). Existing Nanoleaf owners needn’t rush to buy them strictly for Matter connectivity, though – Nanoleaf says its full line of modular light panels and light bars can be upgraded to Matter later this year.

The Sense+ Controls and Skylight range are set to launch in Q3 2023, according to Nanoleaf – a few months after the Essentials and Lightstrip bulbs (which will arrive in Q1). Nanoleaf 4D will hit the market in Q2 in two length options, meanwhile – 55″-65″ and 70″-80″. No word yet on pricing.

Not all news on the site expresses the point of view of the site, but we transmit this news automatically and translate it through programmatic technology on the site and not from a human editor.
newsnetdaily4 weeks ago