More than half of patients have struggled to get a GP appointment since the pandemic struck, a survey has revealed.

As much as 53 per cent of those questioned said it was ‘harder’ to book to see their doctor either in person or over the phone, according to YouGov.

Patient demand has surged in recent months as patients have ailments checked, but the number of appointments available has not kept pace.

The latest NHS figures on GP appointments show there were only 22.8 million in July, an 85 per cent plunge compared to the same time last year.

The survey, carried out for The Times, also found that 30 per cent of patients were finding it about as hard to book an appointment now as before the pandemic.

And 16 per cent said they were finding it easier to book appointments despite the added pressures on the health service.

GP practices have been forced to hold more appointments online by the pandemic, in order to keep their services safe and accessible.

Somerset-based NHS provider askmyGP said only 8.5 per cent of its appointments were carried out face-to-face between 1 March and 30 June, compared to 38 per cent during the same period last year.

NHS figures show that just 50 per cent of appointments were held face-to-face, compared to 80 per cent last year. 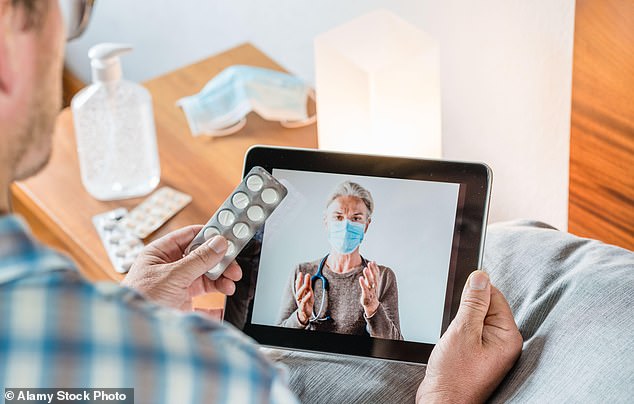 The pandemic had led to people staying away from GP practices, instead opting for online or over-the-phone appointments. There was also less pressure on hospitals (stock)

Patient bodies have expressed concern, however, that the change could be leading to potentially fatal conditions like cancer being missed in the early stages.

Linda Millband, head of clinical negligence at Thompsons Solicitors, told The Times this will lead to serious issues.

Many of the claims her practice has dealt with over the last three months have been linked to health conditions that worsened after patients weren’t able to get an appointment to see their GP, including cancer cases.

In a letter to all GP practices at the end of July, the NHS’s chief executive officer Sir Simon Stevens said: ‘All GP practices must offer face-to-face appointments at surgeries as well as continuing to use remote triage and video, online and telephone consultation where appropriate, while considering those who are unable to access or engage with digital services.’

It said practices should look to cut down the backlog of childhood immunisations and cervical screenings and carry out structured medicine reviews in care homes. 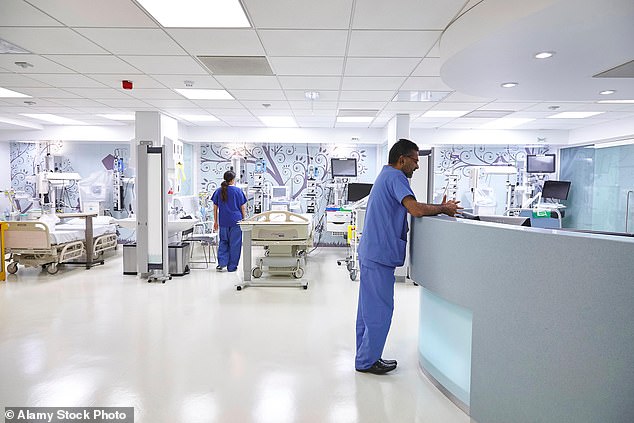 In April the NHS urged people to return to their GPs amid fears thousands of conditions were being missed in the early stages as people steered clear of medical practices.

The chair of the academy of medical royal colleges, Professor Carrie MacEwen, said at the time: ‘We are very concerned that patients may not be accessing the NHS for care because they either don’t want to be a burden or because they are fearful about catching the virus.

‘Everyone should know that the NHS is still open for business and it is vitally important that if people have serious conditions or concerns they seek help.’

Backlog of up to 2.4 MILLION patients awaiting cancer treatment or scans should clear ‘within months’, insists Matt Hancock as he claims U-turns are because of the ‘unprecedented’ crisis

By Alice Cachia for MailOnline

A backlog of cancer patients awaiting treatment should clear ‘within a matter of months’, the Health Secretary Matt Hancock has said.

He admitted that the number of cancer patients waiting longer than 62 days – the standard the Government wants to see – increased ‘substantially’ amid lockdown.

Mr Hancock told ITV News, though, that numbers have ‘more or less halved’ since the peak of the pandemic.

He said: ‘We’ve had to take action right across the NHS to make sure that we deal with Covid, and it was very important when there were a lot of new cases of Covid that people weren’t made more at risk because of treatments, especially for cancer.

‘But now it’s incredibly important for people to come forward.’ 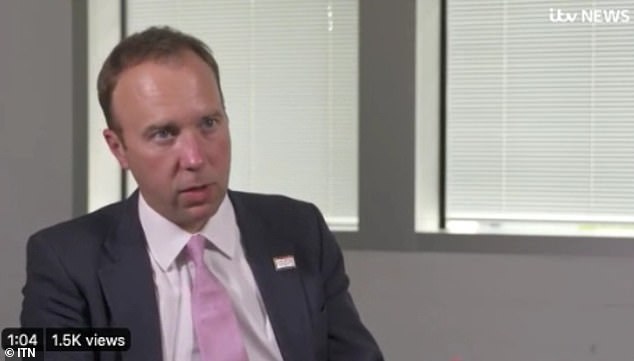 He refused to a put a ‘precise date’ on the number the backlog would be cleared by, because he said that ‘depends on how much Covid there is’

How Covid-19 has affected cancer patients in the UK

Cancer Research UK estimates 2.4 million people were waiting for a cancer screening, further tests or cancer treatment at the end of May.

An estimated 2.1 million people were waiting for breast, bowel or cervical screening.

The charity also found that one in three cancer patients say their treatment has been impacted by the effects of the coronavirus on the health system.

Around 4 in 10 people (42%) also said their tests had been affected, according to the survey of 1,900 cancer patients carried out in May.

Around 70% of people who had delays or cancellations to cancer testing and treatment also reported feeling more frustrated and anxious.

He refused to a put a ‘precise date’ on the number the backlog would be cleared by, because he said that ‘depends on how much Covid there is’.

Cancer Research UK says that 3,800 cancers would normally be diagnosed through screening in this time period.

In a recent study by the charity found that one in three cancer patients said their treatment has been impacted by the effects of COVID-19 on the health system.

This, they say, equates to hundreds of thousands of people experiencing cancellations, delays and changes to their treatment across the UK

Mr Hancock’s comments come after charity Macmillan Cancer Support found that the number of people in England being treated with radiotherapy for one of five common types of cancer dropped 24% in April, shortly after the country went into lockdown.

That rose to 43% for breast cancer as the number of people – including cancer patients – waiting longer than 18 weeks for hospital treatment rose to 1.85 million that month. 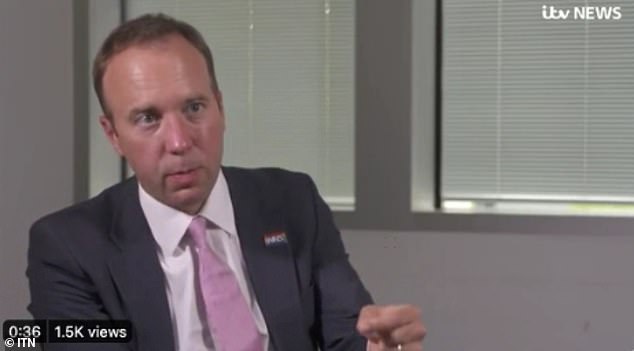 ‘What I can say though, is that we are already on the path to recovering the situation in cancer’, he added, after admitting that ‘some cancer treatment did have to stop’. 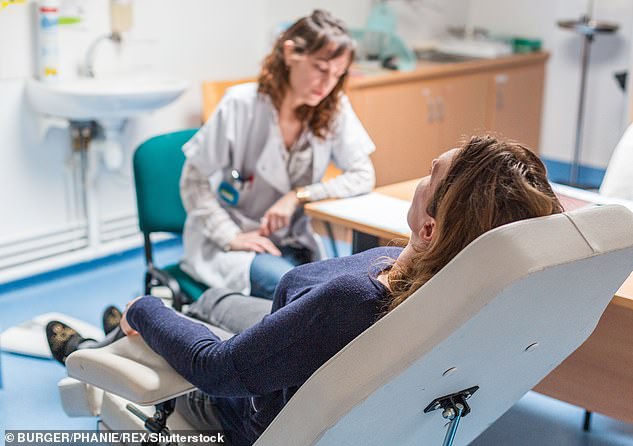 When asked about the Government’s U-turns on a number of recent policies, Mr Hancock said he believed people would have been ‘really cross’ if they did not happen.

‘We’re dealing with a crisis that is entirely unprecedented,’ he responded.

‘We’re dealing with a disease that didn’t even exist, as far as we know, before December last year.

‘And so, we’re taking decisions guided by the science on it.

‘I think people would, what people would get really cross about, is if a government refuse to change even if evidence came up that there was a better option.’

He also hinted that restrictions may not be eased over Christmas to avoid an ‘uptick’ in the number of coronavirus cases.

When asked whether he could assure that cancer patients will not have their treatment or surgery cancelled again in the event of a potential second wave in the winter, Mr Hancock said he could not guarantee it.

‘What I can say though, is that we are already on the path to recovering the situation in cancer’, he added, after admitting that ‘some cancer treatment did have to stop’.

On how long he thought the backlog could be cleared, Mr Hancock responded: ‘Well, I very much hope that that will happen within a matter of months.’

There is a likelihood that the virus could spread more easily in cold weather, he warned, as people will spend more time indoors as opposed to outside where it is ‘safer’.

But when asked whether there will be special rules to allow more people to visit one another over Christmas, Mr Hancock suggested it could lead to a rise in the number of people catching the virus.

‘The danger of a rule like that is that it increases the spread of the disease,’ he said.

‘I mean, there are an awful lot of things I’d love to be able to do, but the risk of them is that we see an uptick in the disease.

‘Hence, we’ve had to take decisions that you wouldn’t ever want to.’

On vaccines, the Health Secretary said there is potential for it to be available this year, but that it is more likely next year.

He continued: ‘It’s a very difficult science, it’s thankfully one that our scientists are up to, and each sign at the moment is going well and going in the right direction.

‘But we don’t want to raise people’s hopes too much.’

The Government is responding to ‘an increase in anti-vax messages and anti-test messages’, he added, with a programme under way to tackle ‘these sorts of conspiracy theories’ which he branded as ‘wrong’.

Artificial intelligence capable of spotting deadly diseases like cancer is to receive a £50 million funding boost in a bid to speed up diagnosis times.

The extra cash is being awarded to three specialist centres based in Coventry, Leeds and London, delivering digital upgrades to pathology and imaging services across an additional 38 NHS trusts, the Department of Health and Social Care (DoH) said.

It is hoped the technology will improve outcomes for millions of patients, providing a more accurate diagnosis and freeing up NHS staff time, as part of a Government commitment to detect three quarters of cancers at an early stage by 2028.

Health Secretary Matt Hancock said: ‘Technology is a force for good in our fight against the deadliest diseases – it can transform and save lives through faster diagnosis, free up clinicians to spend time with their patients and make every pound in the NHS go further.

‘I am determined we do all we can to save lives by spotting cancer sooner.

‘Bringing the benefits of artificial intelligence to the front line of our health service with this funding is another step in that mission.

‘We can support doctors to improve the care we provide and make Britain a world-leader in this field.

‘The NHS is open and I urge anyone who suspects they have symptoms to book an appointment with their GP as soon as possible to benefit from our excellent diagnostics and treatments.’

The Government said the investment will support its long-term response to Covid-19, allowing centres to work with British businesses and thereby support the economic recovery.

The DoH said that since the beginning of the coronavirus pandemic, more than 92% of urgent cancer referrals have been investigated within two weeks and 85,000 people have started treatment.

Darren Treanor, a consultant pathologist at Leeds Teaching Hospitals NHS Trust and director of one of the three centres, said: ‘This investment will allow us to use digital pathology to diagnose cancer at 21 NHS trusts in the North, serving a population of six million people.

‘We will also build a national network spanning another 25 hospitals in England, allowing doctors to get expert second opinions in rare cancers, such as childhood tumours, more rapidly.’

Adam Buxton: ‘I used to think, “Why isn’t Dad more proud of me?” But he was’ | Adam Buxton