This is when Joe Biden’s non-binary energy secretary allegedly stole a woman’s $320 Away-branded suitcase from a Las Vegas airport.

The case, which was lifted off a carousel, was filled with jewelry, clothing and makeup worth more than $3,000, according to 8 News Now Investigators.

It’s unclear why they targeted the suitcase or if it was because it was from a luxury brand.

It comes after Brinton, who uses the pronoun “they”, was also charged with stealing a suitcase from a Minneapolis airport.

Brinton is facing charges for the incidents at the Las Vegas and Minneapolis airports and they are due in court in Minnesota on December 19. The Department of Energy refuses to fire them. 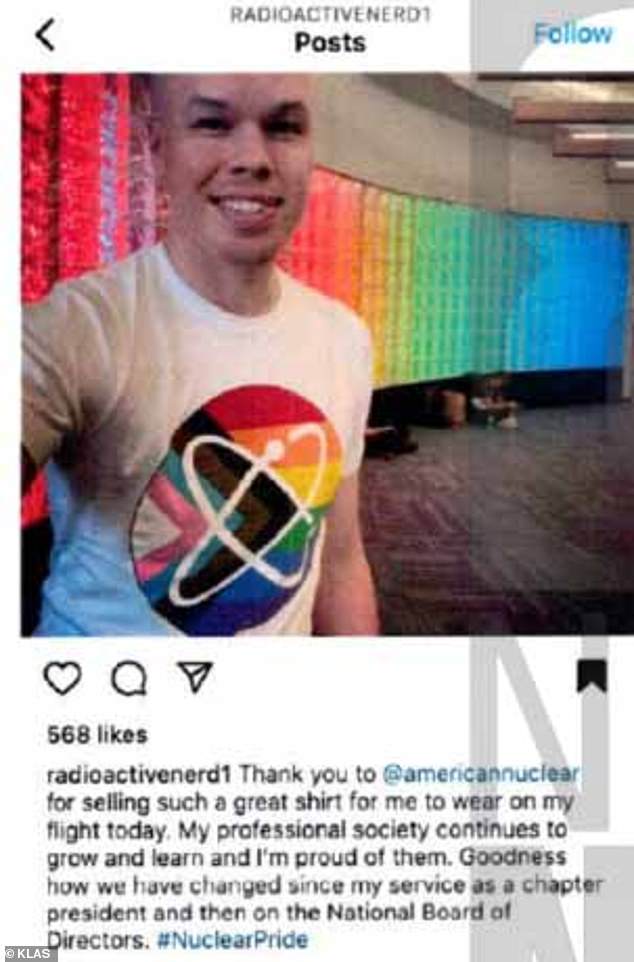 In the selfie, Brinton wears a white shirt with a rainbow atomic nuclear symbol design. It matches the shirt the suspect is wearing in the airport surveillance video, police said

The stolen suitcase was described in the report as a gray hard-shell “Away” brand “Bigger Carry-On” model worth $320.

The woman told cops her suitcase had a total value of more than $3,670 and included jewelry, makeup, contact lenses and clothing, according to the report.

When a Las Vegas Metropolitan Police officer reviewed the surveillance video, the officer “observed several nonverbal cues, or body language abnormalities, of the suspect that caught his attention,” the report said.

“Specifically, Brinton removed the victim’s luggage from the carousel and examined the tag.

‘Then put it back on the carousel, looking in all directions for anyone who might be watching or approaching.

“Remove it from the carousel and demonstrate the same behavior by looking around before quickly driving away with it.” 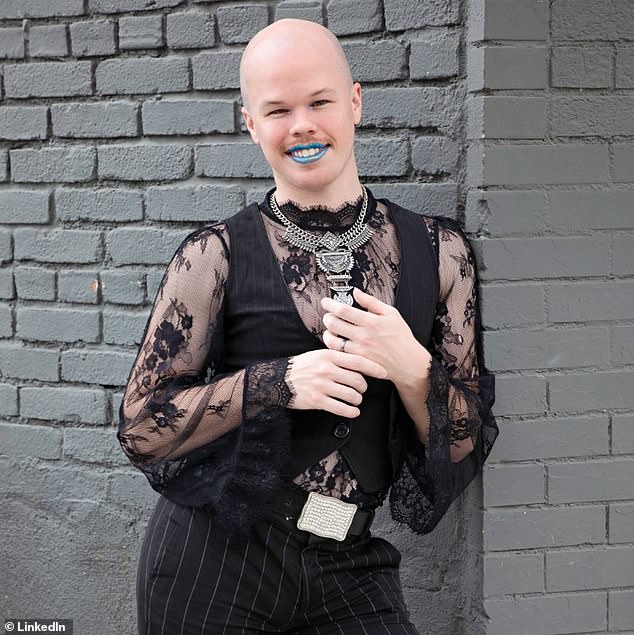 Brinton, the non-binary Department of Energy official charged with theft in Minnesota, was accused of stealing a second suitcase from a Nevada airport

A suspect was not identified until a police officer saw a news article in November naming Brinton as a suspect in the baggage theft at Minneapolis-Saint Paul International Airport in September.

The Minneapolis incident criminal complaint describes how Brinton traveled from Washington DC to Minneapolis without checked baggage, but then retrieved one from the baggage carousel once they landed in Minnesota.

Photos in news reports from Minneapolis matched the suspect in the Las Vegas luggage theft, according to the warrant filed this week.

The warrant revealed that Brinton had posted on Instagram on July 6, the same day of the robbery.

“Thank you @americannuclear for selling such a great shirt to wear on my flight today,” the post said. ‘My professional society continues to grow and learn and I’m proud of them. God how we have changed since my service as Chapter President and then on the National Board of Directors. #NuclearPride.’

In the selfie, Brinton wears a white shirt with a rainbow atomic nuclear symbol design. It matches the shirt the suspect is wearing in airport surveillance video, police said.

Brinton faces charges in both incidents and is due in court in Minnesota on the first charges, related to an incident that occurred in September while they were on their way to a conference.

There are growing calls among Republicans for Brinton – who enjoys some level of nuclear clearance thanks to his role – to be fired.

However, the Department of Energy refuses to fire the official as he is accused of a second baggage theft at the airport.

“If these latest allegations are true, Sam Brinton’s misconduct and gross lapse in judgment are worse than we thought – signaling disqualifying criminal behavior to represent the Department of Energy and influence policy.

Congressman Troy Nehls also demanded Brinton’s firing or resignation this morning, saying they should be “fired immediately” and have their clearance revoked.

But the Department of Energy has so far only furloughed Brinton. 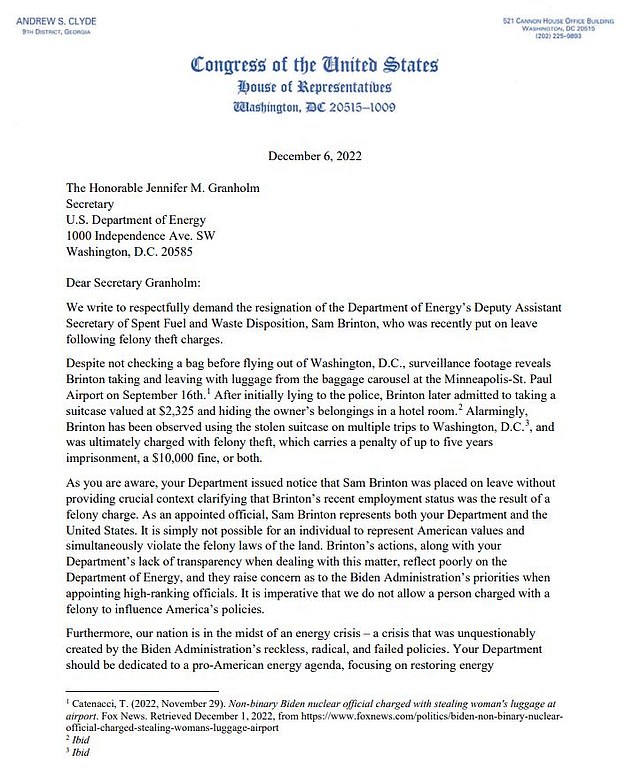 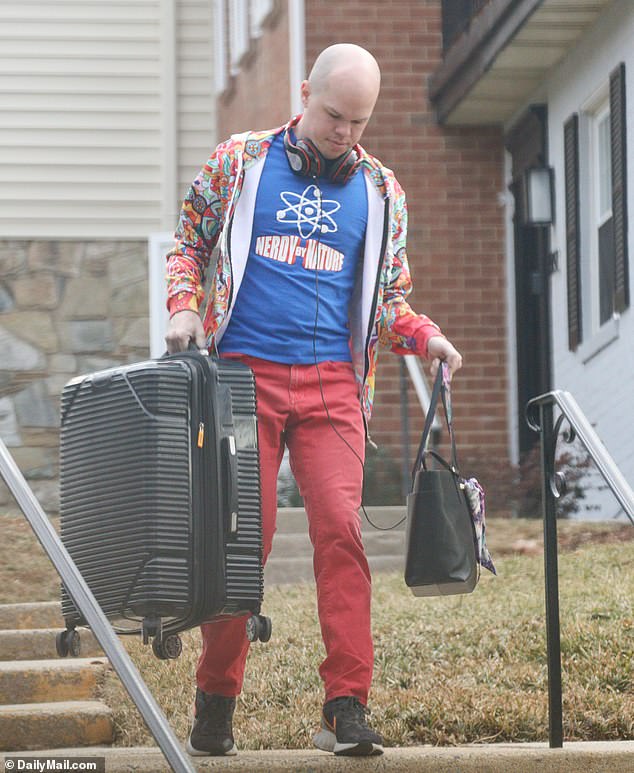 “The Department is limited by law on what it can disclose about personnel matters, such as an employee’s clearance status.

‘Generally, as the Department has previously stated, if a DOE clearance holder is charged with a crime, the case would be immediately reviewed by DOE personnel security officials and, depending on the circumstances , this review could lead to the suspension or revocation of the authorization. .’

Brinton was appointed in June to much fanfare. Their profile remains on the Department of Energy website.

“Sam is also a well-known advocate for LGBTQ youth and has helped secure protections against the dangerous and discredited practice of conversion therapy in more than half the country.

In addition to working at the Department of Energy, they also hold seminars, including a recent event on spanking. Brinton lives in Washington DC with their husband.