Microsoft Flight Simulator transformed some of its users into virtual storm chasers this week as they hunted down Hurricane Laura through the game’s new real-time weather feature.

Astounded players shared their ‘insane’ views of the virtual hurricane as the real storm swept through the Gulf of Mexico and barreled toward the United States.

Some users suggested it could even create a new storm chasing gaming experience.

Microsoft’s 2020 version of Flight Simulator was launched earlier in August, giving gamers the opportunity to fly across the world from the comfort of their homes. 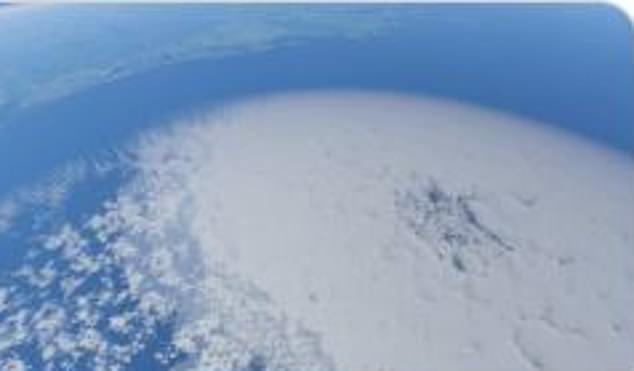 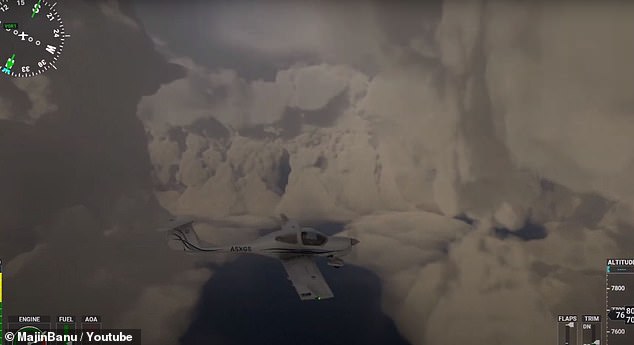 Players have already been using the game to explore some parts of the world they may never get to see, including attempts to get to Jeffrey Epstein’s private island.

This week, however, users flocked to schedule their virtual flights through the eye of Hurricane Laura, sharing the incredible and realistic spectacle the simulator presented to social media.

‘I genuinely just cannot believe this game is possible. The developers deserve to live the rest of their lives in comfort and happiness for having given this incredible game to us for the small price of $60,’ a user named Technically Alex wrote on Twitter.

‘I feel like MS Flight Sim is going to create a new genre of gaming events where people track down IRL weather events in-game to experience them. It’s so incredible that this stuff is possible,’ he added.

‘Flying into Storm Laura over Puerto Rico with the live weather was rather spectacular. Nice job.’

‘This is insane,’ added another. ‘Managed to get some shots of Hurricane Laura over Louisiana as it is happening right now on Flight Simulator.’

User Andrew Guidarelli joked about the number of flights in the game that were now going through the area as players rushed to catch a glimpse of the storm.

The next generation of the flight simulator gives players control of everything from a Pitts Special S2S biplane to an Airbus A320 Neo or widebody Boeing Dreamliner. 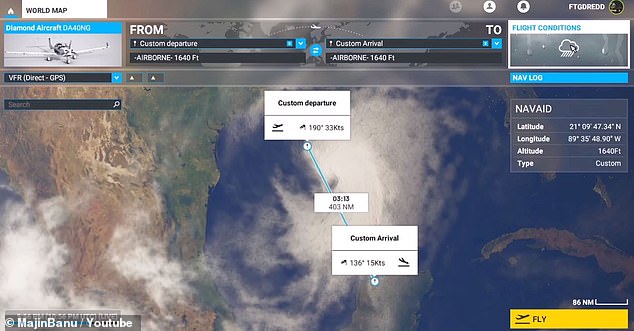 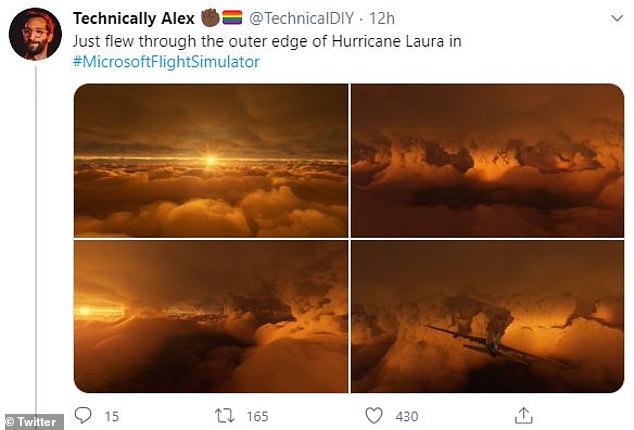 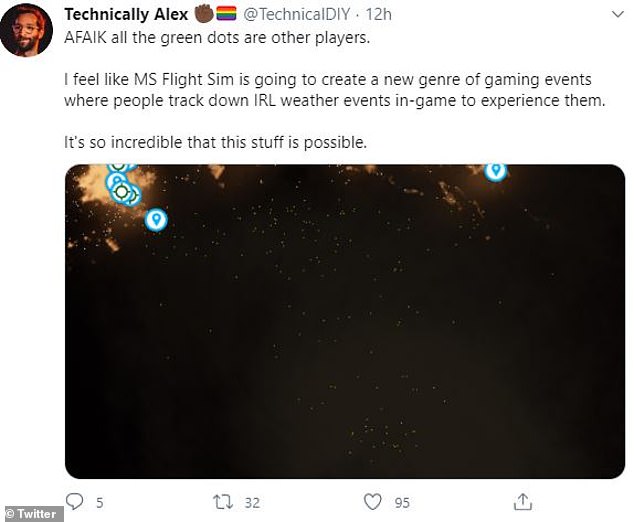 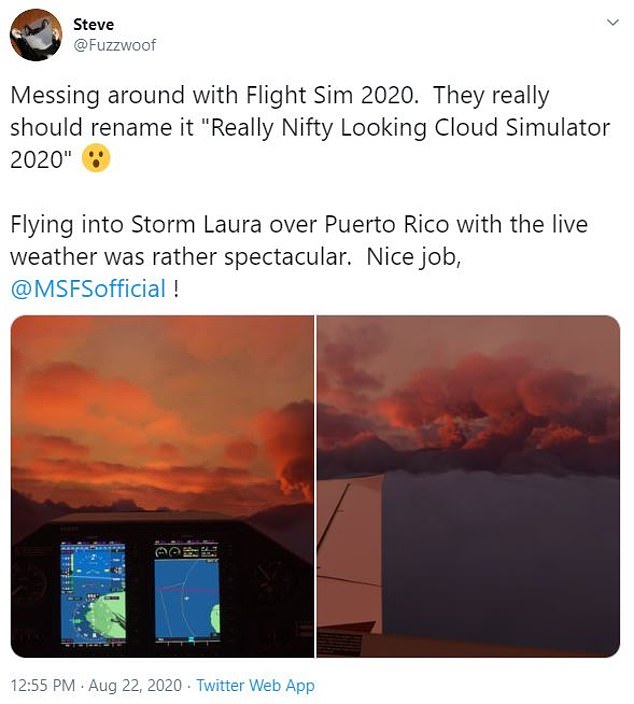 The storm was described as ‘spectacular’ by some players 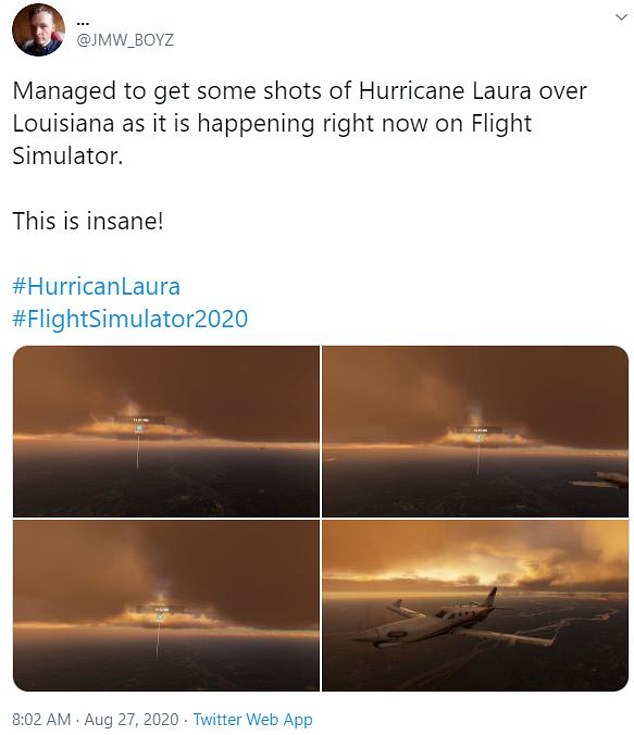 Software advances since  the 2006, and the onset of artificial intelligence, gave the designers the ability to map out much of the world with startling clarity, from the azure seas of the Caribbean to the graceful peak of Mount Kilimanjaro.

The realism is heightened by real-time weather data derived from Microsoft’s Bing servers, which gives armchair aviators the actual conditions in their area of flight such as turbulence from thunderstorms, rather than generic clouds.

This update on the weather conditions meant that gamers could track the category 4 hurricane with 150mph winds before it landed in Louisiana and Texas.

For this version of the game, Microsoft partnered with Swiss company Meteoblue to improve how the weather conditions looked.

The company works to split the world into 250 million boxes, which each measure wind speed, temperature, pressure, and other data to help the game look more realistic.

‘Yesterday’s hurricane was very beautiful to look at and was accurately predicted by our models even days ahead,’ Mathias Müller, Meteoblue co-founder, told The Verge. 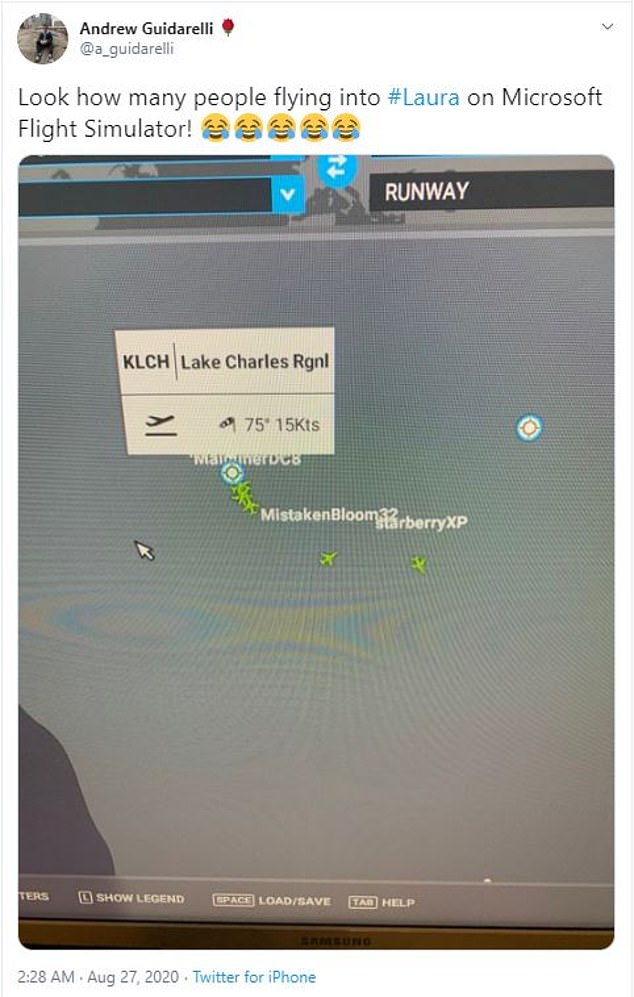 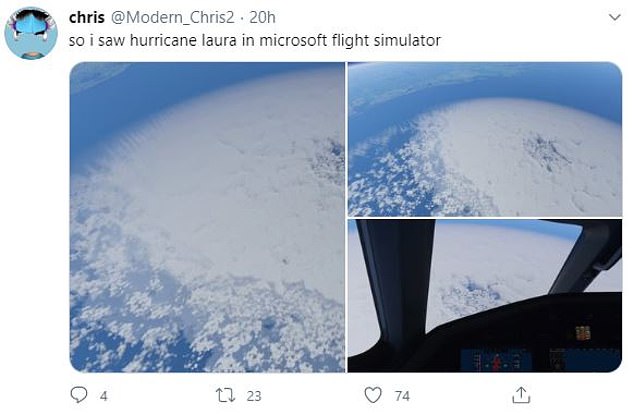 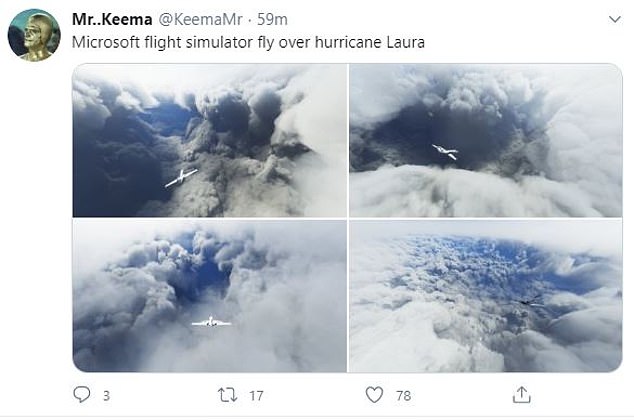 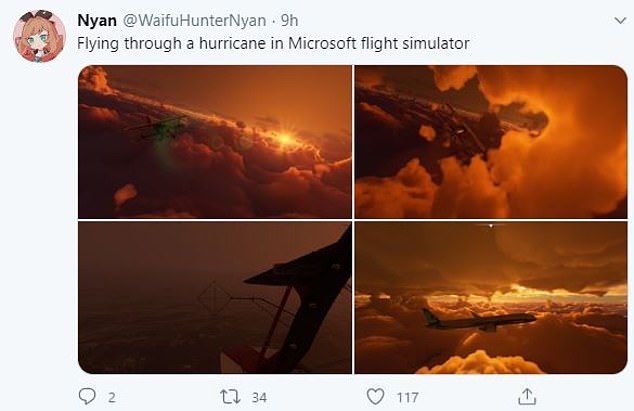 “We are very happy that real-time weather is now part of Flight Simulator. It was a long journey as integrating these massive amounts of data required the solution of many problems.

‘From our end, we would like to have even more details and weather parameters we already compute for our customers and the meteoblue.com website inside the game, but the development on the game side is extremely complex and takes time.’

Illustrating the game’s technical complexity, the desktop version comes on no fewer than 10 DVDs and requires at least 90 GB of hard-disk space – prompting some complaints of installation problems from early buyers. Powerful hardware is a must.

But in general, critics gave sky-high praise for Asobo’s hyper-realistic graphics and attention to cockpit detail, with review aggregator Metacritic scoring the game 93 out of 100.

‘Microsoft Flight Simulator is the most incredible experience I’ve ever had on a computer,’ commented IGN reviewer Seth Macy, who served in the US Air Force.

‘The realism, the depth, the almost limitless replayability – it’s like nothing I’ve ever played before.’

This is not the first time users have all focused on exploring one area of the world since the latest version of the game was released last week.

Some players already made attempts to get to Jeffrey Epstein’s private island in Little St James, US Virgin Islands, where the financier allegedly hosted Bill Clinton and Prince Andrew and abused multiple victims. 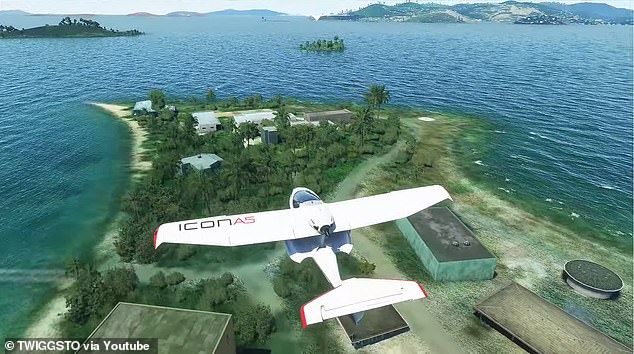 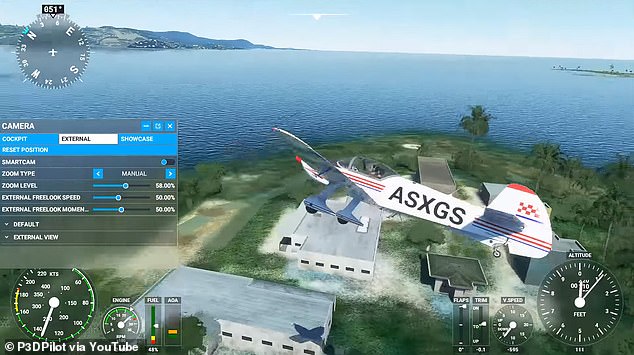 Microsoft’s game gives players the option to fly from an array of airports around the world past detailed cityscapes, including Epstein’s Caribbean estate known as ‘pedophile island’.

It was used by Epstein as a location for sex trafficking of underaged girls and was raided by the FBI shortly after he was indicted on multiple sex crime charges.

YouTubers and Reddit users have been discussing how to find the island, but it’s unclear how many gamers have either visited the island virtually or are trying too.

Hurricane Laura made landfall in southwest Louisiana as an ‘extremely dangerous’ Category 4 hurricane in the early hours of Thursday morning.

It has killed three people in the US as of Thursday afternoon, including a 14-year-old girl, after trees fell on their homes.

The storm system smashed into Texas and Louisiana with 150mph winds, leaving 700,000 without power as people who did not evacuate were told to write their names on a piece of paper and ‘put it in a ziplock bag’ in their pockets.

The hurricane made landfall at 1am with the strongest winds that Louisiana has seen since 1856 and warnings that the storm could rip apart buildings and penetrate up to 200 miles inland.

It is now pushing inland while the Gulf Coast faces storm surges and 10 inches of rain coupled with a high tide, the National Hurricane Center (NHC) says – while tornadoes could form at the edges of the weather system.

Millennial and Gen Z Republicans showcased at the Republican convention