Dozens of travelers at Melbourne Airport have been warned to expect delays as giant queues snake through the terminal.

Passengers faced chaotic scenes at the airport on Monday morning with lines seen stretching all the way to the international terminal.

Queues have also formed at the airport service counter after three flights to Sydney were canceled, leaving travelers scrambling to catch another flight.

Similar scenes are unfolding at Sydney Airport where dozens of domestic flights have been canceled on three airlines plagued by delays.

Twenty-one flights across Qantas, Virgin Australia, Jetstar and REX have been canceled with some passengers only given a few hours’ notice.

The chaos comes after the travel plans of thousands of Qantas passengers were upended on Sunday after a nationwide computer glitch.

Hundreds of passengers have been left in grounded planes on runways across the country after a computer glitch delayed up to a dozen flights.

Qantas said the issue was discovered around 4.30pm on Sunday and impacted 12 domestic flights, some of which were grounded for almost two hours. The issue was resolved around 6pm but caused delays throughout the evening.

Furious travelers eager to get home in time for the start of the working week have taken to social media to speak out about the delays.

Frustrated passengers took to social media to vent their frustration

‘An update on your international computer outage affecting every flight since departure???? Sitting in a fully loaded plane on the tarmac for 90 minutes for 2 hours is pretty ridiculous! a ground traveler fumed on Twitter.

The computer glitch also affected Qantas flights through Tasmania trying to take off in New Zealand.

“I’m still waiting at 7pm to leave on my Qantas plane from Auckland which was due to leave at 5.40am. Paperwork still needs to be signed,” wrote one traveler.

Wet weather as well as a rise in flu and Covid cases for airline staff have been blamed for widespread delays and cancellations in Sydney and Melbourne. 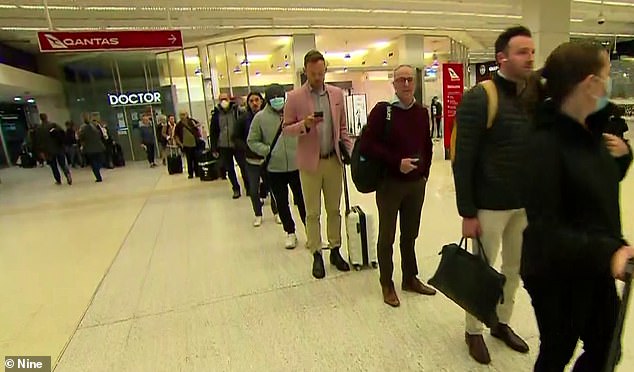 In Ukraine, Ravers clean up the rubble (in rhythm)