The danger of the idea that financial institutions should impose the global left’s agenda on climate change was highlighted this week by three events.

We witnessed the furious backlash when World Bank chief David Malpass refused to immediately pledge loyalty to the left’s position on climate change. At a panel discussion in New York, Malpass was asked if he agreed that “the artificial burning of fossil fuels is rapidly and dangerously warming the planet.” Malpass responded by saying, “I don’t even know. I am not a scientist. It is not a question.

This set off an international firestorm. The usual suspects from “non-governmental organizations” – usually groups lobbying for the transfer of money and authority into the hands of the government – and activists were quick to claim Malpass’s head. Al Gore has announced that it is “ridiculous to have a climate denier at the head of the World Bank”. Axios reported that Biden administration officials are plotting to oust Malpass, whose five-year term does not expire until 2024.

In reality, it is the campaign against Malpass that is ridiculous. As the World Bank pointed out after climate extremists began groaning for blood: “Under the leadership of David Malpass, the World Bank Group has doubled its climate finance, released an ambitious action plan on climate change and launched country-level diagnostics to support country climate and climate change. development goals.” Malpass clarified his remarks later in the week, saying he was not a “denialist” and agrees that “greenhouse gas emissions come from man-made sources, including fossil fuels, methane, agricultural uses and industrial uses.” He also said he agreed that these emissions contributed to climate change.

This did not satisfy his detractors for the obvious reason that they were not particularly upset by his more recent remarks. Last year, a group of 70 lobby groups jointly called for his removal. At the heart of the matter, Malpass refuses to give in to their demand that the World Bank phase out all fossil fuel funding. Malpass would have been better off directly attacking the left’s campaign to regulate climate change through the financial system. He could have replied that he has no position on the causes of climate change because that is not the responsibility of the World Bank. If national legislatures and leaders around the world want to phase out fossil fuel financing, they are free to do so, and the World Bank will respect those decisions. It is not the World Bank’s job to fight climate change, he should have said.

Similarly, the Office of the Comptroller of the Currency (OCC) is not responsible for addressing climate change. The OCC is one of the main banking regulators in the United States, alongside the FDIC and the Federal Reserve. However, absurdly, it has an office to assess “climate change risk”. The reason this exists is that the Biden administration has taken the view of left-leaning academics that regulators should discourage fossil fuel financing on the grounds that it creates a risk for banks to suffer losses once the United States inevitably rejects energy that produces emissions that are blamed for contributing to climate change. 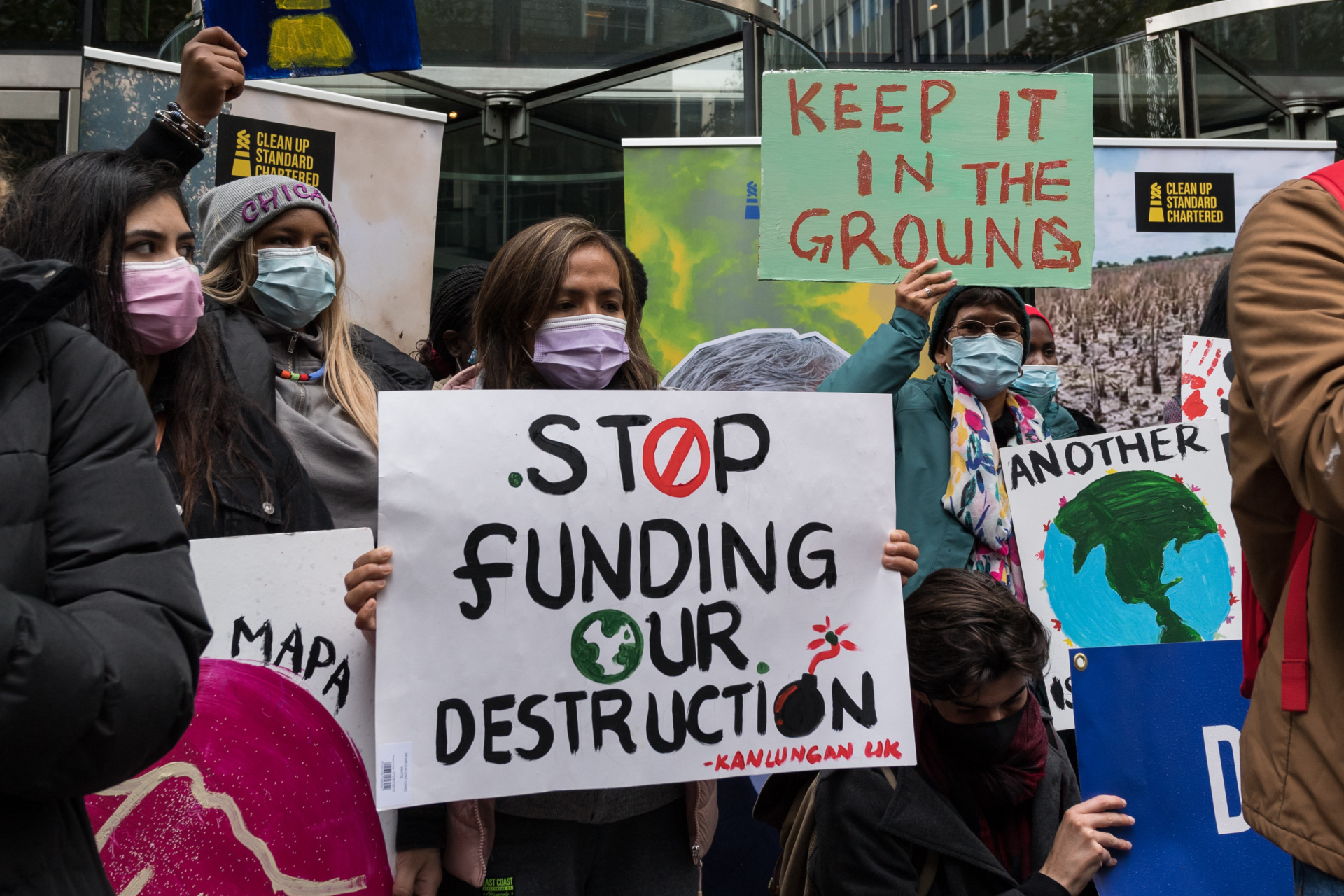 Climate change activists demonstrate outside the headquarters of Standard Chartered against the funding of fossil fuel projects in London, UK, on ​​October 29, 2021. (Wiktor Szymanowicz/Anadolu Agency via Getty Images)

Of course, there is nothing inevitable about the transition away from fossil fuels. It is one option among many to fight against climate change. It is not one that has been enshrined in United States laws or regulations. There is no consensus among the American people that this should be a goal, and there has been virtually no public deliberation about it. Even among those who agree that climate change poses serious challenges that will require changes in the way we produce energy, there is no logical need to agree that abandoning fossil fuels is the required response. Indeed, Americans may well decide that the costs of switching from fossil fuels are likely to be higher than the costs of developing new technologies to reduce their emissions or adapt to a climate-changing world.

Lawmakers have twice rejected the idea that financial regulators should apply a climate change agenda to the banking system. The first time was last fall when the administration was unable to garner support for its nomination of Saule Omarova to the Office of the Comptroller of the Currency and was forced to withdraw her nomination. The far-left law professor had argued for the elimination of private sector banks and the treatment of all businesses as franchises of the US government. She had said that the bankruptcy of junior oil and gas companies was to be welcome, a statement she later retracted, but only after it became clear that it was an obstacle to her confirmation.

Next comes the rejection of the nomination of Sarah Bloom Raskin to the Federal Reserve. Raskin is one of the most prominent advocates of using the concept of “transition risk” to pressure banks not to finance fossil fuels. Fortunately, Sen. Joe Manchin (D-WV) and all Republican senators realized that climate regulation through banking oversight positions was a bad idea. 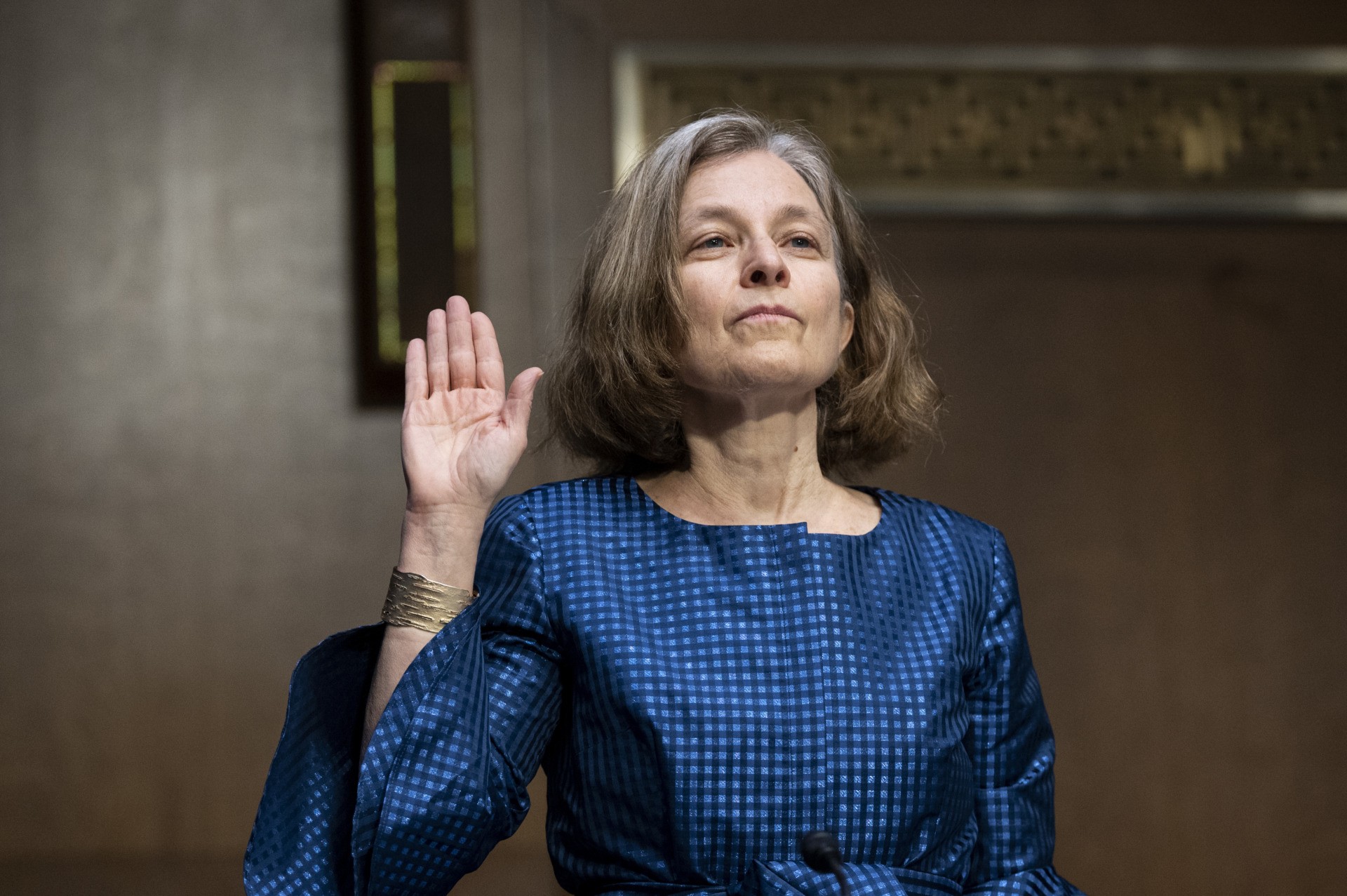 Sarah Bloom Raskin, nominee for Vice President for Oversight and member of the Federal Reserve Board of Governors, is sworn in during a Senate confirmation hearing February 3, 2022 in Washington, DC. (Bill Clark-Pool/Getty Images)

Still, that hasn’t stopped the Biden administration from appointing a Chinese-educated ESG proponent as the OCC’s director of climate risk. The position is not subject to Senate confirmation, so his nomination cannot be rejected by lawmakers. But that should not prevent Republicans and Democrats worried about government excesses and the infiltration of this radical policy of climate regulation by financial regulation from questioning the administration about this appointment and the existence of this office. The Biden administration, led by radical academic theory, is trying to conduct stealth regulation of the US economy by starving industries it dislikes of funding. That should worry lawmakers.

Finally, we had the ridiculous spectacle of Rep. Rashida Tlaib (D-MI) demanding in a House hearing that the leaders of our biggest banks commit to immediately end all funding for new fuels projects. fossils. Fortunately, they refused to do so. Jamie Dimon, the head of JP Morgan Chase, colorfully explained that this would put Americans “on the road to hell”. She responded to their refusal by threatening the banks with regulations to force them to comply.

It is particularly worrying that we are witnessing these events even as Europe plunges into a deep recession, largely because it has not invested enough in fossil fuel infrastructure, allowing itself to become dependent on natural gas Russian. We are only months away from the ESG-driven spike in gasoline prices here in the United States at an all-time high. The last thing the global economy or the US economy needs right now is less investment in oil and natural gas. Yet that is what each of these events is trying to bring about. If anything, the real transition risk turned out to be the fact that the US and European economies tried too soon to move away from fossil fuel investments.

Not all news on the site expresses the point of view of the site, but we transmit this news automatically and translate it through programmatic technology on the site and not from a human editor.
Tags
climate control extremism finance leftwing
Facebook Twitter LinkedIn Tumblr Pinterest Reddit VKontakte Odnoklassniki Pocket