Joe Biden questioned the cognitive ability of President Trump as he went after him for his handling of the coronavirus crisis and the Russian bounty scandal.

Biden, who gave remarks and then took questions at a high school in Wilmington, Delaware Tuesday, said it was a ‘dereliction of duty’ for not giving a stern warning to ‘Vladimir, ol’ buddy,’ as soon as Trump was told intelligence said Russia was offering the Taliban bounties for American soldiers.

‘This president is talking about cognitive capability, he isn’t even cognitively aware of what’s going on,’ Biden told reporters during the Q&A. ‘He either reads and-or gets briefed on important issues and he forgets it, or he doesn’t think it’s necessary that he need to know it.’

Biden’s main remarks focused on Trump’s handling of the coronavirus crisis, as he demanded that the president fix shortages in personal protective equipment for healthcare workers ‘before you tee off another round of golf.’

‘It seems like our wartime president has surrendered – wave the white flag and left the battlefield,’ Biden said. 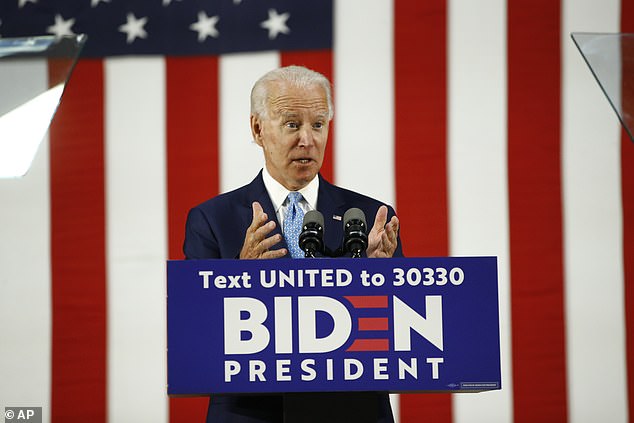 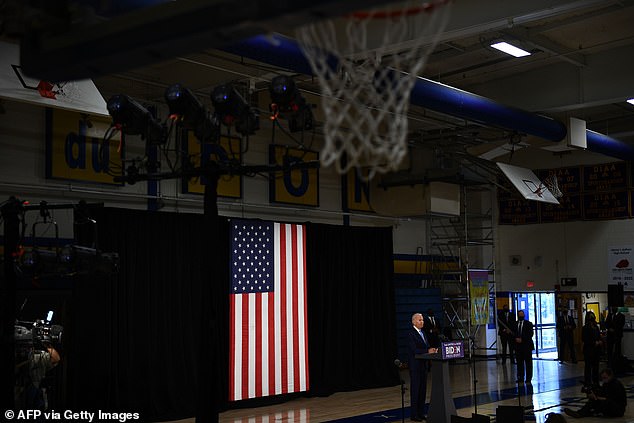 Joe Biden gave a speech and took questions at a high school in his adopted hometown of Wilmington, Delaware. Biden took on Trump for his response to the coronavirus crisis and the Russian bounty scandal 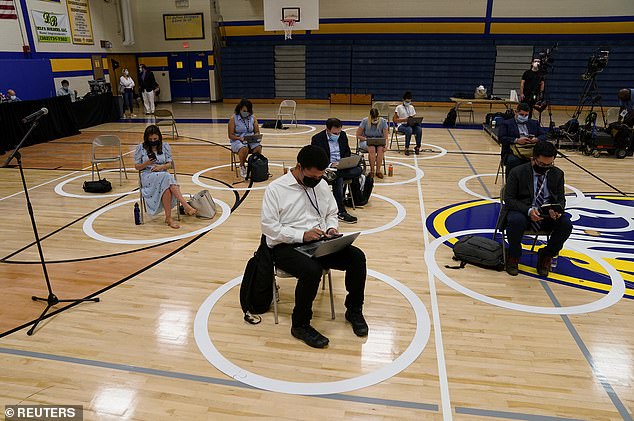 Joe Biden answered reporters’ questions at the Tuesday event. Reporters wore mask and were spread more than six feet apart to proper the recommended social distancing protocols to prevent the contraction of coronavirus

As coronavirus cases continue to grow around the U.S., Trump spent time Saturday and Sunday at his Sterling, Virginia golf club after cancelling a planned trip to his Bedminster, New Jersey golf property.

Biden slapped Trump for ‘his historic mismanagement of the biggest public health crisis in 100 years’ that is ‘continuing to cost Americans lives and wreck our economy.’

Biden said that the American people didn’t make ‘enormous sacrifices over the past four months’ so Trump could waste time ‘with late night rantings and tweets.’

‘They didn’t make these sacrifices so you could ignore the science and turn responsible steps like wearing a mask into a political statement,’ Biden said. ‘And they certainly didn’t do it so you could wash your hands and walk away.’

The Biden campaign rolled out an updated COVID-19 plan in the hours running up to the presumptive nominee’s Wilmington speech.

Part of it, the campaign announced, was convincing Dr. Anthony Fauci, the nation’s leading infectious disease doctor, to stay on and work for yet another administration.

Biden also said that he would start tackling the crisis minutes after the November presidential election is called.

‘Minutes after he is declared the winner of the election, Biden will make one of his first calls to Dr. Tony Fauci and ask him to extend his unprecedented record of service to six Presidents by serving one more,’ a campaign memo said. ‘Dr. Fauci will have full access to the Oval Office and an uncensored platform to speak directly to the American people – whether delivering good news or bad.’ 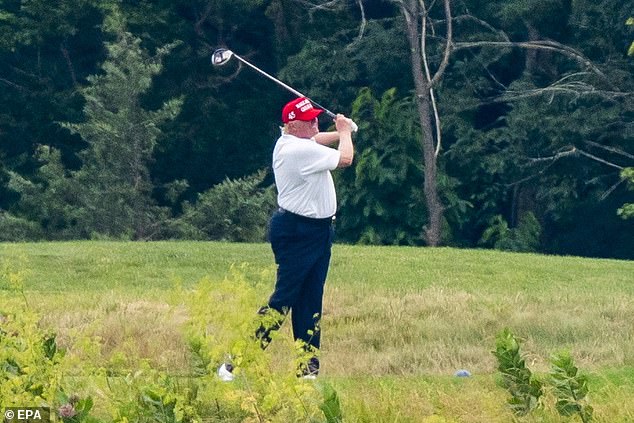 Joe Biden went after President Trump (pictured) for golfing. Trump spent both Saturday and Sunday at his Virginia golf club after cancelling a planned trip to his Bedminster, New Jersey facility 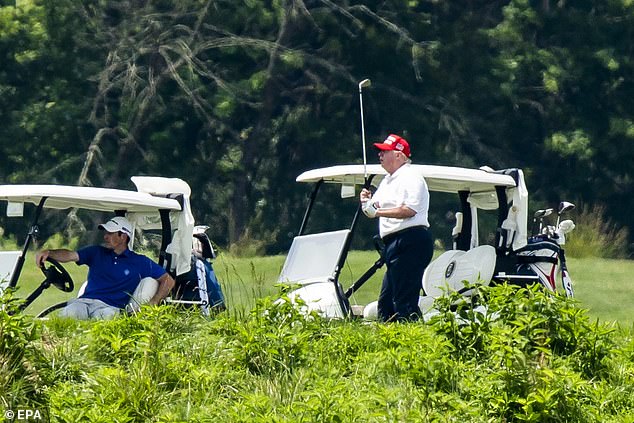 President Trump is photographed golfing at his Trump National Golf Club in Sterling, Virginia on Saturday

The Tuesday speech marked the second time in a week that the former vice president has emerged from his basement rec room – where he’s been holding Zoom fundraisers and campaign events – to pan Trump’s coronavirus crisis response and his overall behavior.

It also marked his first press conference in months.

Reporters in Wilmington were instructed to wear masks and had their temperatures taken directly before Biden’s appearance.

The former veep revealed that he hasn’t gotten a coronavirus test, but planned to soon, pointing out that his staff and the Secret Service agents who guard him get tested frequently.

‘I haven’t wanted to take anybody else’s place in the process,’ Biden explained.

As soon as the Q&A kicked off, Biden was asked for his take on the news reports that Trump was told in early 2019 that Russia was offering Taliban fighters bounties to kill American service members.

The White House continues to deny Trump knew about it despite reports that say otherwise.

Biden then made it personal.

‘I was talking to Jill, my wife Jill, and I don’t see her get outraged very often, and she started asking me, “Joe, what would you have done if Beau was still in harm’s way and this information came out?”‘

‘I’m sorry, I apologize,’ at the mention of his deceased son.

‘If he’d been in Afghanistan … What are those parents thinking out there?’ Biden continued. ‘It’s an actual dereliction of duty if any of thise is remotely true.’

‘If these allegations are true and he did nothing about any of this then the fact, I think, the public should – unrelated to my running – conclude that this man isn’t fit to be president of the United States of America,’ Biden added.

Biden also gave an update on the state of the race.

‘This is the most unusual campaign I think in modern history,’ Biden chuckled. ‘I start off with a premise that I’m going to follow the docs’ orders,’ he said.

Biden explained that that meant no rallies.

Trump has already resumed campaign events and has been criticized for bringing large crowds together in indoor venues and not mandating they wear masks.

‘I’d much rather be doing it in person,’ Biden said of campaigning.

He also said it’s ‘much too early’ to read too much in the polls, some of which show Biden leading Trump nationally by double-digits.

President Trump’s campaign has been pushing for more.

He was an athlete in the best shape of his life. Then Covid-19 nearly killed him

world news China has just contained the coronavirus. Now it’s battling some of…