Joe Biden challenged President Donald Trump to ‘get off twitter’ and meet with Speaker Nancy Pelosi and other congressional leaders to pass emergency funding for schools dealing with the coronavirus pandemic.

‘Get off Twitter and start talking to the congressional leaders in both parties. Invite them to the Oval Office,’ Biden said Wednesday in a campaign speech designed to focus the country’s attention back on the COVID crisis.

‘You always talk about your ability to negotiate. Negotiate a deal,’ the Democratic presidential nominee challenged his Republican rival. 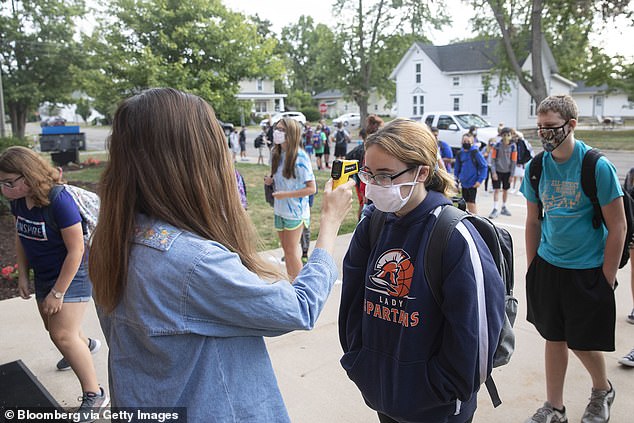 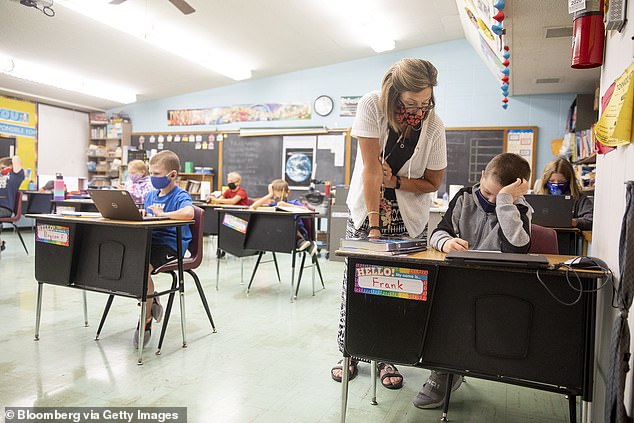 Joe Biden attacked President Trump’s handling of the coronavirus pandemic, showing how it is has impacted the everyday lives of Americans and disrupted the school year

Biden and his wife Jill, who is a teacher, received a briefing on schools and how they are handling the pandemic ahead of Biden’s remarks as his campaign sought to turn the national conversation back to the pandemic, where voters give the president low marks for his handling.

Trump has been pushing his ‘law and order’ themed presidency and bashing Black Lives Matters protesters for causing damage in their demonstrations across the country.

But Biden sought to show sympathy with families who are struggling with the challenges of every day life under the pandemic, which has infected more than 6.9 million people in the United States and killed more than 185,000 people.

‘If President Trump and his Administration had done their jobs America’s schools would be open,’ he said in his attack on the president’s handling of the crisis.

‘Instead American families all across this country are paying a price for his failures,’ he added.

The speech was part of Biden’s strategy to appear presidential in contrast to Trump. He’ll keep adding to that comparison when he goes to Kenosha, Wisconsin, to hold a town hall meeting on the racial tensions that came after a white police officer shot Jacob Blake, a black man, seven times in the back in front of his children.

‘There’s been overwhelming requests that I do come because what we’re going to do is we got to heal,’ Biden said when asked about his visit.

We got to put things together, bring people together. And so, my purpose in going will be to do just that to be a positive influence on what’s going on. Talk about what needs to be done,’ he said.

Trump was in Kenosha on Tuesday, where he had few words for Blake and his family but offered a defense of the police and criticism of the protests.

‘These are not peaceful protests but domestic terror,’ he said during his visit.

Joe and Jill Biden will also visit Shanksville, Pennsylvania, to commemorate the 19th anniversary of 9/11, on Friday, September 11. President Trump and Melania Trump visited the memorial on September 11, 2018.

While Biden has pushed to keep the national conversation on the coronavirus, some Democrats have fretted he should be taking on the president’s tough talk about the demonstrations that have sprung up in cities around the country, sparking fear among the party it could hurt Biden at the polls. 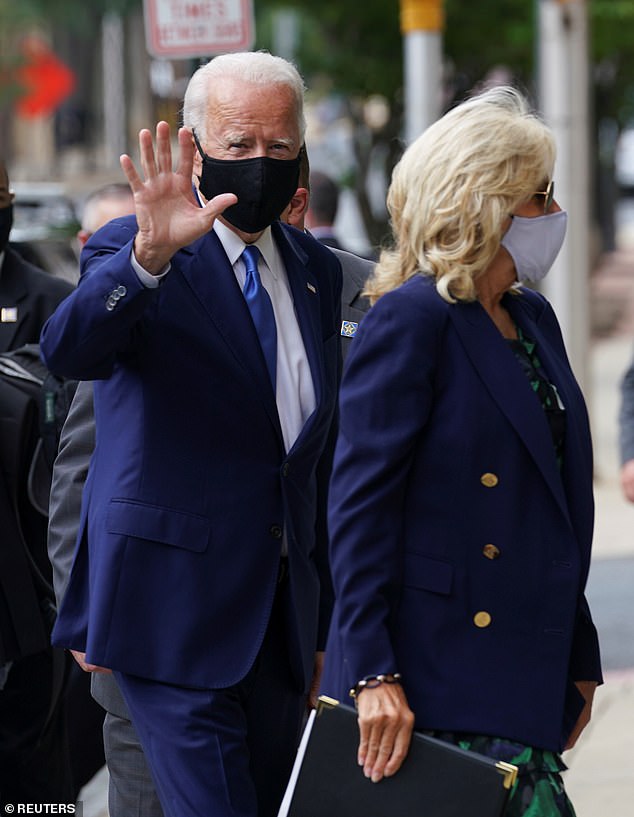 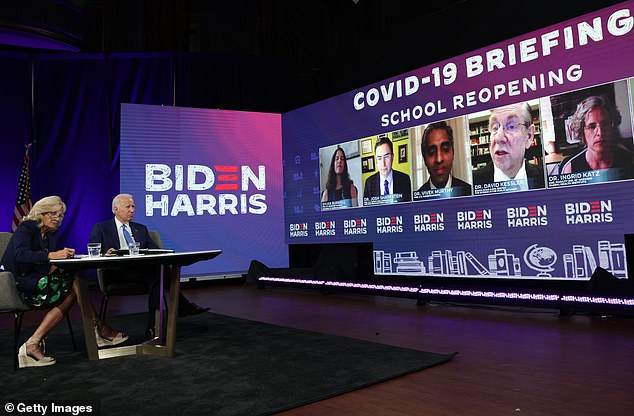 But Biden said Wednesday the situation in the nation’s schools was a national emergency and called on Congress to pass emergency funding to help schools deal with the crisis.

‘Protecting our students, our educators, and our communities. Getting our schools open safely and effectively – this is a national emergency,’ he said.

He outlined the action he would take as president: K-12 schools would get full access to disaster relief and emergency assistance funds; PPE and sanitation supplies for schools; emergency funding for ventilation and other health measures; more money to hire more teachers to keep classes small and socially distanced money; and funds for more psychologists and counselors to support children’s mental health.

Biden gave a cost estimate of $200 billion with additional money needed for colleges and universities.

His speech came after President Trump attacked him for  ‘low energy’ and complained his rival was ‘back in his basement’ after the Democratic nominee made a highly-visible campaign stop in Pittsburgh on Monday.

Trump also claimed Biden is on some kind unspecified ‘enhancement’ drug during an interview with Fox News that aired on Tuesday. But he did not offer any proof and was not pressed on his claim.

The president lashed out at his rival after a new round of polls showed Biden in the lead after the Republican National Convention, despite the expectation Trump would get a boost after his nomination for a second term. 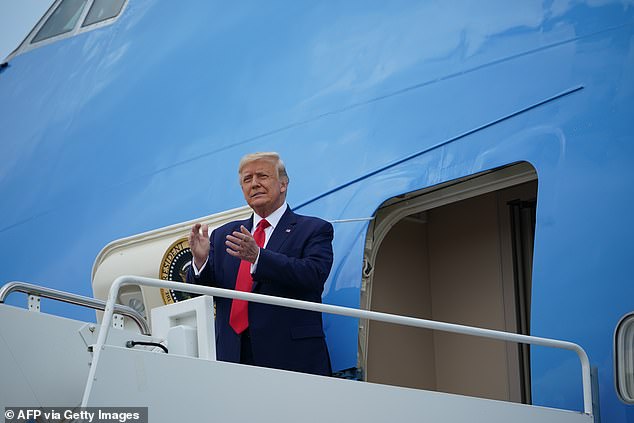 President Trump has thrown out several attack lines on Biden, questioning his health, his mental abilities and his policies 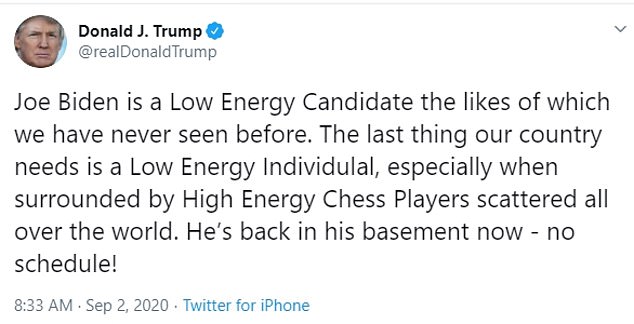 ‘Joe Biden is a Low Energy Candidate the likes of which we have never seen before. The last thing our country needs is a Low Energy Individual, especially when surrounded by High Energy Chess Players scattered all over the world. He’s back in his basement now – no schedule!,’ Trump tweeted Wednesday morning.

Biden has upped his campaign presence now that the political conventions have ended. On Monday, he gave a speech in Pittsburgh where he attacked Trump’s response to racial unrest and delivered pizza to local firefighters.

The president has thrown out several attack lines on Biden, questioning his health, his mental abilities and his policies, including distorting Biden’s record to claim he would defund the police – which Biden has said he would not. He has accused Biden of ‘hiding’ in his basement while the Biden campaign said the candidate is simply following coronavirus guidelines.

Trump told Fox News he wanted Biden to take a drug test before their first presidential debate because he claims the Democratic presidential nominee is on ‘some kind of enhancement.’

He did not specify and offered no proof.

‘He’s on some kind of an enhancement, in my opinion,’ he said. ‘ I want to take one. I’ll take one, he’ll take one. We should both take a drug test.’

Biden admitted Wednesday he’s going to have spend some of the record $365 million he raised in August to counter Trump’s ‘lies.’

‘Counter the lies that are being told about me by Trump’s campaign,’ he said when asked how he’d spend the money. 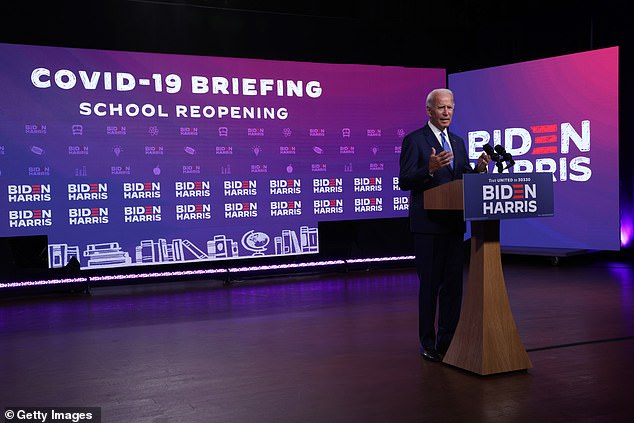 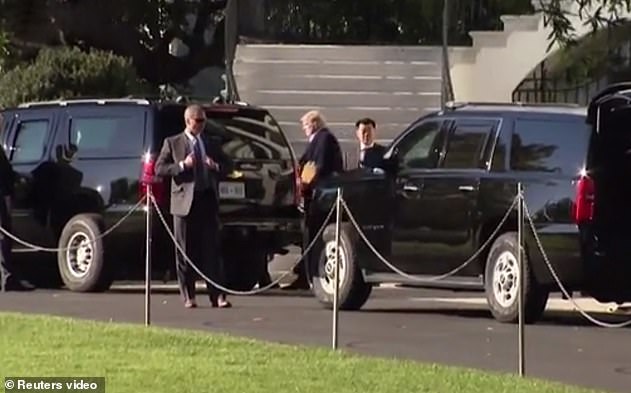 President Trump in route to Walter Reed on Saturday, November 16, 2019, for a visit the White House said was part of his routine physical

He refused to be drawn into a personal attack on President Trump, declining to speculate about his health after the president went after the ‘FAKE NEWS’ on Twitter in the wake of explosive revelations in a new book that Vice President Mike Pence was on standby during the unscheduled November 2019 trip, which the White House said at the time Trump took because he had a ‘free weekend.’

‘It never ends! Now they are trying to say that your favorite President, me, went to Walter Reed Medical Center, having suffered a series of mini-strokes. Never happened to THIS candidate – FAKE NEWS. Perhaps they are referring to another candidate from another Party!’ Trump wrote – making the suggested that rival Joe Biden had suffered a stroke without offering evidence.

And Pence, on Tuesday night, said he didn’t recall being put on stand by.

‘I don’t recall being told to be on standby,’ Pence told Fox News in an interview. ‘I was informed that the president had a doctor’s appointment, [but] I’ve got to tell you, part of this job is you are always on standby if you are Vice President of the United States.’

Biden declined to speculate on what Trump’s unexpected trip to Walter Reed entailed.

He said in his eight years as vice president under President Barack Obama, he was only put on notice when Obama went out of the country.

‘The only time that I have been on notice is when the president’s out of the country. And I’m in the country,’ he said.

But his focus Wednesday was on education.

Jill Biden, a teacher who said she plans to continue her classroom work should she become first lady, is also leading a ‘Back-to-School Tour’ of 10 cities in eight battleground states this week – some events will be virtual and some will be in person with social distancing measures in place. 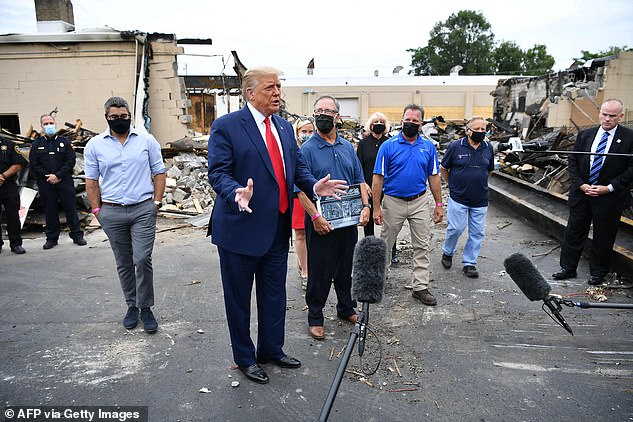 President Donald Trump speaks to reporters as he surveys riot damage in Kenosha, Wisconsin on Tuesday 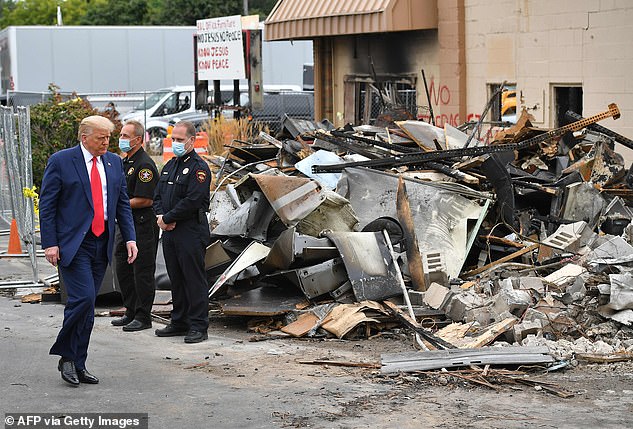 President Donald Trump walks through burned out buildings Tuesday during his trip to Kenosha, Wisconsin 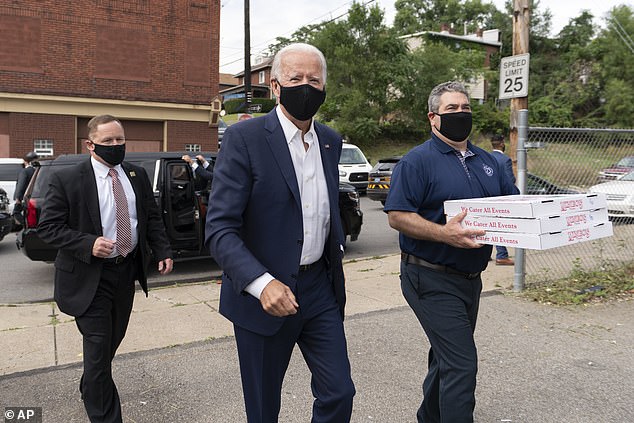 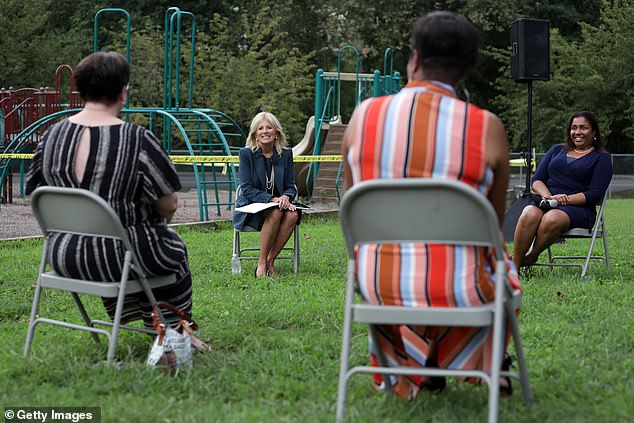 President Trump has pushed schools to reopen despite the pandemic, which has infected more than 6.9 million people in the United States and killed more than 185,000 people

Many school districts, however, have opted to begin the school year with virtual learning instead.

The president was  in North Carolina on Wednesday to designate the city of Wilmington as the first American World War II Heritage City. He made his remarks from the Battleship North Carolina.

The Biden campaign has been stressing how Trump’s COVID response has affected the everyday lives of Americans.