Pro-democracy activist Lee Dae-seon of South Korea shared the letter with Vice, who posted it on Tuesday. Besides wishing Wong a “Merry Christmas”, Thunberg expressed his support for his cause, called him a “great hero” and asserted, “You are never alone”.

The letter will likely scandalize the Chinese government, which views Wong as a dangerous secessionist for organizing peaceful resistance to China’s illegal destruction of the Hong Kong democratic system. This destruction, increasingly brazen in light of the wave of anti-China protests in 2019 that drew millions of people, ended with the adoption of a “national security” law by the National People’s Congress (NPC) in Beijing which sets heavy prison sentences for vague “crimes” such as “subversion of state power”.

Under Hong Kong’s “One Country, Two Systems” policy, NPC laws should not apply in Hong Kong, but the police enforced the “National Security” law anyway.

Wong faces life imprisonment for “subversion” and has already been sentenced to more than two years in prison for, among other things, attending a vigil for the victims of the Tiananmen Square massacre in 1989.

“Merry Christmas and happy holidays! You are a great hero, we are always with you, ”Thunberg wrote to Wong in the letter revealed this week. “Stay strong and never give up. You are never alone. I really hope we can meet one day.

“Keep fighting and take care of yourself. Send love, support and strength from Sweden,” the letter concludes, according to Vice.

Lee, the activist who hopes to relay the letter to Wong, told Vice that he asked Thunberg to write to Wong in order to raise awareness of his ongoing detention. Lee is an advocate for Hong Kong and has helped the movement, the outlet reported, translating the protest leaders.

“I thought Thunberg’s letter could mean the most to Wong. That’s why I wanted to send him his letter, ”Lee said.

Lee took part in a “Fridays for Future” event with Thunberg in Sweden on Friday. Thunberg posted a photo alongside Lee on his Twitter account in which the two, and two other activists, hold up protest placards urging more efforts to stop climate change.

“Fridays for Future” is the weekly school boycott campaign that Thunberg started as a teenager. It has spread around the world, including China, where the regime has arrested participants. Ou Hongyi, the first known Fridays for Future participant in China, was arrested in October 2020 for skipping school to protest the climate crisis – for which China currently bears a disproportionate share of blame. At the time, Thunberg issued a statement sending Ou “solidarity and gratitude” for exposing China’s environmental crimes.

In the early years of her activism, Thunberg was criticized for disproportionately targeting Western countries in her calls for environmental protection policies. She increasingly identified China, the world’s worst polluter, as one of the main culprits in what she called an existential crisis for humanity. She separately angered the Communist Party through her friendship with Wong. Like Thunberg, Wong began his career in activism as a teenager – Wong started protesting China at age 14 – but mainly focused on calling for the preservation of the free system and democratic regime that Hong Kong enjoyed as a British colony and during its self-governing semi-state before the passage of the “National Security” Act.

Thunberg first publicly supported Wong through a blurb written for his 2020 book Non-free speech in which she writes: “Joshua Wong is a courageous and inspiring young leader. Together we are one strong voice that cannot be silenced.

In October of the same year, Thunberg joined an online campaign in which Wong participated to demand the freedom of Hong Kong residents who tried to escape the city and found themselves imprisoned both for their attempt to escape and for their political dissent.

Joshua Wong, democracy activist and community organizer for South Horizons, stands outside the central government compound ahead of his candidacy for the 2019 District Council elections in Hong Kong on September 28, 2019 (PHILIP FONG / AFP via Getty)

Thunberg also stepped up his criticism of China’s appalling environmental record. In May of this year, Thunberg claimed that China’s dubious classification as a “developing nation”, despite being the world’s second-largest economy, was “no excuse to ruin future and present living conditions. “. Chinese officials regularly defend their prodigious pollution by asserting that the country is still “developing” and that only “developed” countries should act to limit greenhouse gas emissions.

Last month, in an interview with the BBC, Thunberg condemned the rapid expansion of China’s fossil fuel resources as “out of touch with reality.”

“I mean, it’s always someone who’s taller than you who you can blame.” And that’s why it’s more important that we have to work together internationally and globally to make sure everyone makes this transition, ”Thunberg said. “Not least, pushing China, which still builds coal – coal-fired power plants, which today is quite out of touch with reality if you ask me.”

The Chinese government-controlled media assaulted Thunberg as, among other things, an uneducated “clown” and “puppet” of the West. The remark of the “clown” appeared in the state newspaper World time in response to Thunberg’s support for Wong last year. 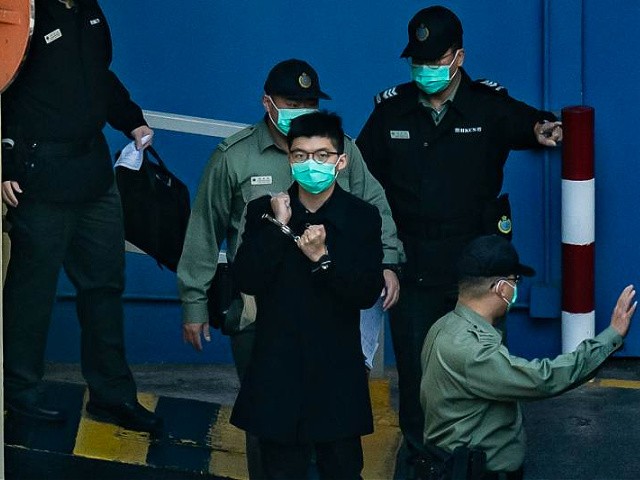 Pro-democracy activist Joshua Wong prepares to board a Correctional Service van in Lai Chi Kok before a hearing at the Lai Chi Kok Reception Center on December 18, 2020 in Hong Kong, China. Wong was charged with participating in an unauthorized rally during a protest against the anti-mask law. (Anthony Kwan / Getty Images)

Notoriously sexist China daily editor-in-chief Chen Weihua attack Thunberg at the time as “patheticAnd claimed that she had “no knowledge” of the situation in Hong Kong.

More recently, the World time responded to Thunberg’s BBC interview calling him uneducated for promoting “Fridays for Future,” which calls on students to skip school that day in protest.

“Thunberg, who skipped school for the so-called climate protests at age 15, has been described as a staunch environmentalist in the West. It is a very good tool to distract the public from the fact that the West is not doing enough to reduce emissions, ”the Minister said. Times wrote the propagandists. She was dubbed by the selective Chinese internet environmental activist and a ‘puppet’ of Western politicians after blaming China for the global climate crisis while turning a blind eye to Japan’s decision to dump nuclear wastewater in May . “

Twitter features hexagon profile pictures to show off Nfts; What they are and how to add | Local News