Girl, eight, died from ‘traumatic head injury’ when tree crashed onto her

Girl, eight, died from ‘traumatic head injury’ when tree crashed onto her in 60mph winds as she walked along footpath with friend who was flown to hospital with serious injuries, inquest hears

By Faith Ridler For Mailonline

An eight-year-old girl died from a ‘traumatic head injury’ when a tree collapsed onto her as she walked along a footpath with her friend, an inquest heard today.

Maisy Mayne was killed when she was struck by the fallen tree in a crop field in Bobbing near Sittingbourne, Kent on August 21.

Another child was flown to King’s College hospital in London with serious injuries after the branch came down amid high winds just after 12pm.

Winds reached speeds of up to 60mph around the time of the tragedy and the Met Office issued a yellow weather warning as Storm Ellen blasted Britain.

Opening an inquest today, assistant coroner Sonia Hayes said Maisy had sustained a traumatic head injury when the tree branch fell onto her.

She gave her cause of death as ‘severe head trauma.’

Maisy Mayne was struck by a fallen tree along a footpath in a field in Bobbing, near Sittingbourne in Kent (pictured)

Police had rushed to the scene alongside the South East Coast Ambulance Service, the air ambulance and Kent Fire and Rescue Service.

Emergency services were unable to save the eight-year-old and she was pronounced dead at the scene.

It is understood Maisy and her friend were walking with a woman when the freak accident occurred.

A witness told the Sun: ‘I heard this woman shouting as she came running across the field with no shoes on so I walked over.

‘She rushed towards me and was screaming for anyone to help. The woman started crying and said her niece had just been hit by a tree. 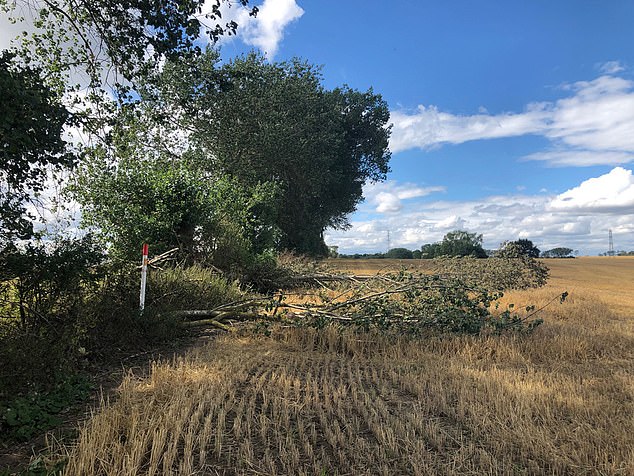 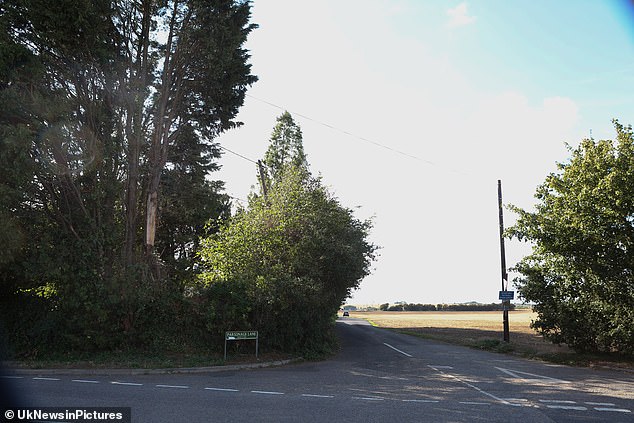 ‘I asked her if she was alright. She seemed very, very panicked. As I walked up and down trying to help her, at least 15 emergency service vehicles came flying past me.’

Floral tributes have been placed close to the spot where Maisy died.

A note left at the scene by her uncle read: ‘To my beautiful niece, I love you. May you rest in peace. Love your uncle and beautiful cousins.’

The exact circumstances of the death are still unknown, but will be uncovered in a full inquest in November. Police are not investigating the tragedy.

A Kent Police spokesman said: ‘We were called at 12.17pm on Friday to a report two children had been injured by a falling tree near Parsonage Lane, Bobbing.

‘One child was declared deceased at the scene and another child was airlifted to a London hospital with serious injuries.’

The inquest has been adjourned until November 17 at Archbishop’s Palace in Maidstone.