The Central Valley High school teenager was forced to shave his head and started crying in front of a crowd of students.

The children in the video can be heard using explicit language and telling the boy not to cry in Spanish. 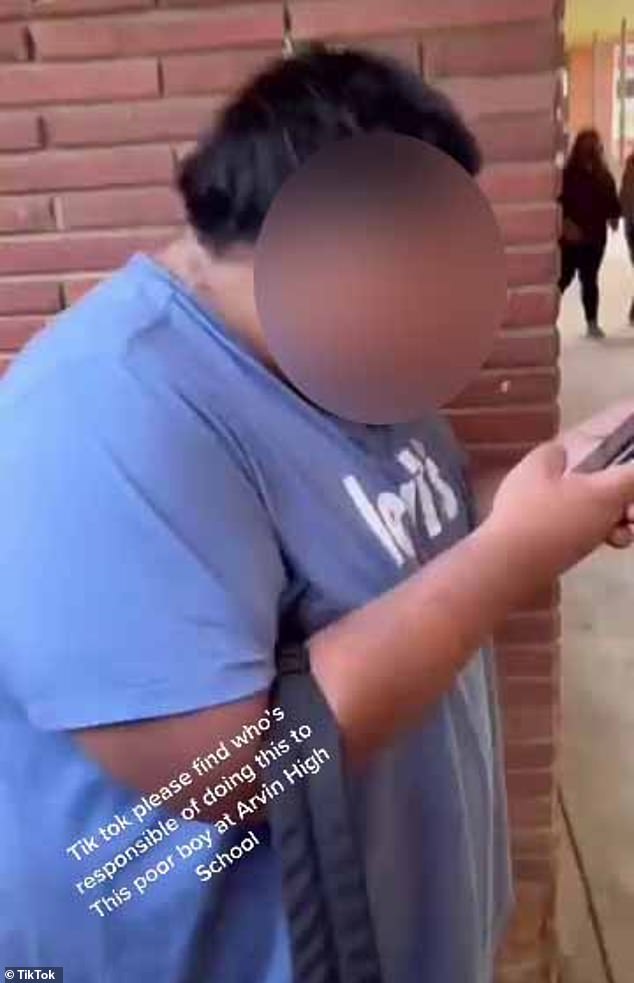 The boy was reduced to tears and community outrage led to questions about how the school in Central Valley, California deals with bullying. 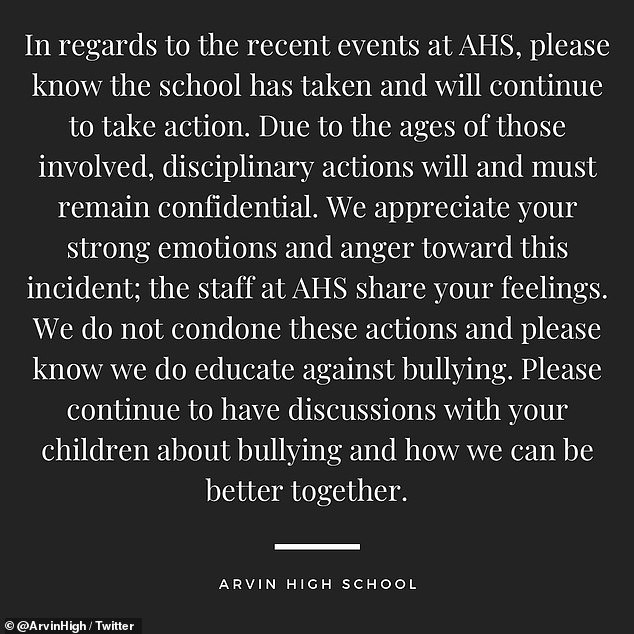 In a statement posted on social media, the school said it had been made aware of the incident and was following the process for disciplining students involved.

‘Arvin High School administration is aware of a video circulating on social media. The behavior displayed in the video is clearly unacceptable and we do not tolerate any form of bullying.

When students violate the boundaries of acceptable behavior, they will be held accountable for their actions and the school will provide support to any student involved. The incident is being thoroughly investigated and appropriate disciplinary action will be taken.

The boy’s mother, Avelina Santiago, told the station she wanted the bullies involved to be disciplined.

Speaking in Spanish at an anti-bullying rally outside the school on October 21, Avelina told reporters, “I’m destroyed.”

“My boy is a very nice person, he is very innocent. He just wanted to fit in and make friends. He wanted to be like everyone else,” she said.

Two of the school’s employees, including a security guard, were reportedly furloughed following the incident.

On Twitter, the school released another statement to the public:

“We appreciate your strong emotions and anger over this incident; AHS staff shares your sentiments.

“We do not condone these actions and know that we are educating against bullying. Please continue to talk with your children about bullying and how we can be better together,’ it read.

Santiago said she initially “felt alone” in her pursuit of responsibility for her son.

“But then I saw all the people who support me.”

She added that her son is doing well now and receiving support from his family.

Last Friday morning, the predominantly Spanish-speaking community gathered at Alvin High School to protest the administration’s response to the incident.

They chanted in English and Spanish “no más bullying” – no more bullying – outside the school. 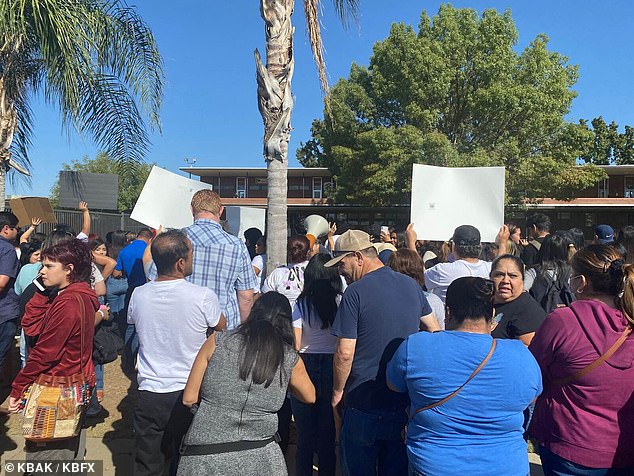 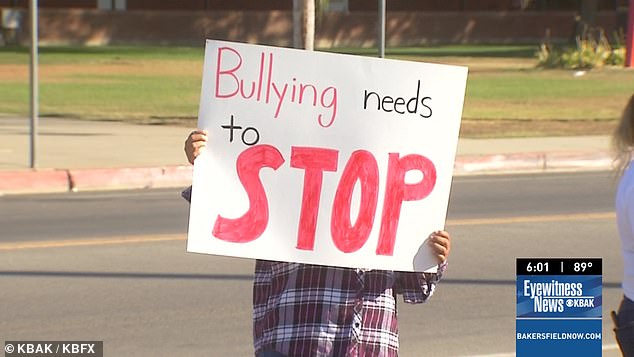 Many community members, including City Council member Daniel Borreli, were horrified by the video which circulated on social media and pledged to help the school resolve the incident appropriately. 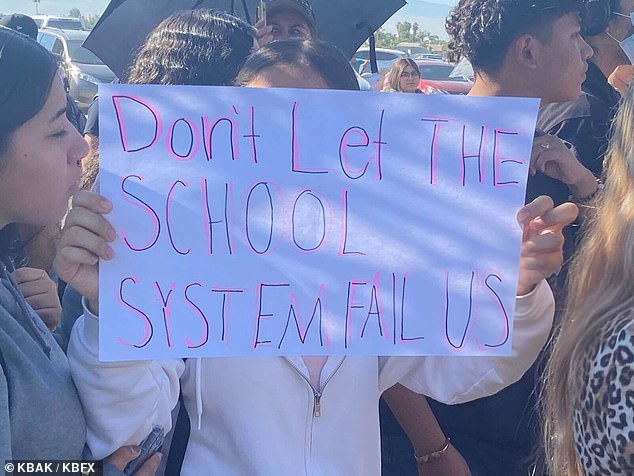 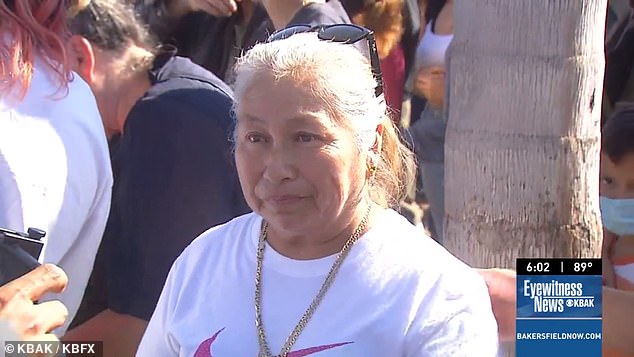 “I feel so sad, I was crying. I can’t believe this was happening to my grandson,’ said the boy’s grandmother, who was at the protest on Friday. 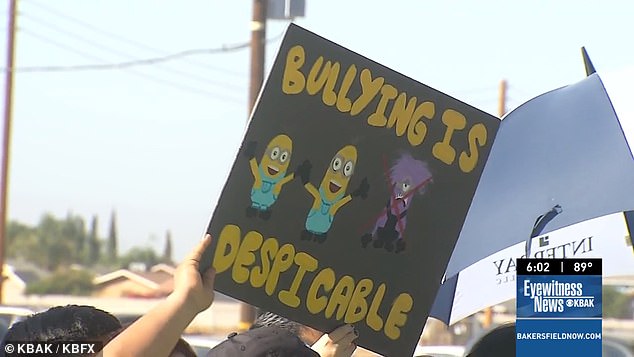 A number of signs were displayed at Alvin High School as members of the community rallied around the student with special needs and pleaded with the school not to let the bullying go unnoticed. 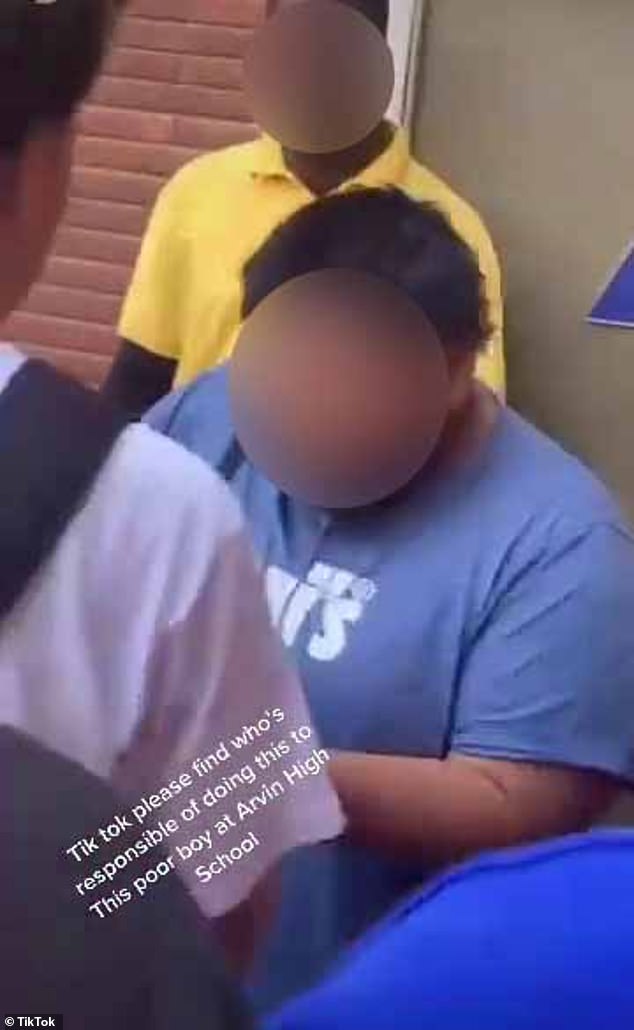 Other parents of children from the school were on hand to voice their concern.

Jesus Martinez, who has two children at school, said the video “went viral and everyone is heartbroken, there is a lot of concern”.

Referring to other parents in the crowd, he said: ‘We all want to protect our children. We want to send them to school to learn, not to get beaten up.

Parents have raised concerns that Arvin High is “tolerating bullying” and that the latest viral video was not an isolated incident.

Local business owner Abby Cortez said the protest happened “because nothing was being done”.

The protest finally ended when the school principal came out and engaged with the concerned parents explaining the investigation and disciplinary process.

“They’re working on, you know, getting all the (names) of the students from the video.” Arvin High School is trying to do its part from what we know now,’ she added.

Local city council member Daniel Borreli said he was “outraged” after seeing the video and promised his help in holding the school accountable.