A teenage footballer who mysteriously disappeared for two days has been charged alongside his best friend with the murder of his mother’s ex-boyfriend.

Gabriel Davies and Justin Yoon, both 16, allegedly stabbed and shot dead Daniel McCaw, 51, after forcing their way into his Washington home.

The children, who appeared in court yesterday, are accused of slipping into the property by crawling through a dog gate before carrying out the brutal attack.

Eerie security footage, which has not been released, reportedly shows the pair sneaking into the house before remaining inside for around 40 minutes.

Another clip would show halfway through the murder, with McCaw seen leaving his garage and “stumble” into his house.

Cops have yet to reveal the motive for the vicious execution, which left the victim with a bullet hole in the head, multiple stab wounds and lying in a pool of his own blood.

But Davies’ father claimed his son was forced by mobsters from the victim’s former motorcycle crew to steal from the house.

He claimed the thugs beat his boy – smashing his face into his own truck – before driving him into another car and stealing his shirt and shoes. 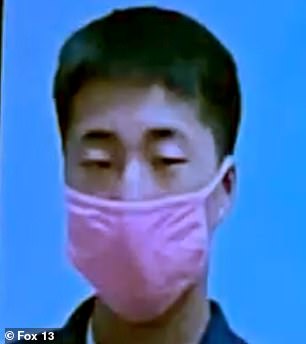 Gabriel Michael Davies and his friend Justin Jiwoon Yoon, both 16, are charged with second degree murder, burglary and unlawful possession of a firearm in connection with the death of Daniel McCaw, 51, who had formerly dated Davies’ mother and lived with the family 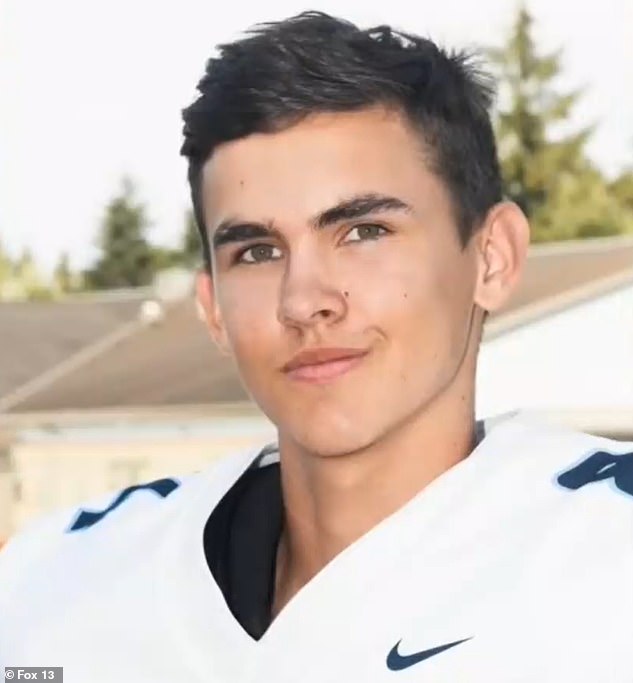 Davies was reported missing on August 31, after he failed to show up for football practice at the local high school, sparking a massive two-day manhunt. 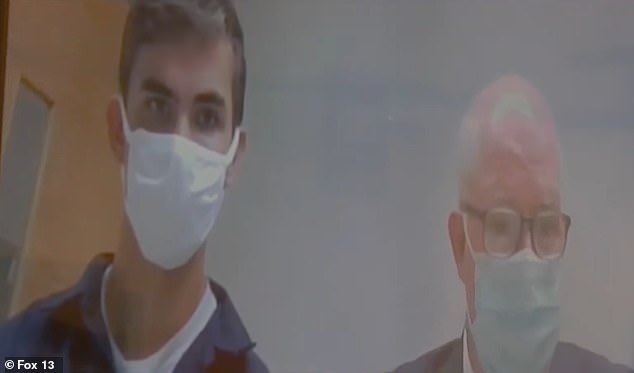 Both suspects are charged as adults with the murder of Daniel McCaw. The young footballer is pictured with his lawyer 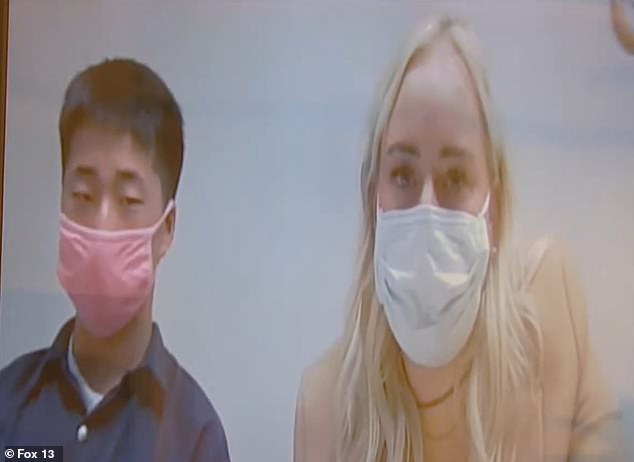 They both pleaded not guilty to the charges and are being held on $1million bail each, after lawyers argued they were at risk of fleeing given Davies had already ‘arranged a disappearance’.

Davies and Yoon are charged as adults in the Aug. 28 murder and were arraigned in a Washington court on Tuesday.

The charging document says the two teenagers, from Olympia, Washington, snuck out of their cabin at Panther Lake – where they were staying with friends and family.

They reportedly snuck up to McCaw’s home in Orting and quietly approached through the backyard around 2 a.m.

The children are accused of then breaking into the house by crawling through a dog door, which was large enough to accommodate a German Shepherd who was inside.

At 2:48 a.m., according to Pierce County detectives, two “thin young men” they believe to be Davies and Yoon were seen exiting the house through a side door.

But they then drove back and forth to the garage before fleeing the area around 2:52 a.m., the charges say.

Davies was eventually reported missing after failing to show up for football practice at the local high school, sparking a massive two-day manhunt.

But just a day after he disappeared, sheriff’s deputies found McCaw dead at his home and learned he was his mother’s ex-boyfriend.

A medical examiner has since concluded that the victim was shot in the head and another in the chest.

He also appeared to have multiple stab wounds to his abdomen when he was found, FOX 13 reports. 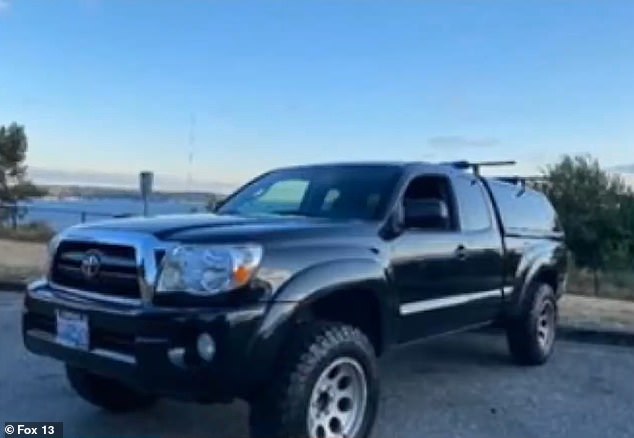 Authorities later found his vehicle abandoned near Millersylvania State Park with bloodstains and a broken cellphone on the ground.

Authorities said cops arrived at McCaw’s home around 9:30 a.m. on September 1 to conduct a welfare check, after he had not reported to work for four days.

When they arrived, KIRO 7 reports, deputies smelled what they thought was a decomposing body and soon saw a German Shepherd running inside the house and out into the backyard through a door to dog.

Deputies were quickly able to gain access to the home through an unsecured laundry room door.

Once inside, authorities found McCaw dead on the floor with a gunshot wound to the head and a significant amount of blood surrounding the body.

They initially ruled his death a suicide as there was no sign of a break and enter, but no firearms were found at the crime scene and further investigation revealed he had also been stabbed.

Meanwhile, authorities across the state were also looking for Davies after he failed to show up for football practice.

They later found his vehicle abandoned near Millersylvania State Park with bloodstains and a broken cellphone on the ground.

Davies was found around 10 p.m. Thursday night on Tilley Road. He was arrested the following day in connection with McCaw’s death. 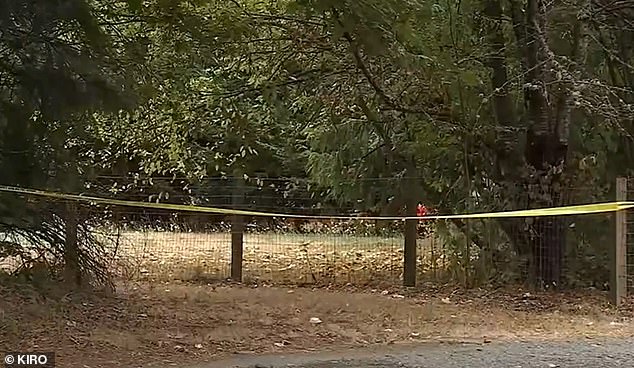 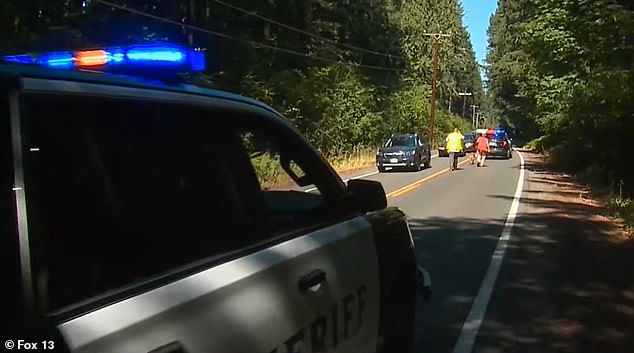 When deputies responded to the scene on September 1, they smelled what they thought was a decomposing body

Investigators investigating Davies’ disappearance had apparently spoken to members of his family, who said he and Yoon were camping with friends and family at Panther Lake from August 27-28.

They left the cabin on August 28 – the day McCaw was allegedly murdered – just after midnight, the Davies family told investigators, and returned around 6:30 a.m.

The suspects appeared to be wearing gloves and carrying something away from the scene.

Authorities now believe those suspects are Davies and Yoon, who then ran to their cabin.

But Davies’ father told authorities his son was approached by McCaw’s “biker buddies”, who threatened Davies with stealing something from the victim’s home.

Davies then confided in Yoon, according to his father, and the two developed a ‘plot’ to steal the items from McCaw’s safe – the location of which Davies knew due to his mother’s previous relationship with the victim.

His father goes on to claim in court papers that when the victim came home on August 28, Yoon “ran after him and stabbed him” and then “Gabe heard a gunshot.”

Davies then went to the garage to get the item out of the safe when he heard a second shot, his father said.

As they left, his father claims, Davies was followed by McCaw’s “biker buddies”, who pulled him from his truck on Tilley Road.

The blood found in the truck, his father said, came from the bikers who smashed his son’s face against the inside of the truck.

The so-called “biker buddies” then drove Davies into a Suburban, according to his father’s account of the incident, brutalizing him before letting him go. They also reportedly took his shirt and shoes.

Davies and Yoon are charged with second degree murder, burglary and unlawful possession of a firearm. Both suspects pleaded not guilty.

They were being held at Remann Hall Juvenile Detention Center on $1million bail each after lawyers argued they were at risk of fleeing.

Not all news on the site expresses the point of view of the site, but we transmit this news automatically and translate it through programmatic technology on the site and not from a human editor.
Tags
boyfriends broke Dog door footballer House mums shooting
Facebook Twitter LinkedIn Tumblr Pinterest Reddit VKontakte Odnoklassniki Pocket