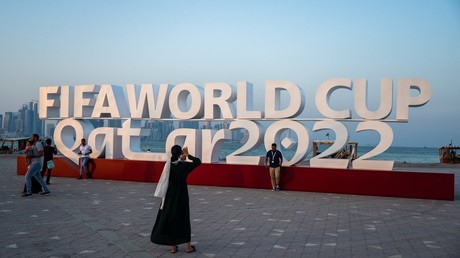 The Emir of Qatar castigates a campaign of “slander” against his country in the run-up to the World Cup. In addition to the scandal of foreign workers who died on construction sites, Doha is accused of not respecting LGBT and women’s rights.

Less than a month from the competition, the Emir of Qatar castigated on October 25 an “unprecedented” campaign against the organization of the Football World Cup by the rich Gulf state, denouncing “slander” reports the Qatari channel AlJazeera.

According to the firm Deloitte, the small gas emirate would have spent no less than 156 billion dollars to host the tournament from November 20 to December 18. But Doha is regularly questioned on the non-respect of human rights and the logistical problems for the reception of supporters.

“Since we had the honor of hosting the World Cup, Qatar has been the target of an unprecedented campaign, which no other host country has suffered,” he said during the interview. a speech before the Legislative Council in Doha.

Since Fifa awarded the World Cup to Qatar in 2010, the first Arab country to organize the event has been constantly criticized in the West for obtaining the competition, with accusations against Michel Platini, for the treatment of foreign workers, LGBT rights, or the more than controversial use of air conditioning in its eight stadiums, which cost 6.75 billion dollars.

The government has also firmly denied a report by the organization Human Rights Watch (HRW) accusing the Qatari police of having arbitrarily detained and mistreated members of the LGBT community.

“Initially, we treated this subject in good faith, and we even considered that certain criticisms were positive and useful, helping us to develop aspects which were necessary”, conceded the emir.

“But it soon became clear to us that the campaign persists, expands, there is slander and double standards, reaching a level of relentlessness that has left many wondering, sadly, on the real reasons and motivations of this campaign”, he lambasted.

For the small emirate of just under three million inhabitants, which expects more than a million foreign supporters for the World Cup, this event is an opportunity to show “who we are, not only the strength of our economy and our institutions, but also our identity,” said its leader.

“It’s a great test for a country the size of Qatar which impresses the whole world with what it has already achieved,” he said.

Homosexuality is illegal in this very conservative country and women face many restrictions. As for supporters, many complain about the high prices of accommodation in Qatar or the restricted access to alcoholic beverages in the fan zones alone. Moreover, the price of a pint of beer could be around 17 euros.

But the Gulf state, one of the world’s leading gas exporters, is mostly criticized for forced-march construction by tens of thousands of immigrant workers from Asia, Africa and the Middle East in grueling conditions, sweltering temperatures and very low wages, documented by unions and NGOs. Indeed, since the investigation of The Guardian of February 2021, which puts forward the figure of 6,500 dead foreign workers, Qatar is in the sights of several NGOs.

Human rights organizations such as HRW and Amnesty International have called on Qatar and Fifa to create a compensation fund for workers who are victims of the World Cup construction sites, and to provide it with 440 million dollars, the equivalent of sports endowments promised to the 32 selections aligned.

Qatar, however, claims to have carried out many reforms in recent years. Doha thus implemented in March 2021 a minimum wage of 1,000 riyals per month, or 240 euros, plus 300 riyals in allowances for food and 500 for housing. In addition, Qatar is said to have abolished Kafala, a quasi-slavery sponsorship system, which forced workers to surrender their passports to the authorities when entering the country and to have their boss’s authorization to leave the territory or change jobs. .

Efforts remain to be made, however, in terms of their application, said the General Secretary of the European Trade Union Confederation, Luca Visentini, during a visit to Doha.

“The World Cup was undoubtedly an opportunity to accelerate change,” he told AFP. “These reforms can be a good example for other countries hosting major sporting events,” he said.

Fifa leader Gianni Infantino has made the case for Qatar, saying the World Cup will be “the best ever, on and off the pitch”. Close to Doha, former French President Nicolas Sarkozy also defended the organization of the World Cup. “Football does not belong only to Westerners,” he declared on 23 October.

Power cut: a new website to warn you – France

Press conference by Russian Minister Lavrov and his Azerbaijani counterpart