Chaotic delays at Australia’s biggest airports continue for a third day in a row as the school holidays begin and Covid-stricken airline staff struggle to cope.

School holidays in NSW and Victoria began on Saturday and families had a frustrating start to their breaks with more delays of up to two hours at major airports in Sydney, Melbourne and Brisbane.

Passengers who arrived at 5.30am for 7am domestic flights in Sydney on Saturday were greeted by the crowded terminal with people growing frustrated with long, slow queues.

On Thursday and Friday, check-in queues stretched up to 1km long in scenes not seen at Sydney Airport in years.

The airport chaos repeated itself on Saturday as the public rediscovered the travel bug at the same time as airlines grapple with Covid-affected workforces.

“First day of our first vacation in over 2 years is going great,” Sydneysider Penny tweeted from a crowded home terminal.

‘Who at Sydney Airport woke up one morning and said ‘we won’t need to look at peak capacity for Easter school holiday travel’ and then went back to sleep? Do better!’

Another traveler, Luke, noted that he only saw two members of staff helping navigate the sea of ​​waiting people that had already formed by 6am.

The airport chaos repeated itself on Saturday as the public rediscovered the travel bug at the same time as airlines grapple with Covid-affected staffing (pictured, passengers queuing at Sydney Airport) 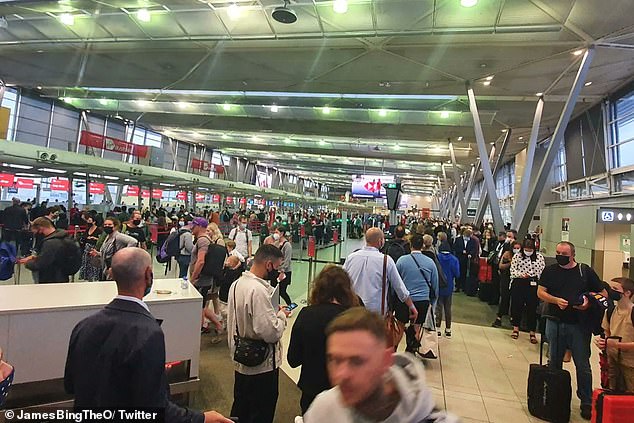 On Thursday and Friday, check-in queues stretched up to 1km long in scenes not seen at Sydney Airport in years.

The delays were also happening in Brisbane and Melbourne.

“It’s not good in Tullamarine either. Had to wait 75 minutes for luggage, excuse given “labour issues”. Not good enough Qantas.

Brisbane Domestic Airport was also frantic, experiencing its heaviest day of passenger traffic in two years on Friday, with 51,000 people using the terminal.

It was feared the chaotic scenes could continue until next week, with Easter starting next weekend.

Melbourne Airport has taken to social media to warn travelers to arrive three hours earlier for international flights and two hours before departure for domestic flights.

That’s an hour earlier than usual recommended arrival times – but even that didn’t seem to alleviate delays with crowded terminals leading to frayed tempers.

The delays are caused by a combination of an increased desire to travel, a reduction in staff, partly due to the Covid-affected workforce, and what Qantas chief Alan Joyce has called the passengers not being “in good shape”.

On Friday, he claimed many were not properly prepared for security scans, such as forgetting to remove spray cans and leaving laptops in cases, which slowed queues.

Some passengers who saw the Qantas CEO in transit noted that he appeared to skip queues, only worsening their mood. 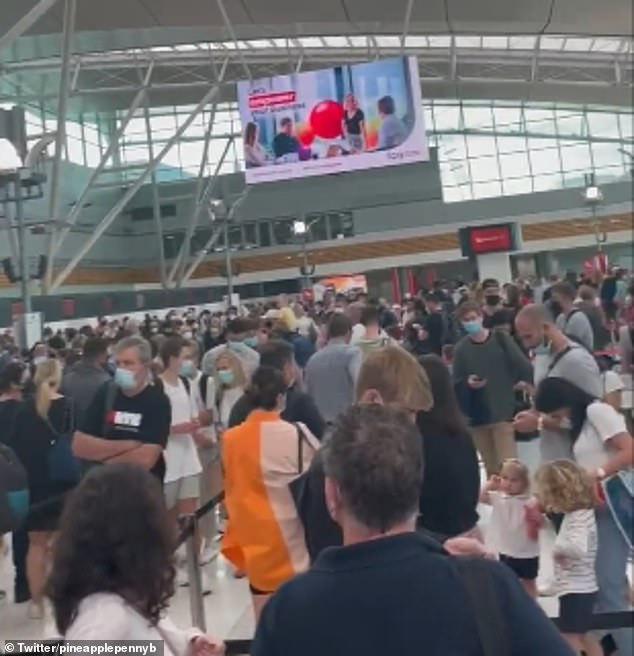 The chaotic scenes at the airport were feared to continue until next week with Easter starting next weekend (pictured, Sydney Airport)

Joyce then backtracked, saying he had no intention of blaming the passengers.

Qantas has also faced renewed criticism on social media over job cuts it has made during the pandemic.

The airline laid off 2,000 ground staff – baggage handlers and cleaners – in 2020 and was taken to Federal Court by the Transport Workers Union.

On social media, some observers said they would rather take a 10-hour drive or eight-hour train ride than the chaos in airport terminals this week.