La Caja Magica in the Spanish capital was the scene for the new season-ending Davis Cup Finals event which featured 18 teams.

Great Britain’s captain Leon Smith had previously led his team to glory in the competition’s old format in 2015. An unforgettable run that saw Andy Murray inspire the nation to their first title since 1936.

The squad of Dan Evans, Kyle Edmund, Andy Murray, Jamie Murray and Neal Skupski were pitted against Netherlands and Kazakhstan in Group E.

Andy Murray opened things up and although he won an epic opening rubber against Dutchman Tallon Griekspoor, his fitness wasn’t quite at the level he wanted it to be. Then Evans fell to Holland’s former world No 33 Robin Haase to send the tie into a deciding doubles rubber. It was left to Jamie Murray and Skupski to seal a 2-1 victory.

On Day Two they reached the knockout stages thanks to a 2-1 win over Kazakhstan. Edmund replaced a fatigued Andy Murray to win his rubber before Evans fells to defeat against Alexander Bublik. It was a case of déjà vu for Jamie Murray and Skupski as they stepped up to the task to seal GB’s route through to a meeting with Germany.

Evans steps up to the mark

When the chips were down Smith’s men produced the goods to beat the Germans 2-0 thanks to wins for Edmund and Evans.

British No 1 Evans stepped up to the mark when it mattered most to come through an epic three-set battle against Jan-Lennard Struff and set up a semi-final date with hosts Spain.

The semi-final had pretty much everything you could have wished for. After Edmund continued his wonderful form on a packed Centre Court at Caja Magica to defeat Feliciano Lopez, Evans fell to Nadal in straight sets, despite pushing the world No 1 in the opening set. It was left to an inspired team of Lopez and Nadal to win a dramatic deciding rubber against Jamie Murray and Skupski to send Great Britain packing.

Spain went on to win their first Davis Cup title since 2011 and their sixth overall after defeating Canada in the final but it was that epic semi-final which Evans remembers most fondly.

“It was obviously a good experience and it was a great atmosphere but obviously we were 1-0 up so it wasn’t such a bad match for me to play (against Nadal) really,” he said.

“Then it was a tough doubles which was really good to watch and be part of because of the amazing atmosphere. I thought the boys were really unlucky to not at least take it to a third set in the end.”

Rafa from another planet

Nadal was playing tennis from another planet during that thrilling doubles contest against Jamie Murray and Skupski. The Spaniard pulled off miracle shots one after another to leave the crowd in amazement at what they were witnessing.

“I mean, Feli (Lopez) played well, but I think it’s fair to say Nadal took over the court. He hit a massive forehand on set point as well,” Evans recalls.

“As I said, I thought the boys were really unlucky and I think they wouldn’t mind me saying that was some of the best tennis they’ve ever played, I think anyway. It was a nerve-racking match to watch from the sides, but also pretty good to be part of. It was probably one of the best atmospheres I’ve been involved in.

“It was difficult to take but I thought the boys did themselves proud and they did Great Britain proud.” 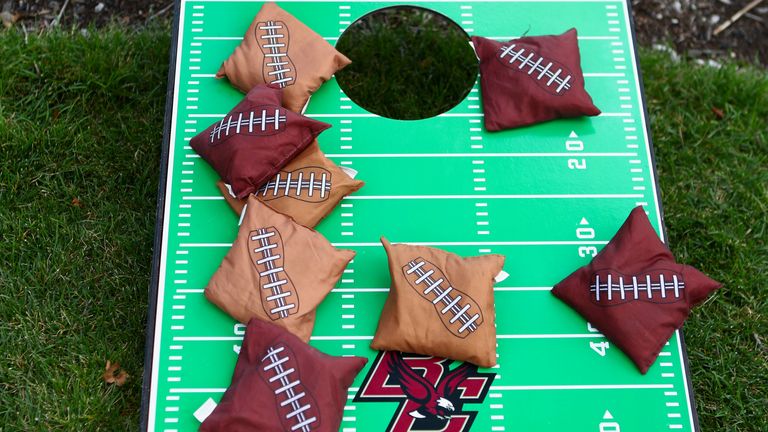 “It gets everybody into it and keeps everybody out of their rooms a little longer because in a normal tournament you’re in your room a lot so it’s good that we found a game which everybody enjoys and can hang out and play.”

An essential part of any team tournament is the bonding and in Great Britain’s case it was cornhole that brought them together.

It’s an American game in which players take turns throwing 16 ounce bags of corn kernels at a raised platform [board] with a hole in the far end. Fun, right?

Skupski summed it up in an interview with Sky Sports, when he said: “It sounds like a terrible game, but it can get quite rowdy.”

Evans said: “It sort of became something we ended up playing all the time. I’m not sure how it got started but it suddenly became a pretty stupid thing to do every night for hours.

“It was good because everyone can join in, including the staff. Relatively speaking you don’t have to be too skilful at it so it was good fun. It gets everybody into it and keeps everybody out of their rooms a little longer because in a normal tournament you’re in your room a lot so it’s good that we found a game which everybody enjoys and can hang out and play.”

For a player who is not afraid of showing his competitive nature on the court, Evans admits he wasn’t actually any good at cornhole.

He said: “Some of the staff were very good at it like Nick Weal, who won nearly every single time. Tournament’s like this are great for team spirit leading into tournaments to get to play on the tour and it makes things a lot easier for events like Davis Cup so it’s not so strange when you start spending a lot of time around each other again. They can only help future players coming up as well.”

Break Point: A Davis Cup Story will be available for free on Rakuten TV from November 26.