Victorian police have hit threatened to arrest Sam Newman and throw him in jail for calling on fellow Melburnians to take to the streets to protest Stage Four lockdown.

Police said they are already investigating the 300-game AFL champion and former Footy Show host and others for inciting Victorians to take to the streets against the controversial lockdown – which isn’t due to end until September 13.

Newman issued his extraordinary call on Sunday after anti-lockdown protesters clashed with police in a dramatic stand-off in Broadmedows, in the city’s north.

‘Of all the protests that we have put up with, how about a quarter million of us gather in the CBD to take the City/State back, before EVERY previous march will have been pointless,’ Newman tweeted on Sunday night.

‘And hopefully a state day of coordination. Any takers? #StateofSurvival.’

After one Melburnian suggested Newman had ‘incited a riot’ with his comments, he added: ‘There’ll be no rioting. No looting. No arson. No violence. Just an expression of desperation for our sanity.’

The tweet sparked 1000 likes and hundreds of comments on a day Victoria recorded  114 new cases and another 11 deaths.

‘That’s someone who was running for Melbourne mayor. If you want to be in lockdown for another six months then sure – join the protest.’ 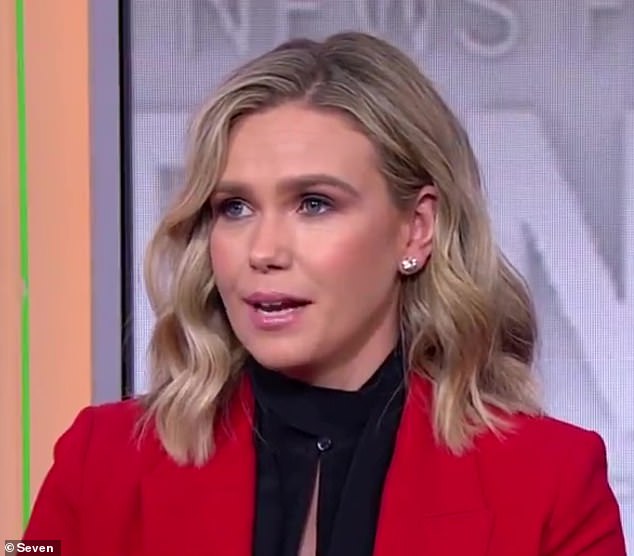 But fellow Melburnians desperate to regain their freedom joined the bandwagon.

‘Just tell me when and where never protested before but this is the most important thing we have faced in my lifetime. We ordinary Victorians must take our state back,’ one man wrote.

Another added: ‘A protest at some point needs to happen so our political class can get a sense of the real opposition to the unbalanced measures put in place.’ 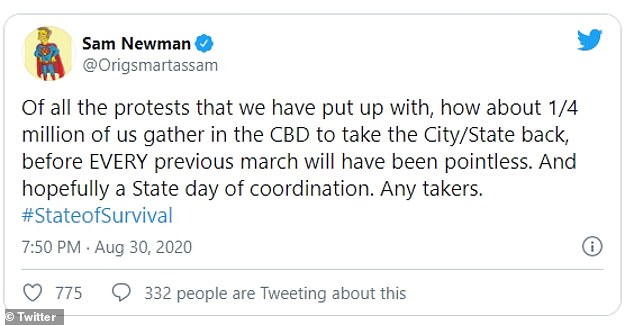 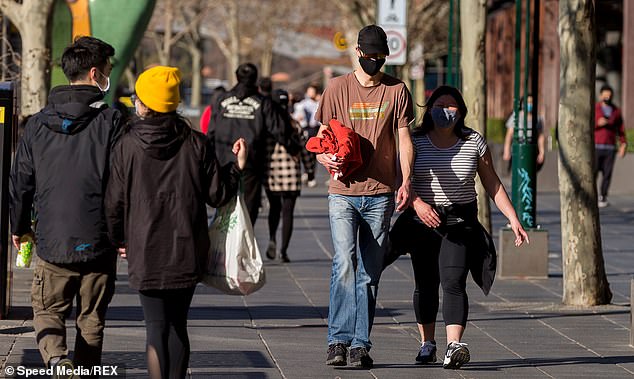 Melburnians were out and about enjoying the weather on Saturday, despite stage 4 lockdown

Another fan commended Newman on his wording.

But not everyone supported Newman.

‘I have read your tweet three times and it’s still incomprehensible. But good luck with whatever self-indulgent, poorly conceived action you’re proposing,’ one woman posted.

Another added: ‘Of all the things you have said, this is highly irresponsible, you know your position, is this what the would want posted, it’s with these people’s lives that you earned your living.’ 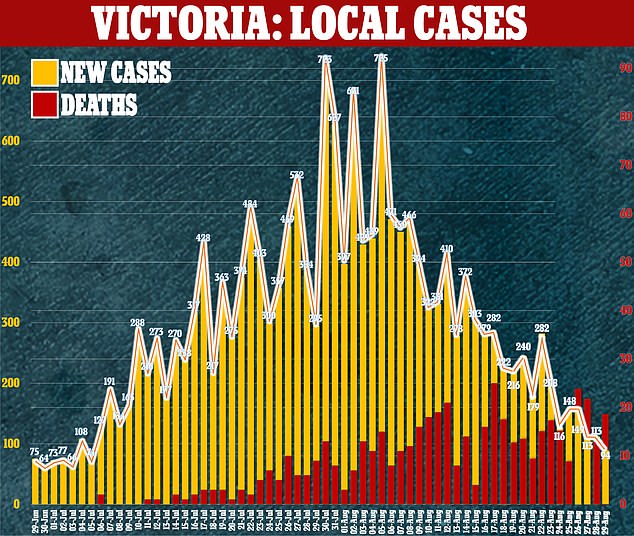 Others warned Newman to expect a knock on the door from Victoria Police.

Another added: ‘Careful Sammy. You will have 10 police cars at your door for that tweet.’

Metropolitan Melbourne is subject to stage four restrictions including an evening curfew and a ban on travelling beyond a five-kilometre radius of home until at least September 13 amid reports strict lockdown measures will be extended.

Regional Victoria is under stage three restrictions which allows residents to leave home for essential purposes. 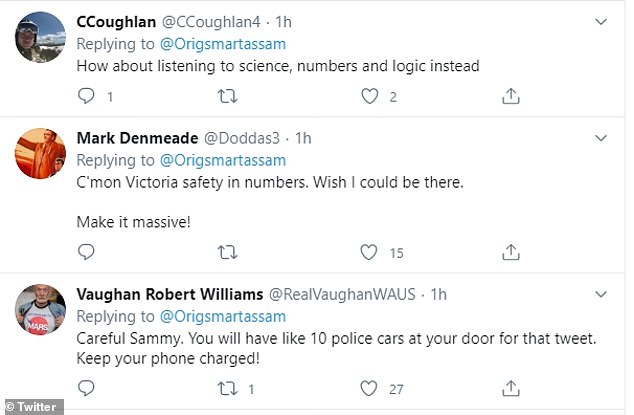 Earlier on Sunday, the premier left Victorians furious when he repeatedly spruiked a mysterious ‘plan’ out of lockdown.

‘Now, there will be a plan. It will come soon.’

The premier fears new cases numbers would ‘explode’ again if restrictions are relaxed too soon.

‘Once we see these numbers fall further, once we have certainty – and that will be quite soon – we will be able to talk in more definitive terms about what the weeks and months ahead look like,’ Mr Andrews said. 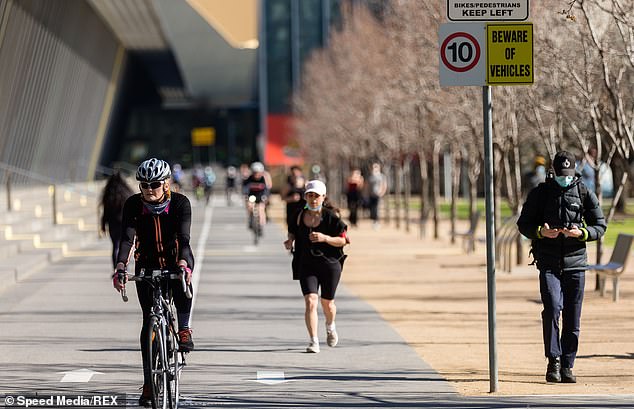 On Sunday night, confronting footage taken in Broadmeadows, in Melbourne’s north, showed dozens of men dressed down in tracksuits and masks making their way through the streets as traffic was brought to a standstill.

The protesters claimed, when asked, that they were simply getting their daily exercise, which they are permitted to do within a five kilometre radius on their homes.

At least six people were arrested during the protests and police have not ruled out issuing further infringement notices. 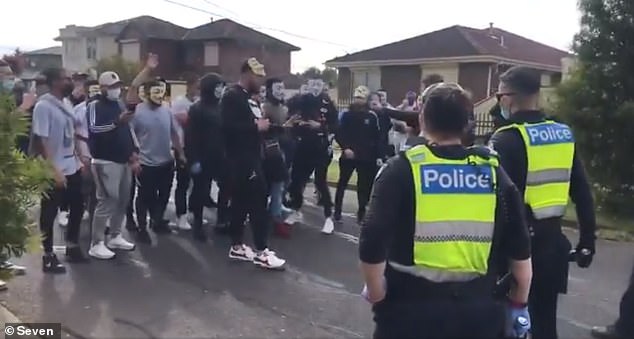 Victoria’s stage four restrictions are due to end in two weeks, but the Premier has indicated they will likely be extended. Pictured are anti-lockdown protesters clashing with police in Melbourne’s north on Sunday night 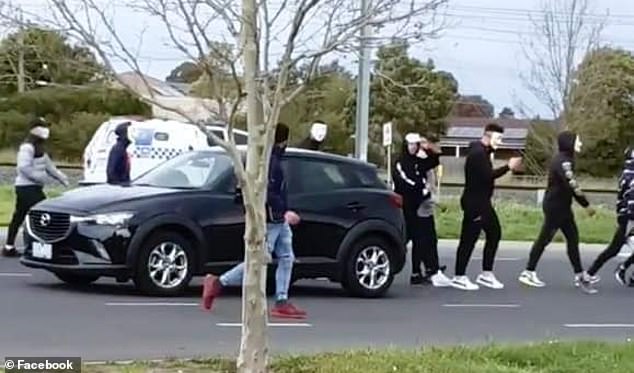 The protesters claimed, when asked, that they were simply getting their daily exercise, which is one of just four legal reasons to leave home in Melbourne

Tensions in Dandenong had been flaring for days after a large group of residents decided to start walking at the same time and place. 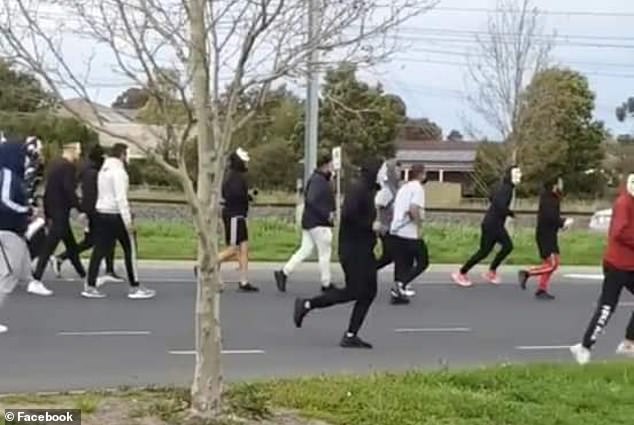 Confronting footage taken in Broadmeadows, in Melbourne ‘s north, showed dozens of men dressed down in tracksuits and masks making their way through the streets as traffic was brought to a standstill