The White House’s hands are tied when it comes to opening up access to abortion in states that banned the medical procedure after Roe v. Wade, Health Secretary Xavier Becerra admitted on Sunday.

President Joe Biden and his administration have sparked outrage among Democrats nationwide over the Supreme Court’s decision to strip federal abortion protections.

Homeland Security Secretary Alejandro Mayorkas, another member of Biden’s cabinet, warned on Sunday that heightened tension over the decision had “enhanced the threat environment” around the Supreme Court and its justices and officials. their families.

It comes after his department sent several warnings indicating an increased likelihood of violence from anti-abortion and pro-choice sides in the wake of Roe’s overthrow.

But there is apparently little the White House can do to mitigate the fallout, Becerra suggested on NBC News’ Meet The Press, as criticism mounts on the president’s party for not acting sooner to protect the public. abortion rights.

“But we will continue to find every possible avenue to ensure women have access to the care they need, including abortion care.”

Health Secretary Xavier Becerra has suggested the White House’s hands are tied when it comes to expanding access to abortion in states that have already banned it. 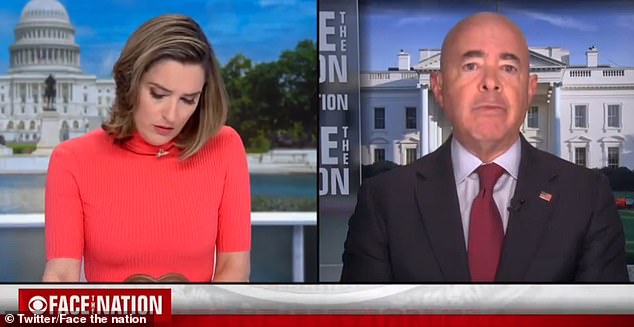 When asked if the White House would heed progressive calls to open abortion clinics on federally owned land in states where it has already been banned, the health secretary suggested the idea was already ignored.

“The difficulty is that just because it’s an idea doesn’t mean it can be put into practice.” And so what we want to make sure is that we can put things into practice,” he said.

Becerra’s message to congressional Democrats asking Biden to do more was clearly: “Give us some good ideas.”

“We will explore everything we can. And I would also ask them to please pass a law,’ the former California House Democrat said.

“They have it in their power, if they can find the votes to actually codify the Roe decision, which is what we need more than anything else.”

Meanwhile, the Department of Homeland Security (DHS) appears to be proactively monitoring potential threats that stem from the Supreme Court’s decision in late June.

Speaking to CBS News’ Face The Nation on Sunday, Mayorkas referred to a bulletin sent out by DHS in early June.

DHS had issued an “increased threat advisory” on Tuesday, warning of an increased risk of “massive violence” nationwide, fueled by extremist ideologies and personal beliefs. Late last month, the Supreme Court instantly changed the landscape of women’s reproductive health by striking down the constitutional right to abortion

The annulment of Roe v. Wade “enhanced the threat environment,” DHS Sec. Mayorkas tells @margbrennan while saying his department has “deployed resources to ensure the safety and security of the Supreme Court and justices.” pic.twitter.com/pi9dVw889b

The bulletin cites “pro-abortion and anti-abortion advocates” who have publicly “encouraged violence, including against government, religious and reproductive health care staff and facilities, as well as those with opposing ideologies. “.

Mayorkas said on Sunday, “We’ve seen an increased threat environment over the past few months on a number of different volatile issues that are galvanizing people on different sides of each issue.”

He said his department becomes “involved when there is connectivity between opposition to a particular viewpoint or ideology of hate, false narrative, and violence.”

“We are very aware that the Supreme Court’s decision to quash and overturn Roe v. Wade has really heightened the threat environment,” Mayorkas continued.

“We have deployed resources to ensure the safety and security of the Supreme Court and the justices.”

This includes personnel deployed for the safety of judges and their families.

“We do not condone violence and law enforcement will and have responded to acts of violence when people do not honor their freedom to protest peacefully, but rather violate the laws of our country and its constituent states” , said Mayorkas.