By Hope Smith for Dailymail.Com

At least seven people have died in an early morning fire at a Wisconsin apartment building.

The fire started at 5:11 a.m. Friday in the 700 block of Mansfield Court in Hartland, about 26 miles from Milwaukee.

According to CBS 58, at least 15 fire departments and nine police departments were called to the scene for the blaze.

The group of first responders were unable to save at least seven people inside what some described as a duplex.

This is the “four family apartment building” where seven people were killed in a fire early Friday morning in Hartland, Wisconsin 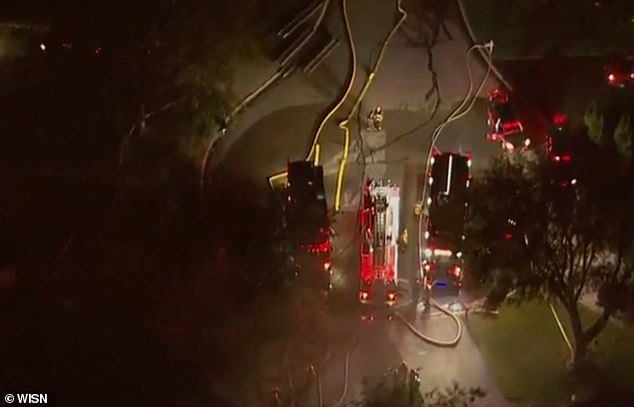 Elaine Rojas-Castillo with ATM4 spoke with a neighbor who said they heard a loud boom before firefighters were called to the scene.

A reporter inside the helicopter said he also observed heavy smoke coming from the house.

“We have received reports of a fire in a four apartment building,” Misko said at the start of the briefing.

The police chief said officers and firefighters were greeted with “a large amount of fire” as soon as they arrived.

During the rescue process, Misko said they attempted to rescue people inside the building and some who were “on the balconies” in hopes of being rescued.

It is unclear how the fire started, but police said they have opened a criminal investigation.

The Wisconsin Fire Marshal’s Office was also called in to help with the case, Misko confirmed, along with the Waukesha County Sheriff’s Department, the Wisconsin Crime Lab and several other agencies.

“This is a tragic incident for the residents and the community involved,” an officer said at a news conference this morning.

DailyMail.com spoke to a representative from the Hartland Village Police Department who confirmed that as of noon Eastern Standard Time, police and firefighters were still at the scene.

This is a developing story

Woman claiming to be a relative of Chris Christie injures 6 deputies after being kicked off plane, sheriff’s office says