The tent city for illegal immigrants built in New York still appears to have no occupants, according to a Breitbart News investigation – limited by the area reserved for the press.

The lavish tent structure built on Randalls Island, across the East River from Harlem, looks set to accommodate hundreds of tenants, with beds set up, each paired with a blanket – however, it doesn’t appear there’s no one sleeping on it.

Beds are seen in the dormitory during a tour of the Randalls Island Humanitarian Emergency Response and Relief Center on October 18, 2022 in New York City. (Michael M. Santiago/Getty Images)

The New York Post reported that “a first wave of 500 single men” were set to move in on October 19, where they would receive “plush laundry service” and be able to play Xbox. But a walk around the perimeter of the makeshift accommodation on October 24 did not appear to show anyone living there. 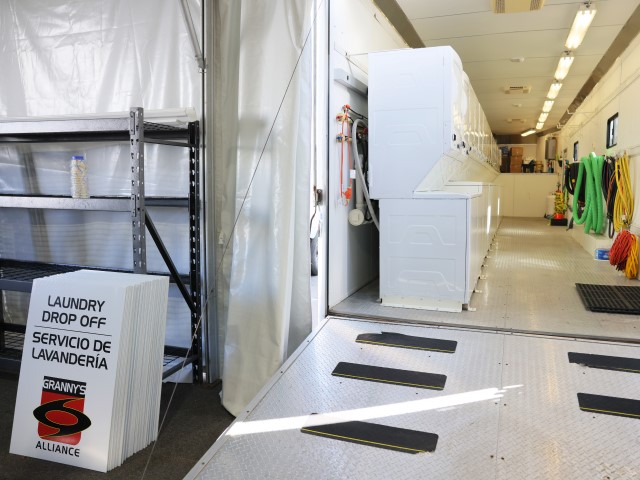 Washers and dryers are seen during a tour of the Randalls Island Humanitarian Emergency Response and Relief Center on October 18, 2022 in New York City. (Michael M. Santiago/Getty Images)

Breitbart was told by a local man who said he was a contractor that the area was “not ready yet” to welcome new residents to the city.

The area – dubbed “Adams Tent City” for some time on Google Maps – is still denied press access for unknown reasons. A contracted security guard at the gate said Breitbart’s press was not allowed in for the “security” of illegal immigrants, although no one appeared to be there at the time of the conversation.

Breitbart asked City Hall if there is a firm plan to move people in by a certain date, how much the tent city is costing taxpayers and if there is a plan for where people will be moved in a month or two. , when temperatures drop to freezing point – but they didn’t react.

During a tour of the facility with the press led by city officials last week, New York City Emergency Management Commissioner Zach Iscol bragged that the facility would serve of “culturally appropriate” food — “South American fare” — but did not give a full account of how much it will all cost, according to the Post.

Emma-Jo Morris is the political editor of Breitbart News. Email him at ejmorris@breitbart.com or follow her on Twitter.