Dashcam footage of a horrific accident has divided Australians with a hidden detail that has sparked debate over which driver is to blame.

The video shows a white van turning right in front of a car that was on a green light and crossing an intersection in Derrimut in Victoria on Sunday.

But rather than slowing down when the van runs through a red light, the car appears to be speeding up, leaving social media users perplexed. 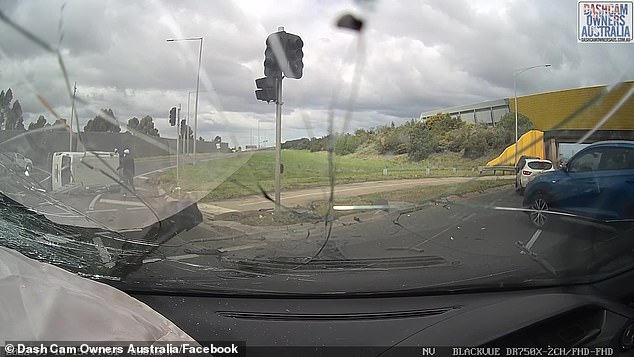 The footage was shared on the Dash Cam Owners Australia page and as many started blaming the two drivers, the page and other users pointed out that the angle of the video would have been very different from the drivers’ actual point of view .

“The dash cam does not have the same view as the driver and it is entirely possible that drivers will see the van aligned with the A pillar of their vehicle,” said a commenter on the Dash Cam Owners page. Australia.

Although the angle is potentially obscured, many still criticized the driver.

One said the driver sped through the green light like a race car driver while another said a trip to have his eyes tested should be on the agenda.

‘0 to 43 km/h before impact. You left the line with quite a few sends…but, if the van hadn’t turned red, you wouldn’t have touched it…but, if you hadn’t left the line like Peter Brock you probably would have seen it and missed it,’ one person commented.

“If you couldn’t see it and know instantly that it was going to run light by its speed, you shouldn’t have a license. You may have been technically right, but you caused this crash,” another wrote.

“One of you needs Specsavers…and he’s not the guy who ran the red light,” said a third.

Attackers kill 18 in attack on city hall in southern Mexico