At six-foot-six and a mighty 301 pounds, Carolina Panthers defensive end Henry Anderson looked otherwise perfectly healthy. But in October, the 31-year-old suddenly suffered a stroke that threatened to end his playing career.

Anderson says he was home on October 22 when he started to feel his legs going numb and found his speech slurred.

“It was a stroke, so it’s basically like a blood clot in your brain,” Anderson explained, ESPN reported.

The player was rushed to hospital where he underwent a battery of tests. Doctors found the blood clot in his brain and sent him to surgery to have it removed.

Carolina Panthers’ Henry Anderson #94 during warmup before the game against the Los Angeles Rams at SoFi Stadium on October 16, 2022 in Inglewood, California. (Harry Comment/Getty Images)

Since the operation, Anderson now says he feels he is back to full fitness.

“I was very lucky to avoid anything serious,” he told Fox News.

“I mean, I feel absolutely fine. Like I said, it’s not like an injury like a knee or a shoulder or something that you have to rehab and get the strength back and everything. It was just something that, I felt pretty much back to normal as soon as they released the thing,” the player added.

“I’m a football player,” he said, according to ESPN. “I’m cleared to play, I want to be out there and play football because that’s what I love to do. I’ve been injured a few times in my career, and it’s always a bit overwhelming when you’re injured and not with the team, so if the doctors say I’m ready to go, and I have clearance, I want to be there with my guys and play with my brothers.

Still, doctors haven’t been able to determine how or why he ended up with a blood clot that nearly made him an invalid. 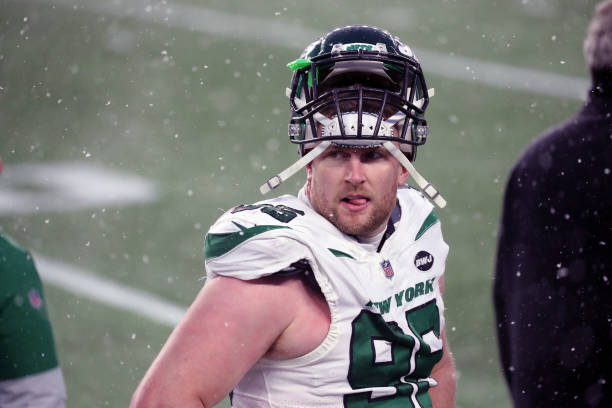 Henry Anderson #96 of the New York Jets follows the action in the snow against the New England Patriots at Gillette Stadium on January 3, 2021 in Foxborough, Massachusetts. (Al Pereira/Getty Images)

“Every test we’ve done has come back negative,” Anderson added. “It was just something where I was unlucky, honestly.”

Teammate and defensive end Brian Burns said he was shocked to learn of Anderson’s medical scare because the player “was so young and he’s an athlete,” the AP reported.

“He’s like in top form. I feel like most of the time when I hear about strokes it’s from old people or obese people or maybe because of heat stroke, or something like that Burns insisted.

Anderson has now been removed from the disabled list and is waiting to see if he is cleared to play.

It wasn’t reported if Anderson had taken the coronavirus vaccine, but at the start of the pandemic he was with the New York Jets, so it’s likely he was because New York had a rule. that athletes could not play unless they were fully vaccinated.

For the 2021 season, Anderson played with the New England Patriots. This is his first year with the Panthers.

Missy Elliott was super drunk in the "work it" Music video, plus 14 other juicy facts about women in music

Jennifer Lopez apparently takes on Ben Affleck at the Grammys

Biden’s State of the Union prep: No acronyms or tips for beating a stutter